I got a text from my sister earlier this week that was so exciting I have to share it with you. She’s out in New York City, so we rely on tech to catch up on fun things, like our obsession with “True Blood,” “Top Chef” and the cutest new meme on I Can Has Cheezburger.

As a bit more background before dropping you in the middle of our random text conversation, I’ll just note that she recently went from being a pescatarian to a vegan. (This fact isn’t really important. It just helps give some context.) So here’s the text:

“Veganism’s going good but I miss cheese. AHH! I AM PROBABLY GOING TO GO SEE THE ICHC MUSICAL THIS WEEK!!! AWESOME-SAUCE, right?!”

I’ll give you a moment to process your first reaction (presumably: “Isn’t she cute!” Yes, we’ve got all sorts of adorable up in here) so we can move on to my first reaction. Namely, I Can Has Cheezburger… THE MUSICAL?!

Of course I had to know more. And what do you know, good ol’ WSJ had the story! Apparently the ICHC musicLOL was created by two 20-somethings in an inspired effort to take Happy Cat and LOLrus to the stage. Word of the endeavor was like music to the ears of the ICHC tech chief, who said, “I find it truly remarkable (and, again, humbling) that the community is so engaged with the site, finds it so special and meaningful, that they are inspired to do things like the musical.”

Seriously! Talk about an engaged audience.

Another message I received this week was a request to publish the Search Engine Relationship Chart® in a media industry magazine, and since it went over so well last time, we’ll play the initial reaction game again.

So my first response was, “Yes, of course!” My second was, “It’s a darn shame they can’t use the histogram Flash version of the chart in their print publication. That thing’s cool.” I’m talking about this here visualization of search engine partnerships over time.

BCI drummed up the first Search Engine Relationship Chart nine years ago, and in that time a chaotic web of players: 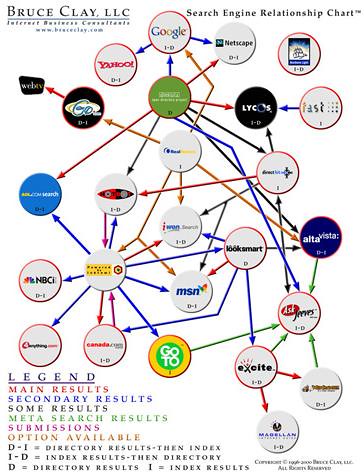 has morphed into a few small partnership clusters:

There’ve been almost 20 different charts since 2000, and moving from one to the next is like a captivating romp through search engine history. You might enjoy giving it a spin — if only to remember how young/old our SEO industry really is.

Reading about the musicLOL and flipping through the different versions of the SERC got me to thinking about engagement. The Search Engine Relationship Chart is, after all, an Engagement Object™ (as we like to call nifty interactive elements of a Web site). The Web has been evolving into communities and has been fostering multi-user communication for some time. By now Web 2.0 is old news to search marketers who stay up on trends and user behaviors.

Certainly, the movement toward shiny new technologies and models — like the app phenomenon — are underway. But is it possible that some are losing sight of where we are today in the haste to catch the next wave? There’s still so much to learn, explore and understand right in our own backyards, our own online communities.

Has everyone got it all figured out? If you do, maybe you’d be so kind as to share because there sure does seem to be some uncertainty in the SEO and social media industries.

There’s been some debate over blog comments, for instance. One set passionately argues that a corporate blog should have comments, otherwise that company is cutting off the value derived from a blog. The other side of the argument says that blogs don’t need comments, and can, in fact, suffer from spam, negativity and a resource drain when comments are made available to the community.

But a look at the comments on ICHC pretty much dispels the myth that comments don’t matter. There’s an entire community that rises to the challenge of butchering perfectly good English in an effort to have fun and relate to one another. Comments on a blog aren’t the only way to grow that kind of interaction, but it’s certainly a popular one.

I’m inclined to think that the means of interaction can shift and change. The engagement doesn’t have to happen through text — it can be video, it can be a page that aggregates member achievements, it can be virtual currency, it can be a quiz they fill out or even just a way to share with others. I’m learning that we haven’t begun to exhaust the interactive possibilities of the Web and community building. But you do need to speak the same language — even if that means making up the language!