A little Twitter with your marketing? Gettin’ tweety with it!

Okay, I’m not sure I’ll be leaving New York with my sanity intact, but I know you like it that way. Drum roll please: 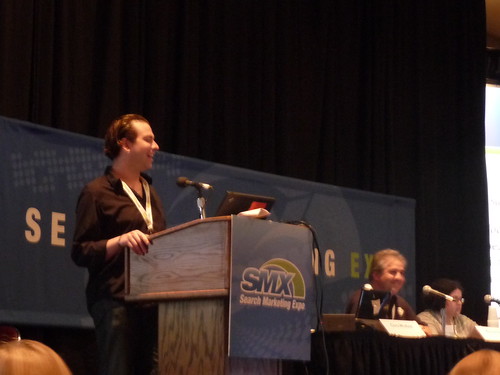 Chris Winfield wants this session to be as interactive as possible — because that’s kinda what Twitter is about. It’s not about structure. It’s not about rules. And when he does a presentation about Twitter, he likes to have Twitter do it for him. With Twitter you can tap into so many people and get so much information. And that’s takeaway number one.

You could read lots of books on marketing with Twitter, but the problem is, a tactic on Twitter could work for one company and not for another.

So first he asked on Twitter, “How do you define marketing on Twitter?” Here are some responses:

“There’s lots of spam on Twitter. But what’s the worst form of it? Why?”

“How are you leveraging Twitter to help get you more links and traffic to your sites/blogs?”

“Are hashtags important? How do you use them?”

“Is Twitter’s real time search really a threat to Google?”

“How would you convince a company (in 140 characters or less) that Twitter isn’t a waste of time?”

Tamar Weinberg takes the podium next. “Participation in marketing” means marketing yourself by being involved in communities. She’ll be sharing some case studies with us.

Tyson Foods had two initiatives. One was a give away through a comment contest on the blog. For every comment made, they donated food. They also started a blog highlighting those running food pantries. Caminito Argentinean Steakhouse has a blog, a YouTube and Vimeo channel, they’re on LinkedIn, everywhere. Their blog includes lots of instructional videos about preparing food.

Twitter gives you immediate feedback, the ability to easily connect with people, and faster customer service. API applications got Twitter off the ground, enabling developers to make powerful applications that also help marketers.

Dell made $3 million in 2 years over its Twitter stream. Can small companies do the same? Check out Mimobot’s word of the day contest and Namecheap’s contest.

What about in saturated markets? An Apple app offered a freebie that complemented the product. Twitter gave them access to an older, tech-savvy demographic. One week is all it took to become one of the top 30 paid apps.

JetBlue’s Morgan Johnston helps Tamar all the time and also helps others. ComcastCares is the major case study. It extends to client acquisition, too!

Look to Zappos to see an organization that gives users firsthand knowledge of the culture. She doesn’t think Amazon would have acquired the company, at least not for as much as they did, if there wasn’t public awareness around the brand.

Oh Nuts is a small tri-state area candy store. They use Twitter for contests and giveaways. They monitor keywords for the biggest selling products and seek out tweets and respond. They get lots of traffic to their site from Twitter and a higher feeling of connectedness.

Contests: bring visibility, especially via the use of hashtags.

Customer service: don’t forget people are talking about you, even if you’re not involved in the conversation.

Next, Chris promises us that Michael Gray will have an entertaining presentation. No doubt. This is going to be about commercial accounts, not personal accounts.

What are your goals?

How big can you grow your account? You probably won’t get several hundreds of thousands of followers. But you can grow, even with a smaller brand.

Automate without being a robot

When it comes to Twitter for traffic, for a lot of the site’s he’s seen, Twitter is among the top five referrers.

Tools of the tweeter:

HootSuite and EasyTweet let you manage multiple accounts and schedule things.
URL shortening should have 301 builder and tracking.
TwitterHawk is a paid service that lets you respond to different keyword mentions.

Thanks for posting this.