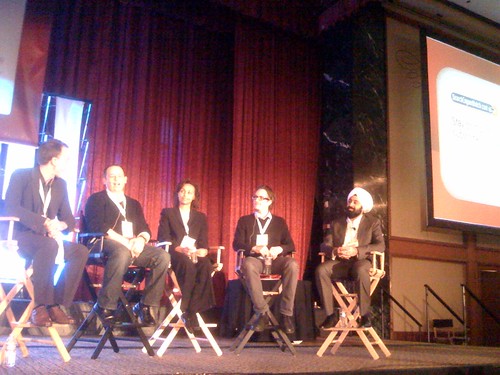 Terrence is going to start by sharing what his company has done on YouTube and the success they’ve had. They do viral videos, product demo videos, and lifestyle videos.

Sales and revenue went way up!

A demo video lets them tell unique stories to those consumers who already know about the product. To those who are just researching and are unfamiliar with the brand, they’re able to talk to them in a familiar way.

Now people are making their own videos and it’s building engagement.

Zach wants to know about how Promoted Videos have been working out for video creators?

Baljeet says that it’s a relatively young product, but it’s already showing good results for small and large businesses alike. The premise is that there’s a ton of content on YouTube, so advertisers that want to make sure their content is surfaced in a relevant context can benefit from Promoted Videos.

Zach says that YouTube also offers overlays and other kinds of ads.

Baljeet says that there’s video sponsorship, video overlays, and other ad products, and they tailor ad products to the way users act on their site. They don’t see a small or large brand divide in the kind of ads that perform well on YouTube.

Ian says that the same way that YouTube has millions of hours of content, its hard to reach your audience simultaneously. When it comes to advertising on, around or between videos, the process has become rather automated. If that’s your goal, the thinking has mostly been done on that. In-stream, over-stream, pre- and post-video are all available.

Rachel says she’d encourage people to move beyond the video stream metric and to an engagement analysis with three levels:

It’s up to the video owner to use tools to track engagement. If you’re a company that sells pre-roll ad, you may be leaving money on the table if you’re not showing a video in the middle if it’s a video that everyone’s watching through to the end.

In social media, a lot of the links point to video, Zach says. Ian says that social media is a great distribution channel for content. High velocity is something that’s so hyper relevant that it’s going to spread far, fast. Video of the Chatroulette piano guy Murton spread so fast that Ben Folds decided to imitate Murton’s style at a concert. It came back around to a celebrity wanting to get in on the joke. That’s high velocity.

Rachel says that when it comes to social media, you can actually focus on volume metrics (the two metrics she separates are volume and engagement). The goal is just to get the video in front of as many people as possible, so volume is a sufficient metric. Another thing you have to pay attention to is production cost. Is the video a step in the conversion path? Therefore you have to factor in the cost of the video in order to calculate ROI.

Baljeet says that you can also compare paid views versus organic views, and the more paid views you see you’ll notice more organic views as well. Rachel says that referrals is a good metric, because it might factor in to your conversions. Baljeet asks the audience to please make their video embeddable. You’re just doing yourself an injustice for social media.

What tools do you use to track views and conversions?

Rachel says that the options include Omniture, Webtrends, Coremetrics, Google Analytics. You can use any of these tools, but you may not always have out-of-the-box reporting and may need custom built reports. Then you decide if you want to do milestones or view time length.

In your experience, how much do you have to spend to create a video that’s worth a million views?

Ian says that it varies and some of the charm is that it can cost very little to do. How much does it cost to start a business? You can start it with $10,000, but that’s not a measure of success.

Baljeet suggests looking at Orabrush for an example of a video that has 8 million views and probably spent less than $5000 to produce. The Hunt for Gollum would have been the fourth largest grossing movie if it was released in the theatre that weekend. It was produced for $5000.

If you’re paying to create videos and post them to YouTube, how can you prevent competitors from advertising on your video?

Baljeet suggests disabling monetization. There are some ways to filter out competitors, but your best bet is just turning off ads completely.

Ian says that he doesn’t put the sites into buckets, but Blip.tv has great video content creators. Other platforms are choices by the other content creators themselves as to what share they get of the revenue. When he’s associating brands with content, he’s going with scale or talent.

Zach’s changing gears to TV, searchable TV, set top boxes, and the future of watching Internet in the home.

Ian says there are 3 important things around set-top boxes like Boxee: 1) access (free), 2) open (API hooks, opportunities to leverage existing platforms or anything else with an API), and 3) community (let your friends know what you’re interested in, automatically when you grant it access to).

Baljeet says that it’s basically the first ad network for TV advertising, built on the premise that advertisers want to have a broad reach and scale, without having to contact each network directly. He says it skews toward direct response advertisers.

Ian says to look for “how I landed an ad on Glenn Beck through Google“.