Day two and the room is slowly filling up. My expectations are high this morning because Li Evans built them up last night. If this sucks, blame her. If it’s great, same goes.

The lights go down and Mike Grehan starts us off again with some housekeeping. You don’t need to know this part so I’ll skip it. Hi Mike! He intros our keynote speaker next. Welcome to the stage BJ Fogg, @bjfogg, Director, Persuasive Technology Lab, Stanford University.

BJ warns us that some of his talk might be wrong but he wants us to think about it critically anyway. Well, okay then.

Story time: He was starting his day in his email, as we all do. There was a Facebook photo tag notification. He clicked on that to see what it was, then checked his news feed, then read something else then… realized he wasn’t working. He’d been triggered and distracted from work. Stupid Facebook. (Heh.)

Facebook is doing something right, though. They’re triggering our behavior in a way that’s changing things and it’s leading to their massive growth. They put “hot triggers” in the path of motivated people. It’s become his design mantra. It’s not a new concept. In some ways, it’s something that’s always happened.

[Video: Henri gets triggered. It’s a Lego wandering through Amsterdam hundreds of years ago. Go with it.]

Hot triggers in the video: Bartender asking for a drink, someone asking for payment.

You need to figure out how to do this in a channel, in front of their customers. Test your UX before you dive into database and tailoring. You have to learn the unknown.

Technology can do this more, and more effectively.

Facebook has dozens of hot triggers — games and news and messages, etc. Love it or hate it, it’s the number one persuasive technology of all time, in his opinion.

Twitter also does hot triggers well. Links, hashtags, specialty feeds. If they’re following you, they decided to do that for some reason, so they’re motivated.

Email is the granddaddy of putting triggers into the path of… possibly motivated people. Sometimes it works and sometimes it doesn’t.

Mobile will be the path more and more for delivering hot triggers.

Search is a venue but it’s a different one. Search is task oriented, unlike social. Users don’t want to be taken off their task, it’s not a good place for hot triggers. However, that’s basically what AdWords is. Hot triggers that take you off your task.

What do today’s tech dramas teach us about hot triggers? It’s about those who control the hot triggers.

What will happen? No one knows for sure. Yesterday’s platforms let to new rituals which lead to new platforms.

You know you’ve got a platform when… people put you to put hot triggers in the path of users. True for Google, Groupon.

They work on big projects. Both because it’s more interesting and because there’s no point in trying to solve small problems. They’ve launched an experiment called BehaviorModel. You can also go to BehaviorGrid.org.

bit.ly/purplepath is a behavior guide that you can request. It’s very Alpha stuff.

B = mat is his equation for how the world works. 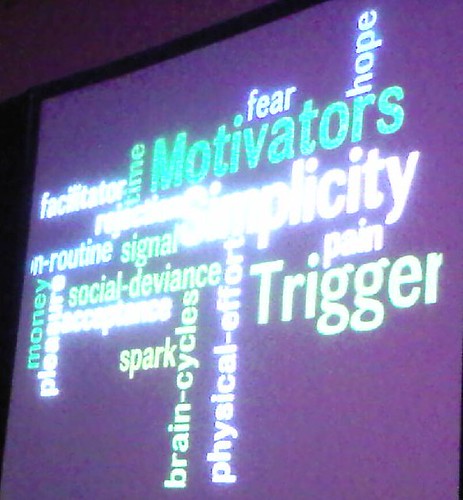 There are a lot of weird and complicated factors in the social sciences. But he wanted more organization which is what the BehaviorModel project is about.

The good news is that humans are (fairly) predictable. 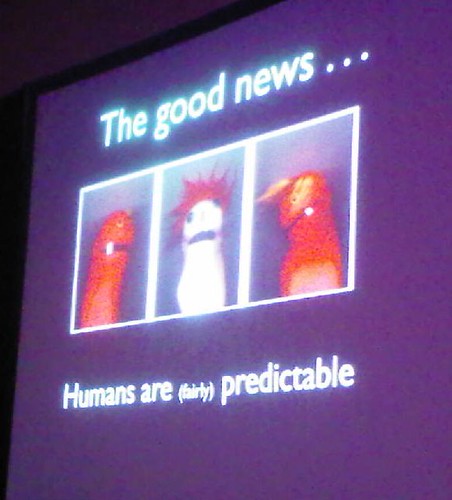 The dudes in the slide above are named MeasureU, DailyGulp and StepUp.

If you’re trying to change behavior, those core motivations are not the first thing you target. Mega-motivation doesn’t work. It feels manipulative and heavy-handed. Use the lightest touch that works. eBay did it well using their feedback systems, LinkedIn uses the number of connections to motivate.

Key Point: Often enough, if mat are not present at the same time, there will be no behavior.

He gave up popcorn for a month. [That’s just tragic.]

Increase ability by simplifying, not by training. Training doesn’t really work. You have to simplify.

Yay, puppy video! His dog Millie knows that to get the ball kicked so she can chase it, she should put it right in front of you so it’s easy for you to kick it for her.

Make it so easy that they can’t do anything but what you want them to do. Make the task EASY.

People must be able to do what you’re asking. 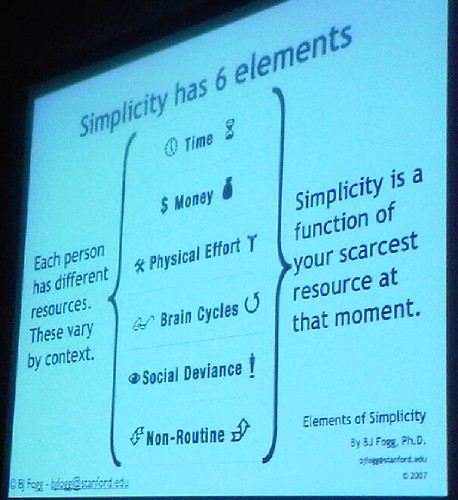 If one of the links breaks, it’s no longer simple and the behavior won’t happen.

The user has to be more than motivated and able. She also needs to be triggered. Triggers have to be put in the path of the person. 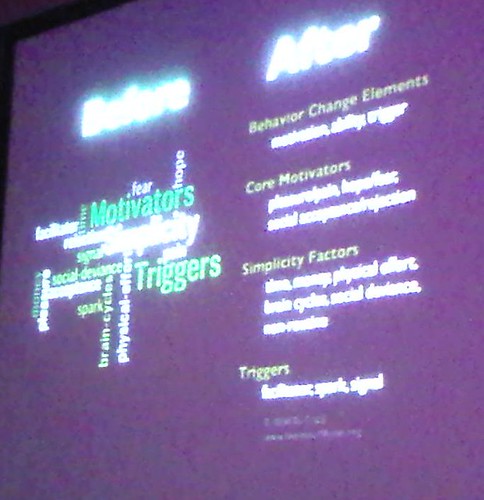 What is a “hot trigger”?

If humans don’t change, why is MySpace getting its lunch eaten?

He thinks it’s because Facebook does it better. MySpace is still compelling to some people though.