Day two and I’m sitting next to Matt McGee getting ready to liveblog this keynote Q&A. It’s going to be a jam-packed day today and we’re off to a good start. On my other side is a Real Live Journalist from the Wall Street Journal. It’s all official and professional and old media and stuff.

Yusuf’s mic isn’t working so Danny translates that his job is to kill Google. Hee. His actual job is running their search space including Bing and MSN. They play a short video and include one of those silly Search Overload commercials I love so much.

Yusuf feels like their first year was a good start. They’ve got a long way to go still but they’ve grown 20 million new users in the last year and grown 4 points of market share.

Danny: Some of the ideas have been a bit out there. Bing-a-thon was out there.

Yusuf: When you’re number 2, you need to get out there. No one was sitting around saying, “Gosh, I need another search engine.” When we showed people the product, they liked it but we had to figure out how to show it to people.

Yusuf: Yeah, actually. People see it and say, “Did you know about that? Did you know you can do that?” His kids are Bing loyalists. His daughter brought a list to him of people who use Bing in her class (versus that Other Engine). There were four Bing users, including a boy who likes her and not including her best friends. “Daddy,” she said, “we have a lot of work to do.” Awww. [Matt McGee got a close up picture of the list. It’s over on Search Engine Land for people who want to try to read 8 year old writing.]

Cashback didn’t show the growth and change of behavior that they wanted to see so that’s why they’re ending it next month. They’re trying other things. Taking risks with the left rail, trying new promotions.

Danny: How did you get onto the iPhone and in Safari? Did you just have to write Jobs a big check?

Yusuf: It started with our IPhone app. You get to learn a lot of people from their mobile phones and that let us do a really good job of building our mobile search, better than our Web in fact. It’s a really popular app and so Apple came to Bing and said “Hey, we’d like to bring this in because it’s a good user experience.”

Yusuf: Uh, yeah, we can’t disclose our terms with Apple.

Yusuf: We’re investing ahead of the curve. There’s money in research, in distribution, in marketing because at the end of the day there’s a huge opportunity there, not just for Bing but for the industry. The more people use it, the more they like it.

Yusuf: The things that have really resonated are the visual representation, number one. The look and feel are really something users like. The home page in particular, kids like especially. They focused on accomplishing tasks, like in verticals like Travel (by buying Farecast —Susan) and Shopping, Recipes, snow reports, instant answers, images. The most popular vertical are images and video. The most growth is seen from Travel, shopping, health and local.

D: Apps for Maps was rolled out. How’s that going?

Yusuf: Yeah, we haven’t promoted that much but it’s a really great product, you can overlay information on the maps and really see where things are happening. They have a new release coming out in about a week to allow developers to develop their own mash-ins. They haven’t implemented their live feed yet. They’ve built an actual 3D model of the world so that you have interact with it.

Yusuf: Going to do a quick demo, it’s based around social and real-time social feedback about things in the world. Bing Social vertical. Trending topics on the left rail, sources below that, timeframe below that. Real-time public updates about a topic, shared links (from Facebook and Twitter without users names). The information from Fan Pages (not public status updates) is pulled for the Public Updates tab. You can pick most recent or best match. (HEY! There’s Paula’s tweet about SMX!)

Better access than any other engine, he says. This should be live within the hour.

There are clear use cases where people see the power of social. You need to get in on the main page. It makes sense that you would add information from social into the SERP.

Yusuf: We really studied what happened in search. People think they sit down, type in just 2.8 keywords and they’re done. But that’s not what happens. They actually go through a long process, doing research, reading, etc. 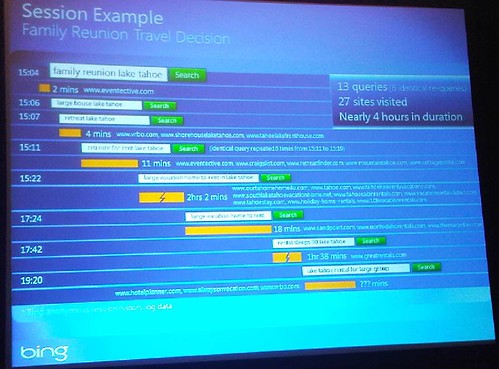 Search isn’t perfect today. How can we make this better? In the classic shopping search, it takes 40% of people more than a couple weeks to finally buy.

Mobile versus traditional search: On mobile phones, 65% of people make their decision in an hour (slide says 70%, 80% completed in one day). It’s a big difference.

D: You call it a decision engine but are you really there?

Yusuf: We still have miles to go. People say we’re doing pretty well but there’s still a lot more to do. We need to get more data, more signal data and then we need to build solutions. We’re only in the beginning of that.

D: What’s the timeline on Yahoo?

Yusuf: They’re looking to move algorithmic and paid search marketplace by the end of the year. it’s about building a number 2 marketplace so that we can compete with the big guy (it’s kind of sadorable that they won’t say Google).

D: You’re all now in the Bing-plex. How’sthat changed things? Do you need to call into the mothership?

Yusuf: There’s a better espirit de corps. It’s more of an urban feeling now. We still feel very connected to the rest of Microsoft. They’re not getting the Bing logo on the building for some reason but they’ve learned to turn out the lights so that it reads Bing in lights at night. Hee.

They have an update in their webmaster tools today at 10:30 (upstairs). There’s also a write-up at Search Engine Land.

Q: When will Bing be powering search for Yahoo and will their smart answers and rich snippets stay?

Yusuf: Algorithmic and paid search marketplace before the end of the holiday in the US. Yahoo will still have the flexibility to add things on top. They can use ours or build their own, that’s up to Yahoo.

Q: Will Bing take a brave step and publish some sort of statistics — number of users, user sessions, queries? Something we can use to analyze your demographic? NO one has good estimates, right now.

Yusuf: ComScore has good aggregate data. If we publish, there’s no comparison across engines. He’s open to looking into the other things that the questioner was asking for.

Q: Will Microsoft keep Yahoo Site Explorer or at least keep the numbers and features that they provide?

Yusuf: We’re in discussions with them about that and planning what we’re going to keep, what they’re going to build new, etc.

D: They (the audience) especially want you (Microsoft) to launch Bing Site Explorer.

Straw poll of the audience pretty much matches his daughter’s independent research.

It’s Bing’s birthday. So there’s a cake! Yay cake! And there’s CUPCAKES! At the Bing booth! Also, search marketers can’t sing. No, really. I’m ashamed to know all of you.