A new “non-financial” partnership between MySpace and Facebook called Mashup with Facebook launches today. This new feature, accessed from MySpace’s home page for its users, integrates information from the “like” data a person has on a Facebook account to personalize the entertainment experience for the MySpace user. Questions about privacy arose once again from attendees of the announcement webinar at noon, but the companies assured that the data transfer is no different than the Facebook Connect function currently on more than 1 million sites. 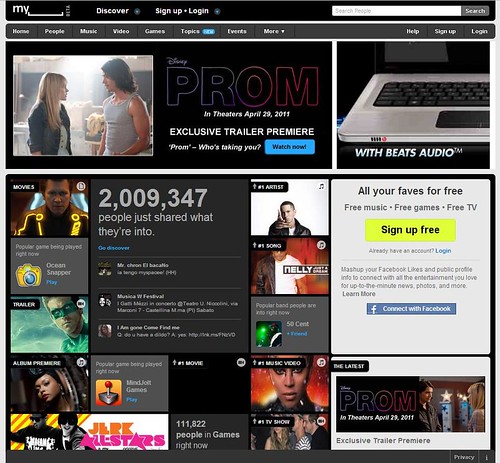 It’s not surprising that Facebook and MySpace are latching up; Facebook has been smart about capitalizing on new channels where the partner company could benefit from the Facebook brand in some way. In the webinar today, Dan Rose, the vice president of partnerships and platform marketing at Facebook said Facebook has always favored focused innovation. To me, this means finding new ways to break into new markets.

When Zuckerberg announced the Facebook-Microsoft partnership last month, he noted it was a perfect match because Microsoft was the underdog and in “a structural position where they’re incentivized to just go all out and innovate.” Translation: desperation with nothing to lose.

And now with MySpace’s owner, News Corp., breathing downs its neck, seem like it’s a perfect time for MySpace to jump on the Facebook train. Recently, News Corp. COO Chase Carey said of MySpace that “the current losses are not acceptable or sustainable.” One article states the category in News Corp.’s financial report that’s dominated by MySpace lost $156 million in the quarter ending September 2010. But one report states MySpace is still projected to bring in more than $350 million this year.

In a chat through Skype this morning between myself and Scott Fowles, one of the analysts here at Bruce Clay, Inc., we speculated on what the announcement could mean for both MySpace and Facebook:

Scott Fowles: The strange thing is that they recently went into a whole new vertical, which is non-competitive with Facebook. Why not with Sony or some other entertainment company? That’s the vertical they are in now. Not social.

Scott Fowles: That’s very possible. This year has been the biggest shift in the Internet in the past decade.

Scott Fowles: Also what’s in it for Facebook? A joint venture between the two seems to work only to MySpace’s advantage unless Facebook is buying MySpace.

Jessica Lee: Just one more outlet for Facebook to dominate.

Let’s look at the points of entry Facebook now has under its belt: Microsoft, which powers Bing, (which now powers Yahoo!), not to mention tons of online services geared specifically to work in conjunction with companies like Facebook. Take the Web browser RockMelt, for example, and Microsoft’s Spindex. Now with MySpace, Facebook has a new social entertainment channel to capitalize on.

But how long has this partnership with Facebook been in the works? An article in USA today might have revealed a hidden gem in a quote by Jason Hirschhorn, co-president of MySpace, all the way back in March of this year, saying, “When we think about Twitter and Facebook, we don’t think about competition as much as we think about partnership, distribution and synchronization.”

Positive MySpace Changes Make It a Viable Option for Facebook

MySpace has seen a lot of changes recently. Former MTV exec Hirschhorn was co-president of the company, helping to fill the COO position that was left open when Owen Van Natta, former COO of Facebook, left in February of this year (I wonder how much he regrets leaving Facebook at this juncture?). With former MTV leadership in the house of MySpace, seemed like it had the power behind it to dominate online social entertainment. Now, the CEO position is filled by Michael Jones who served as co-president of MySpace with Hirschhorn, and then served as president — are you keeping up? Jones was a former executive at AOL.

Then we’ve got our friend Tony Adam heading online marketing at MySpace, joining the company in the early part of 2010. Adam’s background includes years of experience in the SEM/SEO industry with companies such as Yahoo! and more. He’s had some really positive things to say about MySpace investing efforts into progressive online strategies.

The result of all this change? The redesign of MySpace this year not only revamped the user interface, but rebranded the experience from being just a “friends”-centric place to being an entertainment destination that’s socially powered and personalized to the user. In the webinar today, MySpace said that although its new changes have only been live globally for a few days, they are seeing positive results in analytics.

MySpace was always annoying to me. Not sure exactly why, but I quit going to my site there some time ago – even before I found FaceBook. Long live FB – I guess. . .

Hi Evelyn, thanks for the comment. I, too, stopped going to MySpace like eons ago (I remember when Tom was an actual friend that you could actually talk to). Now, not knowing my password or how to even get into my Hotmail account that it’s linked to, all the pictures that chronicle my life in my early 20s are gone (sad face).