Day two keynote. I have orange juice, not coffee. I may come to regret this decision later but for right now, I’m going with it. The wireless is incredibly bad, and yet, still miles better than the in-room wireless at Treasure Island. There’s a blender on the stage in front of me but no people yet. Some guy is taking a picture of the blender. This is what we’ve come to.

Oh yay, Brett’s here. I can stop babbling. He says the Wi-Fi upstairs will be better than yesterday. Which was still better than Treasure Island’s. 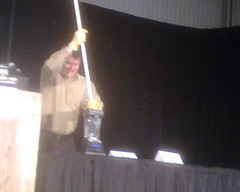 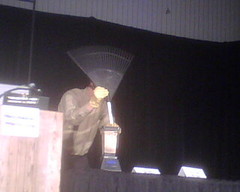 He started with Blendtec two or three years ago. It was a small company with a good product but no brand awareness. Very few people had heard of them. We’re going to be watching lots of videos.

We’re starting, of course, with the iPhone blending video.

The blended iPhone was put up one eBay and someone bought it for $1000. They donated that to a local children’s hospital. The winner of the auction did some research and donated more after that. Wow.

Blendtec began in Utah. They have lots of popular commercial products. They also made a home product, which is the one that he has here today.

They didn’t have money for a brand campaign ($50), so they had to do something cheap. He went into the demo room and discovered a pile of sawdust on the floor. “Don’t worry, Tom’s just testing the blenders,” someone said. He’d blended two by fours to test the blender. Everyone else just accepted it but George saw potential.

Video extreme blending was a common practice in the company, but it was unknown to the rest of the world. So, they decided to distribute the videos on the Web.

He spent his budget on a domain name, a lab coat, a six-pack of coke and some things to blend. Marbles, a rotisserie chicken, a rake, a McDonald’s value meal.

They’ve managed to blend almost everything that they’ve attempted. The only thing that didn’t work was…

They sent the blender and the video to Chuck Norris but didn’t get any response at the time. A month ago, they got a call from their Dallas office saying that Chuck Norris was on the radio talking about “his” blender commercial. George calls Chuck an A-List celebrity. Let’s not get crazy.

What really matters for viral video:

The risks of viral video:

Blendtec saw a 700 percent increase in retail sales. Not bad for a $50 campaign!

With commercial sales you should pull through impact. “How do I know that your blender is going to make it through the abuse our employees are going to put it through?” If the retail product can do it, the commercial product can.

The Food Network had actually turned them down before the Will It Blend campaign. Afterward, the network called and asked for a blender to include in their content.

[Now we’re watching a clip from The Big Idea.]

[Now we’re watching a clip from OTM in which there is an argument over whether or not the Will It Blend videos are worth it.]

The old school thinking was, “Why not just take out an ad in the local paper? Isn’t this a lot of work?”

New school thinking understands, “Now the audience knows that all blenders aren’t the same. All this publicity came from a $50 viral campaign so the sky’s the limit.”

You did an ad for Nike. Wasn’t that paid content?

Yes, they did. Nike called and said, “Can we do this together?” George said, “Sure, if you pay me.” Blendtec has done it with several companies, in fact. Will It Blend actually generates revenue. It’s a marketing campaign that generates revenue.

How do you make it take off?

First, if it’s awesome, it will take off. Second, leverage your assets. All your employees have address books. Send it to those contacts and say, “If it’s awesome and you want to share it, please do.” Then, do the same to your customers.

What kind of bonus did you get?

George got a free blender! How do you reward runaway performance like that? It’s hard. He had a lot of fun.

How do your Web sales do?

They’ve done well. But the idea was not to drive sales — it was to build a brand. Building a brand is sustainable. Promotions are not.

Was the 700 percent growth from the launch of the campaign? With what frequency did you launch the videos?

George says it started two years ago and they started out very vigorously. They’ve backed way off because they want to make sure the quality is high because unsubscribing is one click away.

Brett wants to know if he’s going to blend something. Hee!

[Um, I’m going to hide under the table now, okay?]