On this week’s episode of SEM Synergy (audio will be available soon), I talked to Brent D. Payne, creator of the viral marketing success story, Big Watah. Following the interview, Scott Polk, a member of the Big Watah campaign team, Susan and I riffed on the subject, looking at the viral marketing lessons that could be gleaned.

There is also a Big Watah article in this month’s SEO Newsletter which aims to deconstruct the events as they unfolded to see what strategies can be adopted by others. But even between the coverage on the radio show and the newsletter article, there is still more that can be said about viral marketing. Here’s a small collection for your reading enjoyment.

Viral marketing is akin to supercharged communication, often easiest leveraged through online channels. In the newsletter article, I mentioned Jennifer Laycock’s sound advice that when it comes to landing that viral success story, one important point to keep in mind is to try, try again. That recommendation came from part three of a fantastic four-part series Jennifer wrote about the top “commandments” of viral marketing.

In part one, Jennifer explained her recommendation to know your audience. One of the reasons that Big Watah took off so fast was because it was a fun and funny message that the SMX East audience could embrace. The message centered around one of their own and was easy to relate to.

The New York Times has pointed out that the adage “know your audience” has taken on new meaning in today’s world. It now also encompasses knowing how your audience listens. Depending on the message and the means of the campaign, email, video, Facebook group or user-generated ad campaigns may all evoke different levels of interest and participation.

Get your audience to do the work for you

One of the beautiful byproducts of Big Watah was that most of the legwork was done by the audience themselves. On BigWatah.com and search.Twitter.com, you can see resulting flood of tweets that spread the message among the masses. 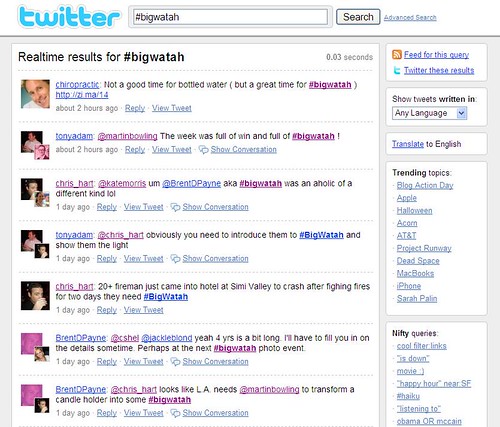 As explained on WebUrbanist.com, “Somewhere along the line, marketers came up with a brilliant solution: let the customers spread the word themselves.” Remember when Doritos aired a user generated ad during the 2007 Super Bowl and the ad became one of the top ten rated commercials of the game? Or the user-gen ad campaign credited with re-establishing the Nike brand among the younger demographic? Yup, it works.

Case study collector Marketing Sherpa highlighted its choice of the top 10 viral marketing campaigns of 2008, while a post over at iMediaConnection examines the stickiness tipping point and how viral marketing transfers from word-of-mouth to the Web. Big Watah is far from the only example of a successful viral campaign. Those interested in launching their own may find value in studying success stories — and not-so-success stories — to gain the insight that comes with experience.

Viral Marketing when done properly can be a huge sucess. BigWatah is proof of this.

Its something that everyone should look into as part of a marketing strategy regardless of the scale of your operation.

A really well thought out viral campaign can greatly increase the ammount of interest in your product and traffic to your companies website.