What Are You Withholding From Your SEO

Aaron Wall had a super awesome article over on Search Engine Land today that asked Are You Giving Your SEO Enough Information To Succeed? Basically, Aaron details the pitfalls that occur when you just tell your SEO that your site is sick and don’t offer up any other information that would help with a diagnosis.

If you’re going to hire someone to handle your site’s search engine optimization or even if you’re just bringing them on as a consultant, you have to be completely straightforward about what your issues are (er, your site’s issues. You can save your issues for your spouse.). Otherwise you’re just wasting everyone’s time as you all keep fumbling around in the dark, never getting closer to solving the problem at hand. There’s no use bringing in an SEO consultant to give you advice on making your Web site more spiderable or search engine-friendly if you’re going to muddle with your robots.txt and accidentally block the entire site or buy links and get yourself penalized. The only way for search engine optimization to be successful is if everyone knows what’s going on and everyone’s on the same page.

I don’t think clients even do it to be deceitful; they just don’t realize. Like in the example Aaron gave, it doesn’t even occur to them that that reason their site has tanked in the engines is because they failed to upgrade their WordPress and got hacked. It’s not up to you to be able to diagnose that on your own. But you absolutely have to hand over all the information you have to your SEO so that he or she can help figure out what’s going on. That’s why you’re paying them.

As a general rule of thumb: Never lie to people who are there to help. Not even in terms of SEO, just don’t do it ever.

Sometimes First Isn’t All It’s Cracked up To Be

Larry Chase starts an interesting discussion over at Web Digest For Marketers saying that Being #1 in Search Results Isn’t Everything It’s Cracked Up to Be as searchers don’t always stick with the first result when searching in both the organic and paid space.

It’s really just one of those things you want to keep in mind because he’s right. And it makes total sense. For example, say you’re interested in buying a new pair of shiny New Balances (I may be in the market…). You go to Google, type in [new balance] and are presented with this: 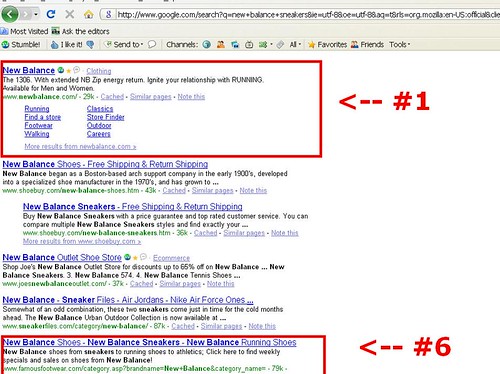 Chances are you may do some research on NewBalance.com and some of the other retailers – you’ll spend some time looking at the different types of shoes, the colors, look at some 360 views, maybe check out the accessories. And then, when you’re on Famous Footwear and finally decide that you liked the show you saw up in the first result, you’re going to buy right there. You’re not going to hit the back button and start redoing your search.

Just something to keep in mind as you kill yourself trying to rank number one for your keywords. Sometimes, especially if you’re a retailer, ranking a little lower can actually play to your advantage. This type of search engine positioning is extremely valuable for businesses.

Interestingly enough, Bruce recorded an interview with Ralph Wilson last week while at SES and they talked about why soon rankings won’t be a metric at all.

If you were at the How to Speak Geek: Working Collaboratively With Your IT Department To Get Stuff Done session last week in San Jose, you may remember that a few digs were taken at Microsoft for not being so SEO-friendly.

Nathan Buggia is asking SEOs for feedback on how to make Microsoft’s development offerings SEO-friendly by default. If you’ve been frustrated with Microsoft in the past, now you’re chance to get some stuff improved. Speak up.

Stephan Miller alerts me to the launch of Bloghology, a new print magazine totally devoted to blogging. It’s old media covering new media. Clever. I like it.

While we’re talking about blogging I’ll also mention that I’ll (very excitedly) be attending BlogWorldExpo on Sept. 20-21. The show was an absolute blast last year and I can’t wait to head back. So if you’re not registered, I’d get on that. I’ll see you there.

Still on the hunt for actionable tips and insights? Each of these recent SEO posts is better than the last!
Bruce Clay on April 7, 2021

How B2Bs Can Make Their Content Marketing Perform Better

Thanks for the link. Just found it today. Google blog search just does not bring up everything.

I can wait for BlogWorld either. Nervous and excited. I haven’t been to any conference yet. Any pointers?