Danny Sullivan welcomes the crowd and introduces the panel. The comedy act you’re missing right now I just can’t do justice to! Alex has been doing SEO for 10 years and focuses on Google News these days. Greg’s new venture is Foundation Digital. Rae’s hairstyle is fresh. Bruce started optimizing sites in 1879. 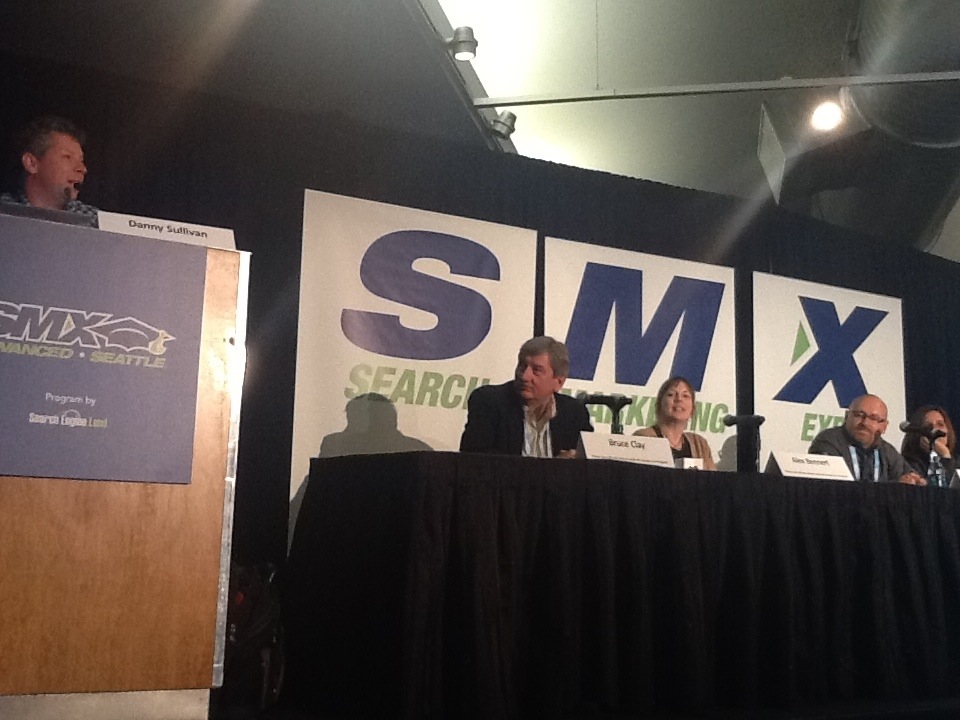 If your audience isn’t on Google+, should you spend time on it?

Greg: Yes, even if it’s not used as a signal now, it will be, so the investment now is worth it. It will only get more important.
Alex: It’s like saying you should pay attention to your Title tags even though a lot of people don’t know what those are.
Rae: A few weeks ago she gave up all her social networks except Google+ to force herself to use it.
Bruce: It wasn’t long ago he called Google+ the best place to hide a dead body. ;D It’s important, hook up authorship.
Danny: He uses it a lot. Don’t worry about duplicating on Google+ and Facebook because people aren’t on both and won’t feel you’re duplicating them. Use it for more than just SEO things.

Alex: It’s honestly tricky. Canonicalization is something I push but Google News is dodgy as to whether or not they read it. It’s a moving target and she doesn’t have a great answer.
Greg: Incorporate canonicalization requirements in syndication agreements. Unfortunately a lot of that stuff isn’t automated at this point and it’s difficult to enforce.

When do you know when your job as an SEO is done? Is it ever done?

Greg: SEO nirvana is when it really is done but you keep coming up with reasons to be there. ;D
Rae: If you rank #1 you may be done but your competition is just getting started.
Greg: You could say Amazon is done; there is a ceiling in organic search, but they keep going for stuff that’s seasonal, getting stuff to pop, focusing on conversion aspect.
Bruce: When you’re done it means you didn’t have enough keywords.

Greg: Spending too much time on what’s now instead of what’s coming. Authorship, contextual relevance to links, things Google is making gains in.
Rae: Total reliance on tools is her issue. Use tools to gather and collect data, but be smart about what that means. Using an SEO tools is like using a calculator – you still have to know how to do math. Don’t follow steps blindly.
Alex: Overlooking the basics. Don’t get caught up in the advanced things. So you might get yourself a top ranking – have you looked at the SERP? Look at all the results there and click on some of them. Does it fit the intent of the searcher?
Bruce: We can sometimes take for granted that we’re entitled to ranking. We forget Google is giving us free traffic, they require that we earn the ranking, and no one wants to earn it. The time, work and budget is how you earn it.
Greg: Content is not really king. The web is littered with sites with great content that don’t rank. It’s a collective sum of the effort of building a brand. Starbucks is #1 for coffee, a lot for what they did offline. It comes from long-term investment in the brand as a whole.

If you could make Matt Cutts do anything, what would it be?

Greg: He’d end (not provided) saying it’s evil and doesn’t have to do with security.
Alex: Pass referrer data in iOS6.
Bruce: They should provide keywords data for everything or take it away from pay per click. (Audience applause!)

Danny looks out to the audience and asks if anyone from the search engines will come up to the stage and answer these questions. Duane Forrester and Matt Cutts both join on the stage!

Referring to the paid side and keyword data, Matt says that he’s only one guy and can’t push the whole organization. He mentions that he’s really pushing for security and recommends the book Little Brother and says it will inform your thinking on the topic.

Bruce: He really likes the disavow tool.
Duane: He asks if people are using it. People cheer and say yes. He says that it took 13 hours before the first disavow report came in and a webmaster disavowed their entire own site.

Rae: She resents the fact that there has to be a disavow it all. You search engines know if you’re penalizing us for links and you’re making us guess.
Duane: The reality is you could ask for removal, and then the site would say ok 5 bucks. But this report gives us a signal. You’re actually a good webmaster. You’re taking care of your site and cleaning things up – it’s not the one individual link disavow.
Rae: Why can’t you just tell us about the value of links?
Matt: That kind of info would be abused by spammers.

Maile from Google said yesterday that authorship should only be on pages written by people who’s called out as author.

Matt: You can put it on a whole site on a blog that you wrote the whole site, he has it on his blog for example.
Duane: How do you expand the notion of who the person is at a trust level, and how do you look at it on other paths, entities. Ten years ago people on the web were usernames and now they go by real names. There’s been an expansion. When you look at Schema.org there are so many in there.
Greg: Authorship doesn’t just have to have a date stamp. It can be an evergreen article. Anything that benefits from credibility.

Danny: How important is it to have a date on a page?

Duane: Put a date on it people! It says a lot about your website, about how you’re curating things. if it doesn’t have a date it says to me you want this to be evergreen because you’re too lazy to update it.
Danny: That’s what I think about all the Windows help files. (Oos from the audience at that diss.)
Greg: Google reacts differently to dated stuff. He hates when evergreen stuff that’s not going to change has dates because you’ll lose clicks over time.
Alex: A publisher has a page that updates sports scores multiple times a day but the date stamp was 2004. It was very frustrating.
Rae: She tested taking dates off and her readers were mad and it also dropped click through rate.
Matt: If it’s really that important, you should be putting love into it. You can put a last updated date on there.

I have thousands of affiliates linking to my site and a percentage of them is practicing black hat.

Matt: We’re pretty good at detecting affiliate links like press release links.
Rae: If you’re using network links, don’t worry about it. If you decided the perfect link building plan was on your affiliates backs and you went through great pains to make them not look like affiliate links, then you’ll have something to worry about.
Matt: Anytime someone says “search engines have no way to detect them” you should turn around and go the other way.

How many more ads can they put on the first page of SERPs? Ads have expanded to take up a lot of space.

Matt: Organic is not dead. Google looked at establishing a threshold for a set percentage of organic vs. ads. The search team can push back when the ads team wants to change layout.
Danny: Now you’re going to have webmasters trying to figure out that percentage and use that as a guideline – Google does it so it must be ok.
Matt: When he gets an email from the ads team asking about spam or search ranking, he has an autoresponder internal video that tells them politely that he can’t answer their questions. Google doesn’t want partners, advertisers or clients to ever think we give an advantage to Google/themselves.

The one big takeaway:

Bruce: Check your link profile, find your weakest link and see if you can fix it.
Alex: Make use of the data in Google Webmaster Tools and Bing Webmaster Tools. You can spend forever in there and have more work and never be done.
Greg: Mobile. Think of responsive design that supports native apps. It makes for an awesome user experience.
Rae: Don’t be generic – products, services, content, marketing efforts, anchor text.
Duane: 5 things to pay attention to, in this order: content, social, user experience, links, SEO.
Matt: Google will keep working on more communication and transparency. On the flip side, avoid black hat and hiring someone who’ll do spammy things. The gap between cool loopholes to exploit and having to clean it up later is going to get harder and harder to bridge. One thing — make something compelling and optimize the user experience. One more thing, mobile matters. You’ll see an exponential curve of mobile passing desktop traffic in the next two years.
Danny: Think social. Search has always been social. When we want an answer we turn to the people we know. It’s not doing social, it’s living it.

it seems it was an interesting and also funny panel. it would be great to see a video recording of it! ;-)