Last night’s SMX After Dark party was kickin’ — thanks Bing!

Oh, and get this. I left my iPhone at the BCI booth and they locked up the expo hall before I realized it. So last night I was feeling a little concerned. You know how it is when A) you don’t have your phone, and B) you think you know where it is, but you’re not sure, so you realize maybe you’re putting your hope in the wrong thing when really you should be looking elsewhere. Ugh!

Luckily the awesome SMX team worked some of their lovely magic and got the convention center security to let me in to get my phone. Thanks so much, Michelle Robbins, Karen DeWeese, and Santa Clara Convention Center Security! This is one happy, mobile-ready blogger!

Now on to the keynote! Peter Norvig, director of research at Google, is beyond impressive. He’s a search pioneer, an author, a rocket scientist and was an “adult partier” in the Nutcracker. And that isn’t even half of the accomplishments moderator Chris Sherman just rattled off. Google and their geniuses. 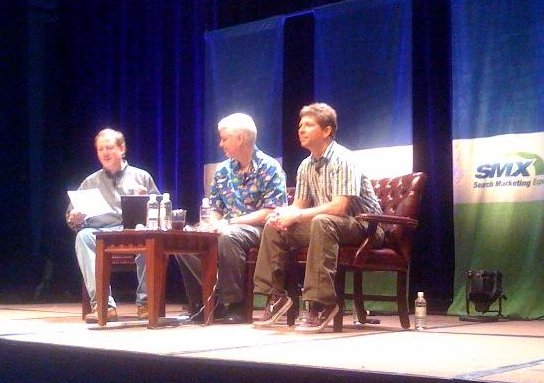 Peter will start by presenting a number of Google’s research projects:

“You can observe a lot just by watching.” -Yogi Berra

Now Danny Sullivan and Chris Sherman will be throwing out questions.

Q: What’s the biggest thing that came out of the 20 percent project?

One story is that both Gmail and Adsense were built by a Googler because he was frustrated he couldn’t search his e-mail. Machine translation is similar. And speech recognition has come so far since its original iteration.

Q: How hands-on are Google’s founders in 20 percent projects?

They’re still involved, but we don’t see them around as much. I don’t think they have their own 20 percent project because their jobs are pretty much 100 percent.

Q: Are your research facilities around the world separated by project or is it you just can’t fit everyone in Mountain View?

It’s both. Some projects you need to have people that are living in the language and culture. Also, sometimes we need more engineers and we can’t hire everyone from the same pool.

I think the emphasis is on the right place right now. Mobile emphasis is appropriate. Are we going to have hand-curated tags or be able to machine read the content? That’s going to be messy but I don’t think it’s overhyped any more.

PageRank is one thing that’s overhyped. Yes, the PageRank computation is important, but it’s just one of many things. It’s got the catchy name and the name recognition, but we’ve always looked at all the available data. The infrastructure that we built

Q: Is there a difference between core search vs. ads vs. other projects?

Yeah, in some sense there’s a separation of the house, just like at a newspaper they don’t let the ad department effect the editorial department.

In other industries you can get trained at school and then step into the field quickly. When people are doing information retrieval in college and then come to Google, after a few months they’ll say, wow this is a whole different world than what I did in school. The books coming out now are getting better now, expanding from library science to search.

Q: What’s the training to become a Googler?

There’s a course they start with, then they get put on a starter project. They get experience and lots of help as they get their feet wet.

Q: Do people move around a lot at Google?

We encourage moving around. We try to keep projects short, three or six months. And you find that people will come up with a new idea as they’re working on a project that they want to develop once it’s over. The infrastructure of departments is parallel, which makes it easy to move around.

Q: Anything you’d like to know from our attendees?

How are we doing?

…I didn’t do this session justice. So much good stuff and my fingers aren’t awake yet or something. Thankfully there’s a whole slew of bloggers covering this session:

Great job done on SMX keynotes for those like me, that are so far away from there…reading you actually from Spain!!

Is it any video feed or recorded video of it?

You’re right, that should be Speech Recognition. Updated.

I believe WebProNews is streaming the conference.