Peter Shankman @petershankman invented a mailing list called HARO. And that wasn’t new. People knew what a mailing list was when he started it. The only difference was that he made it really hard to not read it. When he was building HARO, he came up with four rules for running his business.

$300 billion was left on the table last year due to bad customer service. Consumers don’t expect to be treated well. If you can be one level above crap, you’ll win. Following these four rules will cause you to provide good customer service.

First, some background on him. Peter was in grad school in Santa Barbara studying fashion photography until his financial aid dried up and he moved into his parents’ basement in New York. He was hanging out in the Melrose Place chatroom on AOL. Two weeks later he was working in the newly launched AOL newsroom. While working there he learned two lessons:

Lesson 1. At the time the Internet wasn’t free. It cost you $2.95 an hour if you could connect to a modem. His job at AOL was basic: keep users online as long as possible, because that’s how we made money. Our job is still to generate revenue, but we’ve kind of forgotten because we’re caught up in followers and fans. Followers and fans don’t keep the lights on. Until we realize it’s about revenue and always has been, we’re screwing ourselves.

Lesson 2. Your biggest threat isn’t AOL vs. MSNBC trying to get a hold of a million users. Your biggest threat is Seinfeld — 100 million users who aren’t online yet. You can’t grow if you’re worrying about fighting off a possible competitor. You should be worrying about the customer who hasn’t heard of you yet and getting them. Facebook isn’t about getting you on to Facebook, it’s about getting you to where everyone else is.

With that background set, let’s get to the 4 rules. The 4 rules are simple, and you learned them as a kid.

President Obama won the office on the platform of being transparent. He made his first appointment in Tom Daschle, and Daschle stepped down because of a nannygate issue. He had an interview on national TV the next day and the reporter confronted the issue. Pres. Obama admitted a screw up, and the whole issue was diffused. The next question posed was, “What kind of puppy are you going to get?”

If you own a mistake, you’re 44% more likely to stay in good favor with your audience than if you deny and get caught.

The big mistakes in social and customer service come from lying, denying and fighting with customers. At HARO, Peter found that if he talked about an issue before anyone else did, there was never a problem. If he was reacting to someone else making a claim first, he was playing catch-up and it was tougher to rebound.

In the ’50s, the average age of nightly news viewers was 31. They got the newspaper in the morning delivered by Timmy, and they got the news at night on TV. The average age of the nightly news viewer today is “dead.” Today, instead, you come home and charge your phone, removing it from your person for the first time that day. You turn on the TV, walk away, come back and see that nothing’s blown up, change the channel to Comedy Central, check your phone again and go to bed. We are an audience of fractured attention.

How do you learn how your audience likes to get their information? Ask them. It’s easier than ever. He would email five random HARO email list recipients and ask them how are we doing. When you interact with your audience and give them what they want, they become invested. An invested audience is 78% more likely to buy something from you or otherwise give you money.

Peter donated to an animal nonprofit and got a hardcover coffee book from the organization. He called and asked why they did that, and the answer was they believed they had an older audience that liked print material. He joined the board of advisors and had them survey their donors; 94% said they preferred to get information online. The group got active in social media and created thank you videos for donors. Donations went up 37% in 12 months. They saved $500k in printing, mailing and reproduction.

The attention span of people between 18 and 25 years old is 2.7 seconds. If you have 2.7 seconds to reach your audience, the best thing you can do is learn to write. Ninety percent of interactions online start with print. Half the sites on the Internet have a spelling or grammar error on the home page. Bad writing is killing America. Good writing uses brevity.

140 characters is roughly 2.7 seconds, but before you get caught up on Twitter, realize that mobile is the future and Twitter is just one pipe. Understand the difference is concept vs. brand. The concept is mobile, the brand is Twitter.

Barry Diller is CEO of InterActiveCorp. When he took the helm, he got into the office an hour early and would call in 10 random people from the company a day. He reached out to other people and said hi. The company turned around. Remember his earlier claim that likes and followers are bull—? Mark his words. In 10 months the concept of following, friending and liking will be gone. Instead it will all be determined by your actions in the real world. Have you ever asked someone if they’ll be your friend? The concept is unnatural.

You text someone, inviting them to hang out. Online you socially check in together somewhere. You make another date and make a reservation on OpenTable. The network sees the accumulation of positive interactions and touch-points. If you get into a disagreement and aren’t friends anymore, you don’t need to unfriend someone — you just stop talking.

Every business and person you have an interaction with is like a bubble in a lava lamp. Heat is the accelerant and energy. If you don’t have trusted interactions, your bubble floats to the bottom and doesn’t resurface. That’s what algorithms are trying to create.

Peter was flying home from a trip to Florida. He sent out a tweet to @Mortons Steakhouse and jokingly asked for a porterhouse to be waiting for him at the airport. Morton’s did it, and Peter Shankman wrote a blog post titled “The Greatest Customer Service Story Ever Told.” The CEO of Morton’s was on the Today Show the next day. Revenue doubled over the next year. That’s not scalable and you don’t have to do it for every customer. But when you ask your customer if they’re there for a special reason today and then show them you paid attention, they’ll tweet it and be loyal brand advocates. 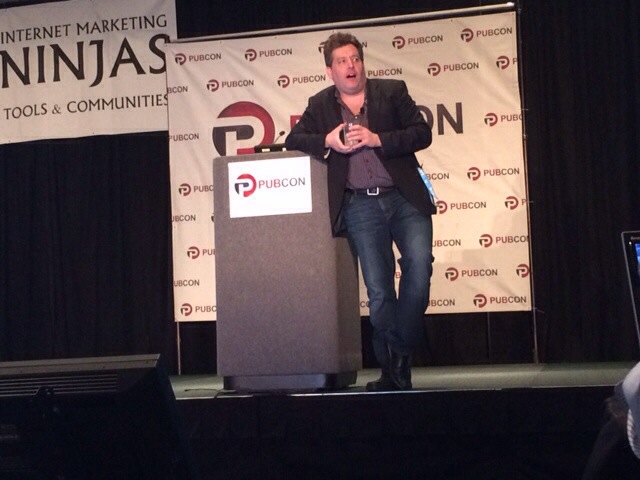