Last week, SEM Synergy broadcast from Hawaii for the Search and Social conference. This year marked the second-annual conference in Kauai from the folks at Wappow!, and gave attendees an intimate setting to learn from and an opportunity to network with industry thought leaders, share ideas and make some lasting business relationships — and friendships — in a relaxed environment.

Virginia held down the fort last week back in Southern California while I hijacked SEM Synergy and took it to the Hawaiian Islands. If you missed the broadcast, you can listen to the full show here, at any time. This week’s show welcomed Gillian Muessig of SEOmoz and Ian Lurie of Portent, Inc., both speakers at last week’s event.

In fact, here’s a shot I happen to take of our guests participating not in SEM Synergy, but in a couch-discussion trifecta in one of the conference sessions (Ian is mime-shooting something with his air rifle. Must have been something he disliked): 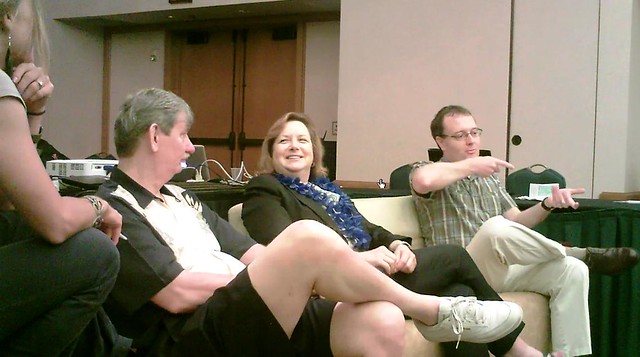 The island setting seemed to put everyone in a laid-back mood, so I thought it fitting to broadcast the first segment of SEM Synergy with Bruce and I poolside, with piña coladas in hand. Here’s a behind-the-scenes look at our studio last Thursday:

We did happen to talk some business. In the first segment, Bruce gives us an overview of key concepts from his keynote presentation at the conference last week. With the event focused heavily on the growing discipline of social media, how to best use it and how it relates to search marketing, Bruce talked about social media’s role in search engine rankings and how search giants like Google will be using social media as part of an ever-developing way to make sure results  are more and more relevant to Internet users.

You can learn more from his keynote presentation, here:

In the second segment, Gillian Muessig, founding president of SEOmoz, gives us a very insightful look into the development of mobile, commerce and marketing worldwide, and the current state of adaptation of social media marketing by businesses. Her chat with me was a mini-extension of some of the ideas she shared in her presentation on social and mobile last week.

She and I also chatted about the value of an industry event like the Search and Social conference, and all the benefits that an intimate setting with specialized activities such as snorkeling, inner tubing and more. Gillian had this to say:

”If you go to conferences that have two to seven thousand people there, your experience is significantly different than if you go to something that’s a seminar-sized or colloquium-sized conference, which is what happens here at Wappow! The ratio of speaker to delegate is very low, they get to coordinate and just connect as networking events happen all afternoon … it’s significantly different than any other conference out there, and just hugely valuable.”

Personally, I went to the conference with an open mind, but didn’t know what to expect from something set on a little island in the middle of the ocean. I emerged from the conference so impressed, and experienced first-hand the value of it all. Attendees of the conference:

For the second segment of SEM Synergy this week, I sat down with Ian Lurie, founder of Portent, Inc., to talk a bit about some very new research he uncovered through Facebook’s Graph API. This research suggested the level of interaction a brand has within its social media networks can actually affect rankings.

What struck me in our conversation and in my time at Search and Social was the level of data that’s available to people to mine and to use within their marketing efforts through the Facebook’s Open Graph and Graph API. In addition to Ian’s research, several other presenters at the conference mentioned ways to use the data Facebook provides in ways that can make a difference, including sessions by Dennis Yu of BlitzLocal and Christi Olson of Decide.

During the segment with Ian, we also talked about Ian’s book, Conversation Marketing. The book, initially published in 2002 and updated since, seemed to me like it had concepts ahead of its time, forecasting how important social media would become in marketing. Ian responded with an astute observation about social media as simply the progression of marketing, not some novel concept that came out of nowhere:

“… Marketing has always worked this way. Everything you did in traditional advertising and traditional marketing – even back to when people were nailing broadsides up in the town square … it was all about putting together a clear message that would get people to respond, and a response was often that they would talk to other people about it. That’s never really changed. Literally, since we’ve been hitting each other over the heads with rocks, it’s worked that way.

“So, I’ve always tried to tell people, ‘Look, if you think of it this way, then the move from traditional marketing to Internet marketing to whatever comes next, is a fairly easy one. It’s more about just knowing what the new channel is. If you don’t, if you try to treat Internet marketing as some mystical new thing that came out of nowhere – or social media – it gets very, very intimidating.’”

I also happened to snap a picture of Ian during his presentation right at the time he changed his slide (which happened to be the most opportune time): 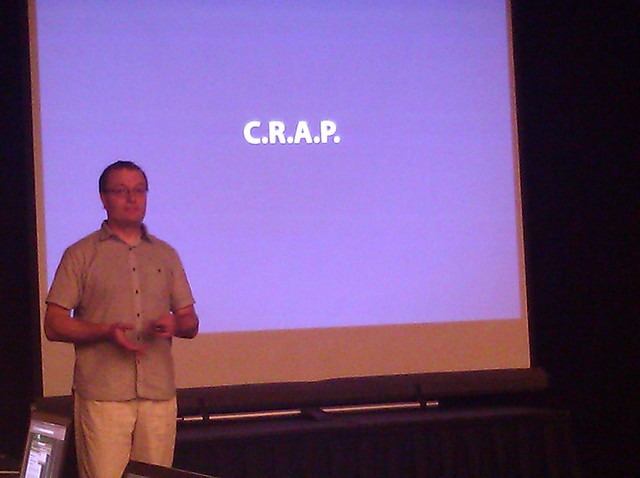 I should clarify that in this instance, “crap” is actually a good thing. His acronym for approaching social media includes: curate, reward, answer and prove it. For more on Ian’s presentation on social media, links, votes and rankings, check out the slide deck.

Finally, what you didn’t see behind the scenes after the SEM Synergy recording was our new friend Danny Hashimoto, an island local, giving Bruce and I an amazing presentation of his cacao superfood mousse – complete with a taste testing (at my benefit).

In addition to his amazing treats, Danny runs a business there that takes people out into the wild of Kauai, hiking and exploring unseen parts of the island. You can learn more about Danny in the following video: