Danny Sullivan is on the stage leading the discussion and taking audience questions. The group just took a selfie: 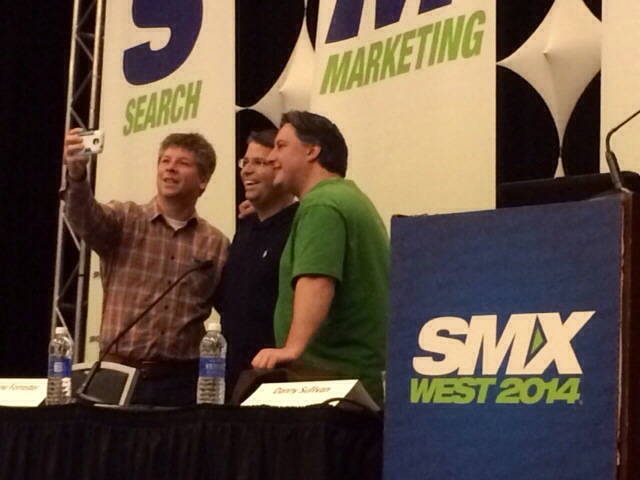 Danny introduces them. Duane says he’s the business facing side of Bing. Matt says that “Distinguished Engineer” just means he’s been around a while but practically he’s the head of search.

Danny: Matt, what was Amit talking about with Not Provided? Seemed like he was saying maybe paid keyword data is going away?
Matt: I’m happy to give my personal interpretation. What I heard was that Amit is happy with the way that we are securing organic search results right now. So, don’t expect query referrers to come back. But he hears the feedback and can see why it may seem like inconsistency, and for that we’re actively working with various teams.

AJ Kohn asks: Has the interaction with the Knowledge Graph increased time and exploration in search?
Matt: When a tool works well people use it more. He thinks they’ll see more incremental searches as a result of making Google more useful.

Rae Hoffman: Recently John Mueller said if you move the content of a penalized site and put it on a new domain that the old penalty might follow you to the new site. Why would a Penguin penalty follow the content?
Matt: If you really want to disavow them, use the disavow tool.

Danny: You’re saying webmasters need to go through Google’s readmission process. You can’t just pack up and go somewhere else.

Matt: The litmus test is if we think you’re just trying to avoid the manual action.

How are new (more than 1k) TLDs coming out going to effect search?
Duane: When people do the wrong things with them they’re not useful. I don’t expect anything from GTLDs from a ranking or search perspective. It’s useful in telling your target audience that this is what I’m about. It’s helpful if you build a rational business around it. Having that extra word in the domain isn’t going to make you more relevant. If they suddenly see that every domain coming up on .guru is a spam site, that makes the whole group suspect. If you’re a brand, pay attention to yourbrand.something — and that has to do with protecting your brand, not with SEO. Has anyone realized that .sucks is now up for bidding? Do you want to own yourbrand.sucks or chase someone down if it becomes an issue?

Matt: Google says that if a TLD does a really good job and requires certification or proof of an elite group, that could be a positive signal but they generally see the opposite is true.

Is learning how to filter out hacked sites a priority of search engines?
Matt: Hacked sites is a priority. There are few companies on the web helping people identify if your site is hacked. Sometimes we’ll leave a site up and show that a site has been hacked in the SERP, they’ve found that it’s a good way to notify a site owner that that is an issue. They experiment with ways to notify webmasters of hacking.

Duane: His WP blog has been hacked for 6 years and he uses it as a teaching tool to show bloggers what it looks like. He doesn’t have a notification in GWT that his site is hacked.

Matt: Normally if you’ve been hacked and then repaired it, it shouldn’t affect your rankings long term.

Question about parameter bloat typically due to tracking referral strings.
Duane: Generally like you to keep your URLs clean. The more you put in there the more opportunity to confuse a crawler, cause a duplicate, and that’s why they let you manage this in Bing Tools. Start down the right mental path — sit down with engineering and make sure everyone involved with building a site understands the whys behind requirements. It’s if you’re already in the quagmire that you can get into using the tools.

Duane: Rel=canonical is not your savior. It’s intention is to use it 5 or 10 times across your site.

Matt: The idea is that it’s better to get the URL structure right the first time. Although for Google you can use it as many times as necessary.

Getty’s new embed feature — is that considered a link scheme?
Matt: Is the cause trying to get links or trying to get attribution for an image? It’s likely for attribution in the case of Getty. Think of it like a widget, we’ve given advice on a widget before. What’s the intent? Are the links hidden? Is someone trying to provide something useful? Across the board, the widget links might not count for as much.
Content that’s brought in via JS like Disquss will see that the words are seen as appearing on the page, and the same is true of iframes.

Danny: Google+ embeds? Count as content on the page? Or is that a link scheme?
Matt: Google+ folks are busy enough without worrying about links. 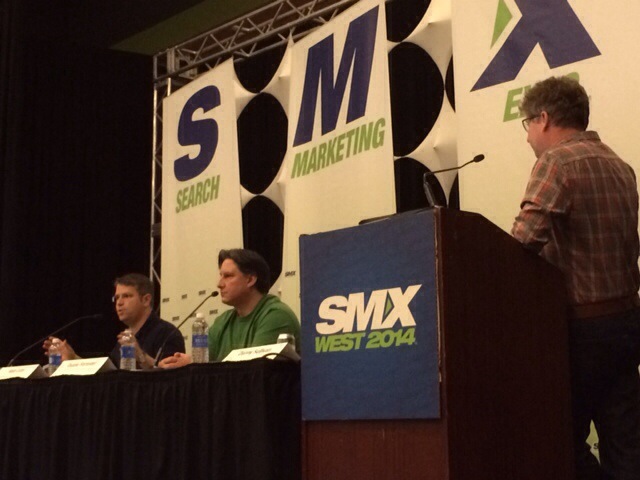 Someone is asking about support from Bing.
Duane: To approach needs when you want to talk to Bing for support, there’s direct email support from Bing. Go to Bing.com/webmaster and you’ll find a link called email support and fill out the form (and then, evidence suggests, complain to Duane on Twitter). Customer care and support team stays on top of it.

Google’s Maile Ohye: If you do paginated content, be sure that if the page number goes out of bounds that the page returns a 404, for example, if you’re calling for page 20 out of 10.

Do you adjust rankings for sites based on having a mobile version of a site for people searching on mobile devices?
Matt: Over time we might explore in that way. We do penalize sites that don’t perform well in mobile — it’s the boost for having a mobile experience that we’re moving toward.

What are you going to consider to be mobile friendly (responsive, mobile specific)?
Matt: There are bad practices and a few valid arguments for the best way to do it for your site. Use fetch as Google to test if your handling is not creating a problem, like an infinite loop.

Penalty handling refresher:
Duane: We don’t level a lot of penalties. Instead we look for trends that we can address on a large scale. There are, unfortunately, a lot of grey areas. We try to err on the side of the website and don’t assume that a tactic suggests a spammer. There are reconsideration requests for Bing if you find you’re under a penalty or block, but it’s more about trust and that’s not counted in 60 days or 90 days. We look to see if you’ve actually cleaned up the problem.

Matt: We try to do as much as we can algorithmically. we want techniques to be scalable. We do have a team looking to take manual actions, and that’s reported in GWT that will help you take action to come back. The severity of the problem is considered and will affect the length of time of penalty. You can do a reconsideration request at any time and as long as you meet the bar you’re immediately reinstituted in results.

Danny asks for confirmation that with algo penalties, those aren’t lifted until new rollouts and Matt confirms. Danny asks why don’t you tell us if we’re effected by Panda? Matt says that would allow for gaming the system by webmasters reverse engineering what signals are involved in the penalty (by selectively removing spam tactics until penalty lifted).

Danny: I’ve explained that SEs have regular spam detection techniques going on all the time but every so often they do a deep clean of the index to catch the stuff the regular spam stuff isn’t getting. Matt agrees with day-to-day cleaning vs. really scrubbing.

There’s a bit of discussion around downloading webmaster data every 3 months using a python script (Google’s current recommended method of saving that data) and Danny’s argument that Google should make that a built in option in the tools. Matt says that will require more computing power.

Local Carousel: We can’t tell you how we rank and place businesses in there because there will be spamming.

Matt’s priorities for search marketing: The goal should not be to show up highly in Google to make a lot of money. A lot of link building is putting the cart before the horse. Ask how to make something make compelling or excellent. Ideas for “great content”:

Earlier today you tweeted that author authority comes into play in some ways such as in-depth articles. Matt confirms that authorship signals come into play in at least this one way, yes. Longterm, things like social and authorship, knowing who wrote what and who should be more trusted in the search engines will figure more and more in search.

Regarding conversation: There’s content that lives on the page then there’s content on social media and blogs (she calls it external) — how does the value of that conversation change with Hummingbird, especially now vs. 10 months ago.

Matt: Hummingbird is about the words on the page and even moreso, the query. Weights of words correctly for long queries. In theory that could be applied to social conversations but that’s not what they’re doing right now.

Negative SEO: Matt says that he wouldn’t worry about it. In a small umber of circumstances people who think they’ve got negative SEO against them doesn’t know the full picture (like something being directed by another arm of the organization). They work hard to make sure their algorithms are safe against negative SEO.

Disavow even if you think you’re not penalized?
Matt: Yes, proactively. Remember to disavow at the domain level.

Show all links in GWT?
Matt: That’s a lot of machines and we have no plans to do that and we give 100k links sorted in a representative way.