First day, first session. The Domain Names and Trademark Issues panel at Pubcon was so much fun that I decided to cover another legal issues session here at SMX Clearly, I’m not right in the head. Moderator Jeffery Rohrs will be heading up a panel featuring speakers Clark Walton, Walton Law Firm; Sarah Bird, SEOMoz; and Eric Goldman, Santa Clara University School of Law. Rob Kerry is the Q&A moderator.

Lisa and I have new computers for this conference. They’re much lighter (yay!) but the shape of the keyboard is a little different. Any typos are entirely due to unfamiliarity with this keyboard, I swear. Also the glare from the fluorescent lights. And the phase of the moon. What I’m saying is that it’s not my fault.

Jeff Rohrs starts off with some housekeeping. The Q&A will be done via a Web address in addition to traditional questions

Clarke Walton is up first. Hey, he was at Pubcon. He used to work for Submit Express before he became a lawyer. A lawyer and a spammer he says. He used to only put a few words on his powerpoint slides, now he puts a lot.

SE trademark policy– Microsoft revised their trademark policy in 2007. They used to white list advertisers but they found themselves caught in the middle too often so they axed the white listing policy. You can’t use someone else’s trademark without

Trademark policies in the US:
Google: Anyone can bid on a trademark but they can’t use it in the actual ad copy.
Microsoft: You can’t bid on or use in copy other trademarks. Unless you’re an official reseller or an information site without affiliate links or if you’re defining it in a dictionary sense.
Yahoo’s is very similar to Microsoft’s.

Outside of the USA, you can’t bid on trademarks in Google.

Utah trademark legislation–Utah created a trademark registry. Trademark owners would pay to protect their trademarks in Utah. The search engines didn’t like this at all. Also there were legal issues with interfering with commerce in other states. The law is being severely defanged as we speak. Utah SB-151 is the relevant law if you’d like to look it up.

Langdon v Google. Langdon, Clark says, is a griper. He was writing ads that were very critical and google wasn’t publishing them. He claimed his free speech was being violated. The courts disagreed.

American Airlines v Google: August 2007 — Suing Google about Google’s selling of its trademarks as trigger words and in ad copy. They claim that Google’s policy is too burdensome on the trademark owners. This case is interesting basically because American has deep pockets and could really fight this to the bitter end if they want to.

Copyright filing online. They’re looking for beta testers if anyone wants to try it out and you get a discount. Clark urges you to try it out if you think your content if valuable.

Jeff asks a question: Who had the ear of the government in Utah that got this law written in the first place?

Clarke says that Overstock was linked but denied it. Eric jumps in to note that this is really interesting because when the public noticed, the whole government started fingerpointing at everyone else. Unspam is a government contractor, they have a program called Don’t Spam The Kids. Matthew Prince, the CEO of Unspam says he came up with idea basically and called over to the state legislature. They don’t know who got into it after that.

Jeff’s running a search on Netsuite. Netsuite’s trademark is being used in every paid at but one. Google only stops you from using it if the trademark owner complains. 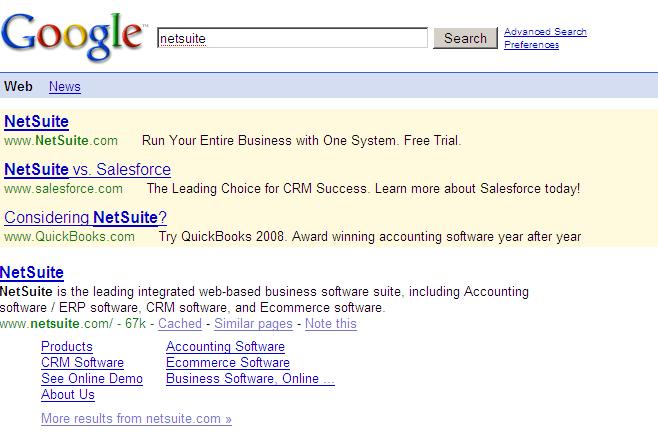 Sarah Bird is going to jump right into the Communications Decency Act. She’s going to break it apart for us into nice bit sized chunks. Thank you, Sarah!

Back in the olden times, pre-Internet when there were those dead tree medias, it was the publishers who were held responsible for defamation. Distributers (like libraries) didn’t have the same risk. Then along came the internet. Trying to determine if the service providers were publishers led to Prodigy being sued for something written on their boards. They were held liable because they tried to do some editing of content. This created a disincentive for online publishers to edit the content posted. That led to a lot of trash, so along came the Decency Act.

The idea was to both encourage publication and to keep things from being too defamatory. It means that you’re not going to be liable for what someone else says. The law says that it’s only the “Information Content Provider”, that is, the author, who can be held liable, not the publisher. If you can find the author (a big if), you can sue him or her.

The act is very broadly written which is good for interpretation but bad because it invites a lot of lawsuits trying to determine what is protected and what isn’t.

The law does not say that you can’t be held responsible for intellectual property issues, criminal issues, privacy issues, etc.

“Interactive Computer Service” is the language used for a publisher: Google, Craigslist, the comments at SEOMoz.

This only applies to online content. The New York Times is still responsible for what they publish in the print version.

A typical case: A doctor sues a Web site for a bad review that was posted there. He’s going to lose because they’re not responsible for the content, the author of the review is.

2007 newsflash: Fair Housing Council sues Roommates.com for allowing the publication of discriminatory and offensive ads (using dropdown menus for customization.) Should Roommates.com be held liable for violating the Fair Housing Act? Roommates.com didn’t intend to be offensive. However if they were a print paper, they’d be responsible. They were trying to create a usable database by limiting options but does that make them the author?

Two of three judges decided that roommates.com was liable for the content because they had enough control over the content that they were the Information Content Provider, not just the Interactive Computer Service. However, in Oct 2007, the Ninth Circuit decided to recall the decision and review it. In the meantime, the law is unchanged and roommate.com is not liable at the moment.

Why do all these lawyers have so many WORDS on their power point slides?

Eric Goldman is up next. He doesn’t have a Powerpoint at all. He’s my new best friend. He points out that it’s a beautiful day and that that is typical of the area. He used to work for eopinions.com before he became a full time professor. He blogs on legal issues at blog.ericgoldman.org. Clarke and Sarah jump in to say that Eric is absolutely the authority here. It’s cute lawyerly fanboy/girling.

Eric’s topic is click fraud but he says he wasn’t that interested in it. It’s not really a matter of law, really more a matter of contract and so it’s not that exciting. It’s 1st year contract law. He says that since 2006 with the settlements by Google and Yahoo, it’s even less interesting. Google and Yahoo got a pretty sweet deal back then, he says. The real benefit went to the attorneys who got cold hard cash from it. The advertisers didn’t really get much out of it.

In the case of the Google settlement about 550 advertisers opted out, so there are continuing claims out there but Eric says it’s basically chicken scratch.

What don’t we know about click fraud? He says there are really just two open questions that we really don’t’ have answers to.

Just how bad is click fraud? There are a lot of numbers out there but it’s impossible to tell how accurate they are. He thinks that click fraud hasn’t been a significant drain on the marketplace. There’s still a lot of money being poured into the market and it doesn’t seem to drag too much on it. Have people moved on from the click fraud issue? People tend to adjust their campaigns to make up for whatever their

Will there be a new class action lawsuit? Since 2006, there are new advertisers coming in experiencing presumably the same troubles. If he were a plaintiff side lawyer, looking at

Eric says the Utah act will die and never come into effect the way it was draw up on the books. There are still two anti-keyword advertising acts on the books. Both Utah and Alaska have anti-adware laws.

He’s watching the American Airlines case carefully. Not just because of their deep pockets but also because they’re a big brand and people will know and respect. It’s a clash of Titans.

He’s also watching a case called rescuecom. They sued and were dismissed because of a technically. They’re appealing in the 2nd circuit. It’s possible that they’ll do something wacky and anarchy will ensue.

Is there a chance that search engines are going to become Internet Content Providers?

Eric: No, that would be what USC230C1 (the section of the law that Sarah was talking about) would cover.

Sarah: Yes, they can and it’s a safe move.

Eric: Clarke’s advice is conservative. It’s not bad, but it’s conservative. Before USC230, it was binary, not you have a choice over what comments you want to delete.

Jeff: If this law hadn’t been published, blogging and social media wouldn’t have taken off this week.

Clarke: Once the ISP is put on notice that there is defamatory content on their service, are they required to remove it?

Eric: I have strong opinions on this. There is no duty by service providers to remove defamatory content.

[Herein ensues some discussion on whether or not there’s any responsibility there. It sounds like there’s a difference here about moral versus legal responsibility as well as credibility issues.]

Can you click on your competitor’s ads? Are you liable?

Eric: The law is murky.

Eric: Leave the search engines alone. What a waste of money. [I sort of love Eric.] Lawyers are going to take money from you. They spent four years, lost trademarks, had to pay Google’s legal fees and got nothing more than Google following their own policy. Don’t sue Google’s; it’s a suckers bet. If you’re set on it, please hire me because I’d love to take your money.

Still on the hunt for actionable tips and insights? Each of these recent Paid Search/Online Ads posts is better than the last!
Bruce Clay on October 29, 2020

6 Questions to Ask Your Next PPC Agency
Bruce Clay on October 27, 2020

What Are PPC Services and Why Do You Need Them?
Bruce Clay on August 17, 2020

One Reply to “Legally Speaking: Recent Legal News about Search”