The hour to follow will probably be the highlight of the conference. The SES San Francisco audience have been treated to a surprise Q&A keynote from Google’s Matt Cutts. Despite it not being on the conference schedule it’s a large, packed house.

Search and Google evolve. Go to g.co to sign up for a limited test of Gmail in search results. Results from your Gmail will be collapsed so someone looking over your shoulder won’t be able to see the email. They’ve been testing it in-house for a while now – that’s Matt’s response to Mike’s comment that it’s a little scary.

Danny Sullivan joins Mike and Matt on the stage. Mike calls it an historic moment since it’s the first time, and probably the last time these old timers of search will be together. Brett Tabke, founder of PubCon gets pulled up to the stage and now there’s a million combined years of search experience on the stage. It’s PubCon, SES, SMX and Google together on one 5’x10′ stage. Major props to SES for crossing the conference divide to deliver the very best of the search world in one unprecedented presentation. 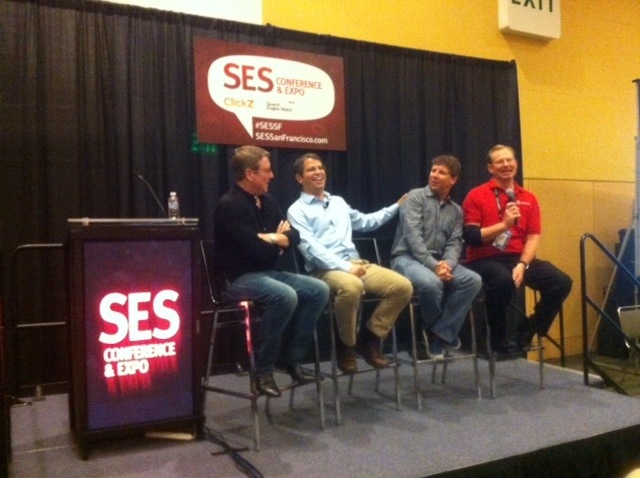 It’s open questions from the audience time; Mike says if they don’t get questions now, they never will.

Q: Will you get rid of links as a ranking signal altogether?

Matt: Long-term they want to get as close to ideal rankings as they can. In the 10 year time frame he could see them using social signals more as a signal for high quality. In the short term, he doesn’t see them leaving links behind as a ranking factor. Penguin is still in an early stage; the initial launch and a little more has happened but they’re still iterating and expect the updates to be more jarring for a while. Meanwhile Panda is cruising with regular updates.

Mike: Social as a ranking signal?

Matt: We need access to it. Facebook is blocked from us. Twitter we lost the firehouse and then Twitter blocked us from crawling for several weeks. We can’t use what we can’t see. In the short-term its probably a smaller signal than people want. In the long-term we’re working toward more social.

Twitter is a cool, private nightclub. They can turn off Guy Adams’s account when he does something like tweet out a private email. In that sense Google can be competed with – we’re both crawling the same open web.

We announced last week we crawl 20 billion pages a day. And we have a good idea of the social shares (via button counts) on pages. Klout recently redid their scoring and one was if you have a Wikipedia page – we try to look at ways to see if something is important in the real world.

Brett: Your battle against spam?

Matt: Any system that attracts a decent amount of traffic, people will try to spam it. We’ve had a big effort to improve transparency, we’re a little more confident; we show messages out to anyone we catch for actions that are spammy except pure black hat. They started showing messages to those with hidden text. It was only a few and people were very responsive. Since the reaction was good they started delivering more messages, and now they show them all and webmasters appreciate it.

Good keyword selection, helping clients, improving site speed: these are all good SEO practices. He says he was too quick to warn against “over-SEO” because people overreacted in worry. Google doesn’t hate SEO.

Knowledge Graph [Tom Cruise] result shows his net worth, info about Katie Holmes and before KG the sources were spread out. This is a move from search engine to publisher. Wikipedia’s traffic, according to Alexa and Quantcast is the lowest in years. Google is eating up Wikipedia traffic, Hotels.com and Orbitz.com are losing traffic now that you can compare prices in Google. How many businesses that saw Google as the Internet’s governor, giving rankings, are now concerned that Google is looking to takeover their vertical next.

Matt: It gets back to Google’s mission for getting knowledge out. There are sites that are happy about Google’s knowledge delivery, but not fly-by-night no value add affiliates. What value are you adding to the Web? Original reviews, opinions and analysis. It’s not Google’s place to offer opinions. Look at the spectrum of value add and the more value you add, the less you have to worry about.

Danny: Who gets the majority of their traffic from Google? Everyone. Where’s the line? There’s tension there for businesses worried about losing to Google.

Matt acknowledges the tension but says if they sit still and can’t answer questions, people will think they’re bad and stop using them. If there is some company out there that releases a voice activated answering service, I dunno, call it Siri… The audience laughs :P

There are advocates within Google, and he’s one of them, who are looking at how the webmasters enter the equation. They realize the web is websites who have owners and wembasters. It has to be a good ecosystem for everyone.

Brett: Have you thought about a statement that Google owes to webmasters and we to you?

Matt: We’ve thought about it. There’s the 10 things they do. Turns out some of those are outdated as Google is now more an information company; instead of search, they’re Android and…

Bedrock tenants are people should know when there’s payment involved and you shouldn’t be able to buy search rankings.

Jonah Stein: Domain clustering and a lot of results from the same domain has increased in his observation. We’ve also seen an increase in Google properties in results. It’d be interesting to see a distribution of the results. Give peace of mind to the little guy.

Matt: Clicks are a good proxy for rankings, and if you scrape (we don’t advocate but you could) you could see an indicator of the distribution of results. Last time we looked Bing showed more Wikipedia than Google. Seeing this would probably puncture some myths. We have been giving more stats. We’ve seen more than 30 million URLs. We have over 1 billion searches a month. Google is moving more toward transparency; that’s good feedback I’ll pass on.

Mike: There’s a myth that Google sees everything on the web.

Matt: It’s a sampling. It’s hard to decide things like authorship; we can approximate based on who seems to publish original content more often and those who duplicate content. A site in Russia analyzed how often Google delivers the original content. It shows that lately Google has gotten a lot better.

Matt: I wouldn’t put a lot of weight necessarily on +1s quite yet. We’re not promoting or pushing +1s, we’re being real to the feed back. It might be the case in 10 years but it’s too early for me to say to you that it’s a ranking signal.

Matt: The team wants to be the Switzerland of the Internet, an agnostic group that returns results with no bias to Google properties or paying customers or anything else.

Q: Underlying technologies of Knowledge Graph and your vision of structured content as an SEO technique.

Matt: The primary part we’re building KG off is Freebase. They acquired the company but it remains open source. You can parse and view the info. But if there’s a problem you can report it. They fix it and also send it through a feed to Wikipedia and the other sources. Do a little research into Freebase for more info.

Matt: PageRank was gamed is the first answer. But to the second part of the question, they’re moving toward that. They’re delivering messages to webmasters of ways they’re shooting themselves in the foot. They recently started sending out new messages; there are some links to your site we might not trust. It’s more transparency on one hand but may be not as actionable. They’re going to keep turning up the knob on transparency but there may be fits and starts as people know what to tackle from the message. Examples of actual things, sorting links by dates… it doesn’t do anyone good if they can’t point to things that can be acted on.

Q: After Penguin and Panda it seems like a lot of extreme panic and the environment has shifted.

Matt: They try to have incremental changes, more than 500 a year. Sometimes things have drifted far enough off course that to take action is going to be a big change. Content farms was too big to overlook and the change was big. Link networks were out of control. The links didn’t count and then to stop the link networks from taking advantage of newbies and blatantly advertising the tactic they had to give a negative effect to the links. Build a site that stands the test of time.