Search Marketing > SEO > Making the Most of Viral Moments

Making the Most of Viral Moments

“You are so dumb. You are really dumb. For real.”

Some of you might be sick of hearing about the viral video “Bed Intruder Song,” but the other day I happened to stumble upon Antoine Dodson’s YouTube channel and realized: This guy is kicking butt on capitalizing on his newfound 15 minutes.

It made me stop to think about the potential power of viral videos. YouTube has done its fair share of catapulting people into the limelight. And while I think the formula for staying power is talent, drive and business savvy, there’s a huge potential to monetize your 15 minutes and take it from the Web into other platforms. Let’s take a look at some of the things Antoine did to expand upon his newfound fame.

If you don’t already know who Dodson is, he became a viral sensation within a matter of weeks last summer when he was filmed by a local news station in Hunstville, Ala., speaking out the attempted rape of his sister by an intruder.

Dodson was criticized for a great many things but the fact is: there was something unique about his personality that interested people. Couple that with an auto-tune spoof of his TV appearance and voila! Viral magic.

The Gregory Brothers, who already had a history of creating auto-tune songs and spoofs of newscasts and personalities on YouTube, took interest in the Dodson video that was gaining speed and struck gold when they transformed it into the Bed Intruder song.

According to one interview, Antoine received a flood of call the weeks following the success of the video from agents wanting to represent him. These agents helped Dodson expand his Internet presence to promote Dodson’s microcelebrity status into something more.

After watching several Dodson interviews, I think he’s a genuine guy. So when he says that he wants to generate awareness about the sexual attacks that happen every day in the lower income neighborhoods like the one he was living in, I believe him. But … it’s also a great move on his part, because that message gives him added purpose and might just translate into added staying power.

And, just the fact that he has been able to harness the power of the viral phenomenon and monetize it is a story within itself – and an added angle that is making people continue to be interested in him. With the money he has made since all of this happened, he cites he was able to move he and his family into a better neighborhood. Dodson says he also wishes to pledge a percentage proceeds to research for juvenile diabetes, something that has plagued members of his family.

Other life purposes, according to Dodson, may include promoting his career as a hair stylist and/or performing artist. I’m guessing whichever comes first.

Dodson’s channel went up at the height of the Bed Intruder Song frenzy and in the past three months, he has uploaded 35 videos consisting of really simple concepts: showcasing media interviews, hosting question-and-answer sessions, pushing his merchandise (yes, I said merchandise – we’ll talk about that later) and more.

His channel has some pretty impressive numbers, he links out to all his other outlets online and he’s got a steady stream of supporters coming to comment:

Figuring out the Moneymakers

Dodson is doing everything from selling merchandise, which included a 2010 Halloween costume of himself, to partnering with The Gregory Brothers for profits from the Bed Intruder Song, which actually made the Billboard Hot 100 – the popularity chart for singles in the music biz – and has sold more than 100,000 copies on iTunes. 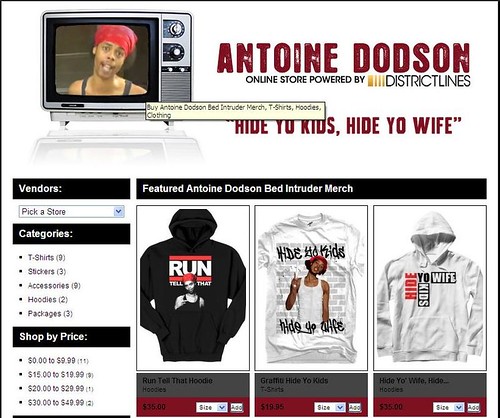 He’s also capitalizing on the media blitz: booking interviews, taking jobs as talent, holding autograph signings – he was even asked to perform the Bed Intruder Song with The Gregory Brothers at the BET Awards in October:

Not only is Dodson’s YouTube channel a hit, but his Facebook page and Twitter account both have a huge following, with more than 200,000 fans on Facebook and more than 13,000 followers on Twitter. And Dodson’s simple WordPress site (which he assures us is getting a whole new look, coming soon) already has advertisers on it. 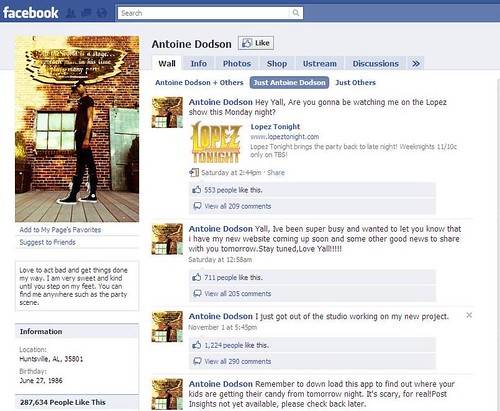 So, what’s the lesson? 1) It’s now easier than ever before to become famous and 2) With the right tools, a little imagination and a ton of ambition, you can harness the power of your viral video to monetize its momentum and perhaps stretch that 15 minutes of fame into something bigger.

What are your thoughts?