Googler Gary Illyes sits, cool and collected, on the SMX Advanced stage. Across from him is Search Engine Land Editor Danny Sullivan. Sullivan is about to ask Illyes anything and everything digital marketers have been dying to know in this “Ask Me Anything” session. 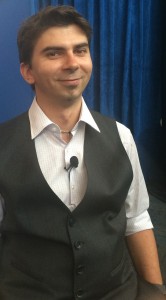 In the weeks prior to SMX, SEOs have been sending in their questions. Sullivan will ask Illyes those questions and anything else he sees fit to quiz the Google Webmaster Trends Analyst on.

It seems like every SMX attendee is in the standing-room only audience. Read on to find out everything Illyes had to say, including his insights on:

Danny Sullivan: What’s it like being the new Matt Cutts?

Gary Illyes: There’s no new Matt Cutts. There’s a team taking on his role. For example, someone is leading the web spam team and I’ve taken on the PR role.

DS: What’s the deal with Panda and Penguin?

GI: Panda – there will be an update/data refresh in 2-4 weeks probably. Our goal is to refresh Panda more often.

Penguin – that’s a hard one. We are working on making Penguin update continuously and not have big updates, but that reality is months away.

Will there be a way in the future to tell if major automatic penalties or actions have been levied against your site?

GI: What we are working on is trying to be more transparent about what we are launching. We want to something similar to what we did the mobile-friendly update – or, as you prefer, ‘Mobilegeddon.’ We would probably handpick a few launches that would be very visible and talk more about those. We are looking into how we could make an algorithm that would show webmasters when they have hacked content, for example. (That’s somewhere we might be transparent, for example). We also have a few other launches that I’d consider good candidates for being more transparent.

DS: Last month, we had the Quality Update. How is Google assessing the quality? How do clicks factor in?

GI: We use clicks in different ways. The main things that we use clicks for evaluation and experimentation. There are many, many people who are trying to induce noise in clicks. Rand Fishkin, for example is experimenting with clicks. Using clicks directly in ranking would be a mistake. In personalized results, if you search for apple, we would most likely serve you a disambiguation box. We have to figure out if you mean the company or the food. Then, we’d look at the click you made.

DS: How is the Mobile-Friendly Update going?

GI: I think there were two things – first, we weren’t clear enough on what “impact” meant for us. I said at one point the impact would be bigger than panda and Penguin combined. The number of affected URLs was much greater. The number of search queries affected was much greater. The other thing was that sites actually did switch right before 4/21 to mobile-friendly and that was great. That worked pretty good.

DS: What’s going on with app indexing? Do we all need an app?

GI: Sometimes it makes sense to have an app, but it’s not for everyone. If you’re an informational site, you probably don’t need one. But if you’re a car dealer, you probably want one.

Will direct answers eat all the other results? Is SEO dead?

GI: SEO is definitely not dead and SEO is good for the users, except for when people try to game the system.

When someone is a featured snippet, what kind of traffic does that send?

GI: Eric Enge talked about this at SMX West and really nailed it. It can be extremely helpful for a site to have feature snippets. It can send traffic to your site and it can boost brand reputation.

Does being in a featured snippet mean your site is more trusted by Google?

GI: No. It means you provided a direct answer.

DS: How strong a signal are brand entities vs. links?

DS: Will you be using data from Twitter as search signals?

GI: To the best of my knowledge, we are not using anything like that. We are in the very early stages of Twitter integration.

GI: It’s not that AJAX is going away and we won’t support that – since we are rendering the content anyway, we just want to save you from doing that. We can interpret the content on our end without any help from the webmaster. You don’t have to do anything special.

DS: How important is URL structure for today’s ranking?

GI: The length definitely doesn’t matter. The structure matters for discovery, not ranking. If something is far away from the homepage it signals that you consider that as less important.

DS: How is that the reported number sitemap links can decrease day over day?

GI: Sometimes we have to get rid of things that people will never search for from our index (because of storage issues).

Still on the hunt for actionable tips and insights? Each of these recent SEO posts is better than the last!
Bruce Clay on February 25, 2021

How Fast Should My Webpage Be and Why Should I Care?
Bruce Clay on February 20, 2021

What Is a Google Penalty and How Do I Avoid It?

Thanks for all these information.
Focus on user search keywors, That has always been to growth your SEO.

Gotta love the directness with which he replies to the question about a link between trustworthiness and getting a featured snippet: “No. It means you provided a direct answer.” I appreciate his candor, and this is some good info. Excellent work, as always, Kristi.

Thanks for gathering all these information, Kristi. Much appreciated! Based on his answers, Google is just telling us to prioritize customer experience. Focus on people – not search engines. That has always been the goal, and for the most part, if we put all our efforts into it, we can’t go wrong. After all, it’s humans who use AND operate search engines.

Thanks for the coverage Kristi! Keeps us folks in India informed on the latest in Mountain View, Simi Valley and Silicon Valley!