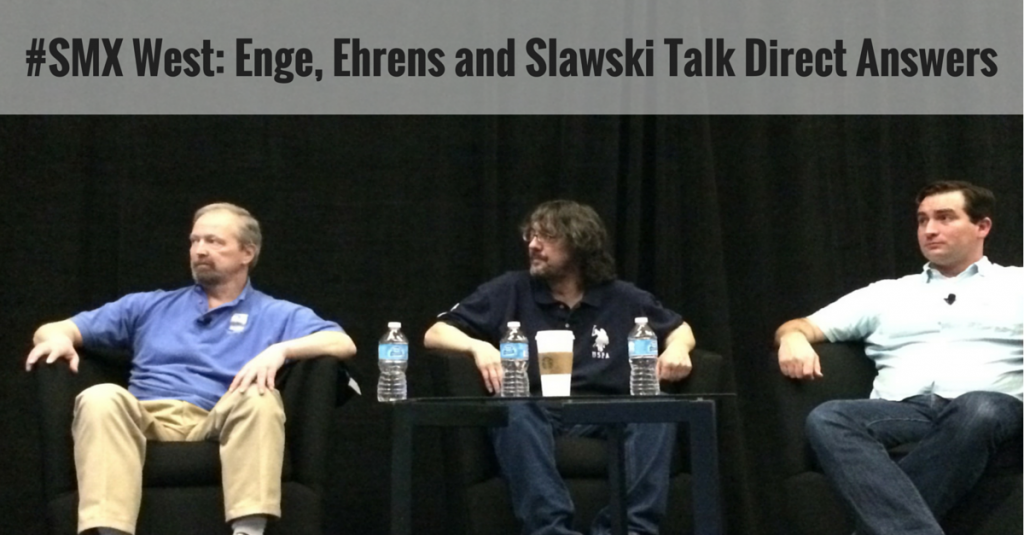 Stone Temple Consulting conducted a study of 855,000 different search queries to see how many would generate a direct answer in search. All of the queries had some chance of generating a direct answer. How were the questions formulated?

Those latter 355,000 were based on historical events, television shows, famous people, books, restaurants, movies, fruits and vegetables – anything with a chance to generate a direct answer. For each one, Stone Temple Consulting fashioned questions around them — for example what would you want to know about the Eiffel tower? Who built it? When was it built?

How, then, do Internet marketers proceed? Enge recommends not trying to make a living on public domain info. (Click to Tweet) Google will be displaying pubic domain info more and more in direct answers. Google may also license info — if it’s easily licensable by Google, it’s risky for you to count on this as a source of traffic.

Slawski had mononucleosis in the sixth grade — he notes that we would have really appreciated having Google direct answers at that time to answer his questions about the illness!

He quotes Google: “Now we are increasingly able to provide direct answers — even if you’re speaking your question using voice search — which makes it quicker, easier and more natural to find what you’re looking for.”

He quotes Eric Schmidt: “In each case we’re trying to get you direct answers to your queries because it’s quicker and less hassle than the ten blue links Google used to show. This is especially important on mobile where screens are smaller and typing is harder.”

Slawski points out that Google Israel filed a patent aimed at “finding direct answers to natural language questions in November 2014.”

Ehren Reilly: How Content Sites Can Win with Direct Answers

Reilly says that if you think back to the last big thing that Google did, it was Panda. And when Panda comes up, people talk about it as a thin content issue. But Reilly contends that Panda is actually about quality. Content, he argues, can be high-quality but bite-sized. Ask a simple question, get a simple answer, success! But now … direct answers will snatch up those bite-sized bits. For example …

Google decided it was unnecessary to send people off to publisher sites for queries such as these. Google will take care of it it in a direct answer.

Direct answers are reshaping what kinds of businesses are viable. Anything that has an easy answer is not a viable business. (Click to Tweet)

Types of sites that are threatened by direct answers:

Is this a threat to a high-quality site? Yes. Google provides “spoiler alerts” — snippets of your best content — displayed right in the SERP.

We found that the article had a simple answer that had the answer for the query (Facebook software engineer salary” – Glassdoor didn’t have the natural language on its page that would warrant a direct answer.

So, they put the sentence on the page and now show up in the direct answer rather than the article.