Search Engine Land Founding Editor Danny Sullivan fields questions from the Search Marketing Expo (SMX) East 2014 audience in the final session of the day. Find out what he had to say about authorship, markup, local SEO, how to teach SEO in college, and much more. 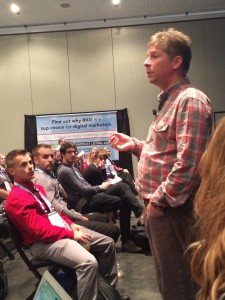 Audience: There have been a lot of changes with Google Authorship … is investing in being a subject matter expert still important?

Sullivan: The authorship stuff was a really dramatic pull back and I don’t really know which way it’s going to go … if you’ve invest the time to do it, I wouldn’t say you need to take it all back. Goo gle has said that, in its own little brain, Google might still be trying to figure out who the authorities are. I think they are still trying to figure out if authors are authorities and while they may not being using the meta data to do it, they might be doing it in other ways, such as bylines.

They went into it in a really big way, and I don’t think anyone should feel foolish for going after Google authorship. It really seemed like an alley worth going down.

Earlier this year Google said an HTTPS site has a little bit of a ranking boost.

What are your opinions on marking up HTML with structured data to show up in the search results vs. creating really robust entries in directories?

SEO isn’t just “I rank for certain keywords on Google.” SEO means you figure out how people are searching and figure out the best way to show up in front of them without money. Local search, then, is an SEO activity. You should always look for where your users are searching – if you’re a restaurant, Yelp might be of more value to you than Google, for example.

Look for local directories that are major enough to find an audience there.

Structured data seems like a good opportunity but it seems 1% of sites use it – and now dynamic links render automatically, is it worth it to implement schema?

A week ago, they announced they’ll structure the snippets even if you didn’t do any of the stuff! My advice there would be you could sit back. You don’t have to go rushing into the structured data space if you don’t want to.

Having structured data, though, like Open Graph, is a no brainer – it’s very simple with plug-ins.

What’s your advice for professors around the world when it comes to teaching SEO? It’s a challenge because it’s always changing. Should SEO be taught at the graduate level?

We have a periodic table of SEO, and that was a labor of love for me in thinking about how do you take all these factors and have a chart that you don’t have to update every month – they’re general principles. For web-wide searches, a lot of things stay the same. Like, in general, your content needs to be accessible to a search engine. Go after the general principles (if you’re writing a textbook). When teaching someone how to do well with search, you go about it from a human standpoint – why do I have this infographic? Why I am embedding this? Whatever the question, it’s about creating something that people will naturally link to.

Do you know where Matt Cutts is?

He’s on leave. I don’t know – I’m not stalking him. (Chuckles from the audience). I think he’s actually on vacation. It’s been interesting to watch what Google has been doing without him there and seeing who’s emerging and fielding questions.

If you have a page with canonical and you add a no-index/no-follow, are you sending mixed signals?

You’re probably over-thinking it and shouldn’t use it all. Without knowing more, I would probably go with a canonical tag and not worry about the other stuff.

If you’re Google, what are you thinking about these days?

If I were Google I’d be absolutely paranoid that my link signals were getting polluted. I like social signals – I think in social it’s easier to figure out who to trust (not that it, too, can’t be manipulated). The social signal is one that they should harness and they had been trying to harness. Maybe at some point they will harness it.

I think Google is focusing on showing fewer links and more answers … which is better for mobile users. But Google doesn’t know anything – it’s not smart. It’s just very good at copying. Every fact that Google knows it got from copying someone else. In the past we tolerated that amount of copying because we got traffic. And I think that’s still the case, but the scales are starting to tip.

Right To Be Forgotten – what do you think about it? Will it ever come to the U.S.?

I think it’s been a crap storm all around. I can agree with some parts of it, but I wish they had very specific guidelines all around.

Where should we be looking besides Google?

The reason we talk so much about Google is because they are so dominant. If I were local I would look at local search sites like Yelp. If I were a retailer I would pay attention to Amazon. There’s definitely a rise in traffic from social. There are alternatives, and it’s worthwhile to explore them.