Recently I have seen a lot of posts about how ‘big’ twitter is getting (I was a pretty early adopter due to the [SEO](http://www.bruceclay.com.au/web_rank.htm) industry I work in). It is also interesting to see people comment on the rate of growth of Twitter all while my personal use of this network drops off rapidly.
So why the decline in my interest in Twitter?
Twitter, like an extra strong cup of coffee, gives you a massive buzz up front, but leaves you feeling distracted and short tempered for the rest of the day. The buzz I used to get from Twitter was like connecting to an infinitely wide network of people who related and enjoyed the same type of media consumption that I did. One of Twitter’s initial appeals for me was the fact that I could connect with fellow search junkies and social media mavens any time via my browser, iPhone, tweetdeck etc. Logging on and having the news as filtered by my twitter stream, rather than a Sydney Morning Herald editor was refreshing and relevant.
So why is twitter doomed to be J.A.S.N (just another social network)?
Just like Facebook, people will bastardise anything once it reaches a certain size. Twitter is going through its ‘facebook app’ equivalent stage, you know that period when everyone wanted to play you in poker, dungeons and dragons or any other of the myriad of annoying time wasting games available to the avid procrastinator. [This](http://2.bp.blogspot.com/_q9gKpS_JOtk/SfaCMy9ywvI/AAAAAAAAAfA/vjhl05NS2zw/s1600-h/Twitter+_+Myer+Centre+Car+Park++The+Myer+Centre+Car+Park+B+….png) [is](http://4.bp.blogspot.com/_q9gKpS_JOtk/Sfbizp-VMiI/AAAAAAAAAfY/Rf59232CqN8/s1600-h/Picture+2.png) [the](http://1.bp.blogspot.com/_q9gKpS_JOtk/SfaKlBDgVoI/AAAAAAAAAfQ/rVKsqdVClAk/s1600-h/Twitter+_+Wotif.com++Get+excited…+to+sweeten+….png) future of twitter, more brands are starting to spam you about products and offering they hope you will find relevant.
But brands aren’t the only ones who are sabotaging the beauty of Twitter, no sir, just like the hole in the ozone layer above Australia, we are all to blame. As Twitter catches on and people follow their friends they will be introduced to an intimate level of understanding about the everyday exploits of people they would ordinarily catch up with infrequently. Is this really what we want? Face it, just because I am your mate does not mean I need to know you are “on the bus” / “eating a sandwich” / “on the loo”. I don’t want to know people! Hence my new conclusion that my real world friends are not as interesting as the industry leaders for [blogging](http://www.problogger.net/), [social media](http://www.socialmediatoday.com/), [tech news](http://mumbrella.com.au/).
Once the percentage of my twitter stream tweets turned from experts / evangelists to tweets on sandwiches, this social network becomes less vital to my morning routine. But what is the solution? It is rude to unfollow mates; imagine the scandal “didn’t you see my update on twitter, I can’t make lunch at 12!” So now, rather than being a source of interesting internet highlights, Twitter is a clogged up stream of ‘too much information’ and many social faux pas 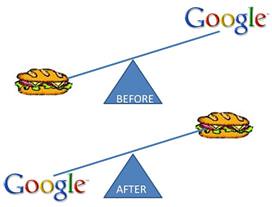 Twitter as a ticket to play
Our famous microblogging engine has (almost) become the norm and so we watch it descend from its noisy heights into one more internet website you need to monitor for your company / brand / social life.
Twitter is now a “ticket to play” in the social media sandpit; the leverage opportunities are limited and while most brands will jump on the bandwagon trying to be the first to market to leverage the ever growing traffic opportunities, most will be left cold as the wave washes on by. 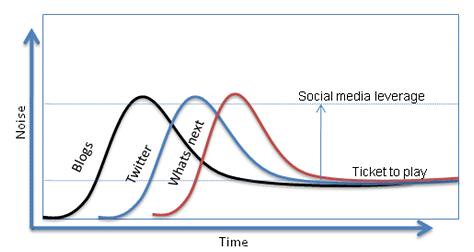 The solution is to be one step ahead, remember that while social media platforms come and go, your message, if it’s a good one, can have a lasting effect. So Twitter become just one more social media breadcrumb box to tick. Are you anticipating the next big thing your company can be preparing for?
So what is next?
The solution to my problems with Twitter is [Foursquare](http://playfoursquare.com/), a new social media network that plugs into Yelp so that you can geo-target your posts to different GPS locations. I am not saying this is going to grow massive overnight; I am making the point that this social network will help ME with my problems on Twitter. What’s going to help you with yours? Answering this problem might help you figure out where to put your social media resources next..While Foursquare is not available here in Sydney we will hopefully see its expansion soon.

Seems there are several others out there with this sort of though, like nearMe and BrightKite, among others. Not to mention, Foursquare is limited to only a few cities in the US. Not anywhere as international as Twitter or other connection media.

Twitter is great as a feed. Follow news, sports, discounts, whatever turns you on or what your competitors or other people in your industry are doing. I run a couple of accounts, each with its own focus. Instant updates and quick.
I might add I really dont care for the most who is having breakfast and who is going to lunch, unless its a bunch of mates.
So Twitter has many uses and the fact that you cannot DM someone if they dont follow you and vice versa will ensure the spam stays minimal.
So Kate, get back on the Twitter band wagon and I agree with Downsy’s first point. I still listen to lots of good 80s music, the Pet Shop boys, legends…

Kate: I’m afraid I read in your post some undertones of the “I-like-their-earlier-albums-before-they-went-commercial” syndrome.
Commercial entities latching onto and experimenting with a new technology or medium doesn’t automatically invalidate it. Nor does its adoption by the “early majority”. Should email still be something to which only those in the education and defence sectors have access, like it was in the 1980s? My 75-year-old mother is a pretty unsophisticated user of email and we all hate penis enlargement spam, but those two facts combined don’t render email useless as a business tool or a marcoms medium, as long as it is used to best advantage.
Lots of brands shouldn’t be on Twitter and they will learn this to their cost. I have written about this with what I think is appropriate scepticism (http://qbrand.blogspot.com/2009/03/why-some-brands-should-not-be-on.html). But other brands will find a way to use the “social” part of social media to converse with or otherwise engage a segment of customers.
And I can only agree with @yakboy in his comments about individuals and social networks continuing to use Twitter, aware of both its power and its limits.

I agree with @yakboy. I enjoy twitter because it’s like being in a chatroom only with people I actually like. I tune in when I need a break and let most of it fly past.
I think you’re wrong about people assuming that if you’ve said it on twitter then everyone must have read it – unless I’ve @replied or DMd someone I can’t assume that people have read what I’ve said – twitter isn’t something that you go back and read what you missed – it’s for reading what is happening right now.
Also I find it entertaining to know that my friends are on the bus or eating a sandwich (not so much when they are on the loo).

You might understand twitter more if you come to terms with the fact that “social media” is more about the “social” than the “media”.
The people who really enjoy twitter are the ones who interact with each other: reply to each other’s tweets, discuss the news of the day, play word games with hashtags and basically talk to one another.
Of course twitter isn’t very interesting for those who just use it as a broadcast medium. The idea of “micro-blogging” is nonsensical. Anyone can see that you can’t write anything of massive substance in 140 characters.
But, as any SMS-junkie knows, it’s enough to have a good chat with someone – as long as the communication is two-way. And twitter extends these two-way conversations into many-way conversations.
How can you leverage this sort of chat-room style socialising into market power? Honestly, I’m not sure you can.
Unless people already care about whatever it is you’re trying to sell, they aren’t going to listen to your tweets about that brand. And, unless you have an active and interesting presence on twitter that includes interaction outside your marketing angle, people aren’t going to listen to you at all.
Twitter’s kind of like a party, and if a door-to-door salesman shows up at the door, you’re not likely to invite him in for a cocktail.

Interesting point Kate:) I think the solution is to filter though. I am having the same problems with blogs – very often people post things I don’t want to read about and synchronizing their RSS feeds has lot of noise – it is like buying the Sunday’s newspaper and reading only the travel section; you throw away all the flyers inside anyway.
I use Yahoo Pipes to filter my RSS feeds and I also created certain groups in TweetDeck to filter content only from certain people. This works for me for now.

Hi Kate,
Some interesting perspectives Kate. :-)
I came to your post via Twitter. No-one emailed me to it and I doubt it would have gotten a mention on any of the blogs/news sites I read. Ironic.
I’m still learning about this new network myself and don’t have all the answers however I think you need to just stop following anyone who posts noise.
Twitter makes it quick and easy to post things that perhaps don’t deserve the time to write a blog post. Also, it forces brevity. (Something this comment lacks.)
– Mike

great article Kate! i see things in Twitterland changing too, but I see Twitter using that $55 million to evolve the service into something better. what do i mean by better? imagine a Twitter that had mechanisms to filter noise. search that took out the sandwich eating, the day to day, & focused in on the real things that people had to say. once (hopefully) it gets there maybe we will see a different kind of divide happening. one where people are given credit for what they know and not just for who they are.
– jason nadaf