SMX West Keynote: How to Get Critical Online Reviews in Today’s Social Economy 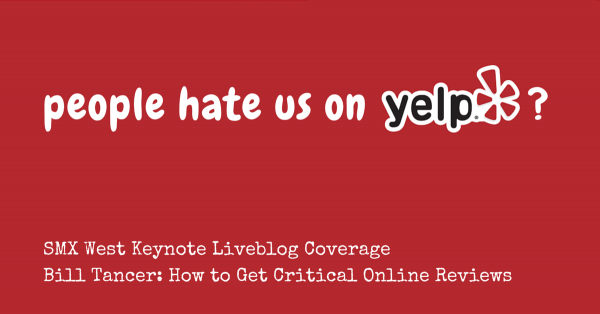 Bill Tancer, author of “Everyone’s a Critic,” is the general manager of global research at Experian Marketing Services. This makes him the world title holding data geek. On Twitter he’s @billtancer. For today’s keynote he’s going to do something different and never before presented. He’s going to share a behind-the-scenes tour of his book “Everyone’s a Critic.” The story involves an Icelandic volcanic eruption, a review that “this place sucks,” and a near heart attack at his kitchen table.

The SMX agenda describes this keynote as such:

Everyone, it seems, consults online review sites before making a purchase. But what do we really know about how those sites work, how consumers interact with them and how businesses should engage with them? Bill Tancer does. Tancer, who’s general manager of global research for Experian and a New York Times best selling author, spent over a year studying the online review scene to write his latest book, “Everyone’s A Critic.” In his talk, Tancer will open up the world of Yelp reviews, TripAdvisor posts and more. He’ll cover the funny, wacky and weird way consumers use these services to vent, complain and praise. He’ll also help attendees understand how important these venues are to their businesses and the types of strategies to use.

The restaurant Pizzeria Delfina can have an hour-plus wait. The chef won the James Beard Award. One time the chef/owner decided to read his online reviews. He came across a one-star review that “this place sucks.” He wanted to do something about it.

He created a black T-shirt for everyone on staff. On the front it had a single star. On the back it said “this place sucks.” As a result he and his restaurant were featured on national TV and radio. The chef made that single one-star review go far. How often do people think of online reviews as a tool and an opportunity?

The book was partly data driven but mostly driven by his personal experience. The story of this book goes back a year before the story at Pizzeria Delfina. At the time Tancer had written his first book and was obsessed with the reviews posted about his book on Amazon. He’d sit at his kitchen table and refresh the Amazon page. Then he got his first negative review. “An exercise in navel gazing.” “It’s written like someone with ADD.” “Bill Tancer may be the king of measuring online research but the king would do well to hire a better editor.” As a result of these reviews, Bill stopped writing for a while. To get out from under this paralysis he decided to write about reviews, the very thing that was crippling him. 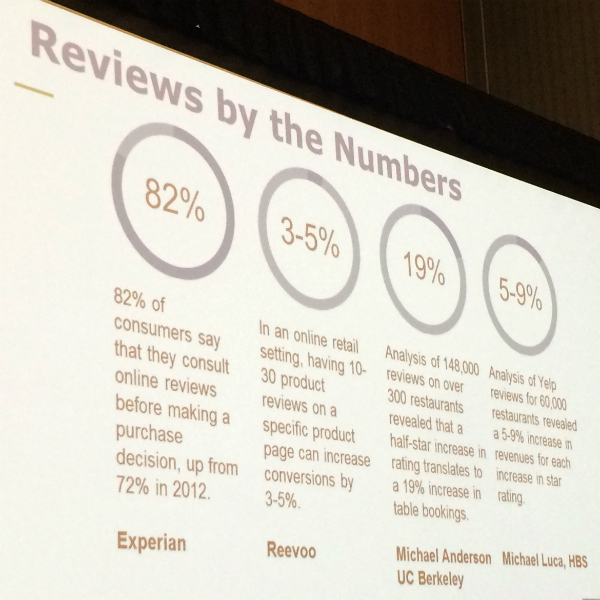 Reviews by the numbers:

When you set out to write a book you look for a gap. This data and the implications of reviews for online businesses is significant. 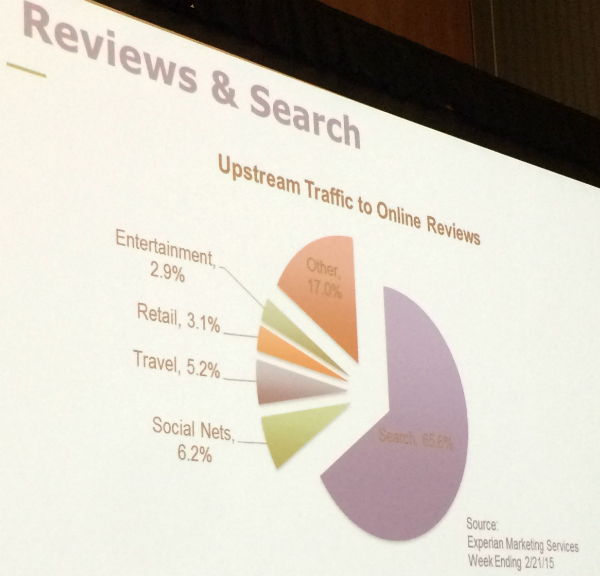 Here he grouped the data for all the reviews regardless of category. He found that 66% of all traffic going to review sites are coming from search.

What are some things we can do to change the way we practice business? In researching the book he found a few businesses doing great things to drive reviews. But first, you should know something about the bad review. No one likes to hear their baby is ugly and negative reviews can shut someone down completely from reading their reviews. But “when there are specific negative comments, the reader tends to believe the reviewer. If the complaint doesn’t highlight a deal breaker, it can translate into increased sales.” —Panagiotis Ipeirotis, NYU professor

Getting over the negative review is one of the first steps to getting reviews to work for you.

The story of the Eyjafjallajökull Icelandic volcano of 2010: Tancer had a two-day trip planned to Iceland but the volcano eruption happened while he was there, turning the two-day trip into a 10-day stay. The hotel he chose to stay at didn’t rank well but he picked it because it had five-star reviews. When he arrived at the hotel he was greeted on arrival with the same beverage he had asked for the last time he stayed there: a latte with biscotti. Because his trip was extended he went to a travel conference where he talked to hotel owners. Here’s what one said:

“I hate reviews. Before TripAdvisor I could charge a premium for my rooms just based on my brand. Now even five-star hotel rooms have been commoditized.” —CEO of a five-star hotel chain

The brand doesn’t have as much power because the service is reflected in online reviews.

The story of Jay the locksmith is a story of a 28-year-old who realized that millennials were looking at Yelp for locksmiths. When he searched Yelp for locksmiths in New York City, everyone had two stars. He decided to be the Four Seasons of locksmiths in New York. He now has 255 nearly exclusively five-star reviews. He found something little he could do that would give people a reason to review him. If you had asked Tancer if Jay’s idea to gain a business through getting online reviews for locksmith service was a good idea, he would have told you no because you can’t get people to leave reviews for a service like a locksmith. 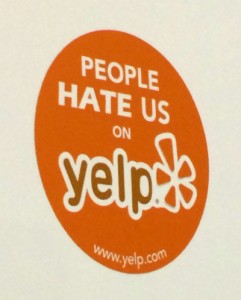 To embrace this, Matt printed a sign and posted it on his window: “People hate us on Yelp.” He parlayed this into a Facebook page where he’d post the negative reviews and invite people to comment with how he should reply. Know that not responding at all as a business (aloof service) will get you worse reviews than actively bad service. 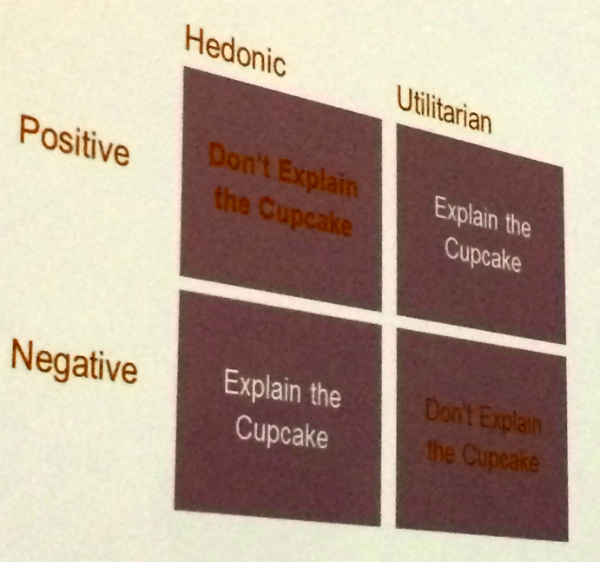 Think of how you’re reinforcing the message behind your interactions on social media and how you respond to readers.

5 Rules to Getting Reviews

The online review space is one of the most massive repositories of competitive intelligence. Find the opening and what’s not working.

The Future of Online Reviews

In search we’ve got an algorithm for authority but in reviews there’s no accounting for perspective. Someone may positively review someone for the same service behavior that someone else reviews negatively.

Question: Have you looked at incentivizing reviews?

The underside of reviews is cross-incentives and fake reviews. Go to Craigslist and you’ll find people selling reviews for $5 or $10. Elite Yelpers can extort businesses for stuff. There are incentives built into the system to game it, on both ends as a business and consumer.

Question: Regarding the time to respond, is it reasonable to respond once a week, every few weeks, or every day?

Tancer hasn’t done research on the topic of timing. He says that he tells bizes of all sizes to pay attention. He noticed a trend of reviews for a coffee shop client. Negative reviews were being posted the same time in the afternoon every day. It turned out the shop owner took afternoons off and that employees were slacking during that time. That’s info gleaned by reading reviews.

Question: It can be hard to get reviews from certain kinds of people. What do you think of that?

We found different personas of reviewers we were able to group together, and they’re covered in the book. A few are:

Want more from Bill? Grab his book but first, read our exclusive interview with Bill Tancer to get you thinking about how to build review acquisition into your business.

One Reply to “SMX West Keynote: How to Get Critical Online Reviews in Today’s Social Economy”

Excellent recap Virginia. Greatly appreciate you capturing and sharing some of what I learned so other marketers and businesses can benefit! #SMX was a fantastic event. -Bill