How’s It Going, Facebook? Feature Updates to Watch For

Facebook and me are tight. I like how Facebook’s always asking me how I’m doing. No matter what’s going on in my life, I know Facebook is happy to hear from me.

It’s pretty impressive Facebook can always make the time considering how much it’s got going on. Lately the service has been really busy adding new features to its social platform, so I wanted to take a minute to get an update from the ultimate update sharing service.

Facebook Graph Search is still in beta, and is sure to morph before it becomes the community pillar Zuckerberg suggests in the intro video for Graph Search. But if you haven’t signed up for the beta yet, don’t delay. You’ll want to be able to play inside when the doors open to you.

Before Graph Search is out of beta we can expect to see changes to address privacy concerns. And I expect some people will scrub some of the humor out of their profiles when Graph Search is open to the public — unless you like being found in the graph of “married people who like prostitutes” (see Actual Facebook Graph Searches on tumblr).

Privacy issues aside, there’s potential for good stuff in Graph Search for marketers. At Facebook’s press event last month, the company illustrated some of the feature’s uses for business, including job recruiting and, of course, advertising.

Facebook has had a good reputation among online advertisers for its ability to target user interests with never-before-seen granularity. Facebook Graph is a new way to sort and filter user data. Here are a few ways to mix and match Graph Search filters to reach new customers and find influential contacts — just a few ideas to get you started in a creative direction.

As far as Facebook updates, we can’t overlook the space the service is carving for itself in the local-mobile arena. A natural growth direction thanks to the hundreds of millions of users connecting to Facebook from mobile apps, including Apple and Android devices.

Read all about the Facebook Nearby feature and how brick-and-mortar businesses should be taking advantage of the review and ratings system to reach new customers through their friends and networks, as shared last week by my colleague in Bruce Clay Australasia.

Our final update isn’t exactly new, but I used Facebook Gifts for the first time last week and I now have a sneaking suspicion that I have to share. At the beginning of January, a game went around Facebook that looked like this: 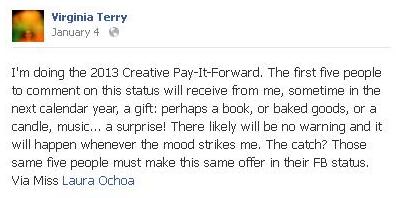 Still in the surge of the giving-season I decided to join the “2013 Creative Pay-It-Forward” game. I’m looking forward to sending surprise, for-no-good-reason gifts to a few of my favorite people. Warm fuzzies ahead!

Last Friday Facebook notified me of the birthday of a very special person, and as you may have noticed, that notification comes with the ability to “Send a gift.” A bunch of vendors have hooked up with Facebook, making it easy to send gifts for the home, tasty treats, gift cards, beauty and style products and a lot more for all sorts of occasions. As I was putting together this birthday gift it occurred to me that this makes my gifting game play so easy! Everyone I’m playing with is already on Facebook, after all, and now I don’t have to worry about getting addresses I don’t have from anyone.

Which of course makes me wonder if Facebook could have seeded this little game to get people playing with Gifts? The first reference of the game I found online was dated January 2 on GOOD.is. The first commenter said:

“im trying to track the person who originally came up with this idea on facebook. you’re one of the earliest people i can find that posted this idea. are you the one? or did you get it from someone else too?”

And there was no response. Anyone else suspicious of self-motivated origins of this supposedly selfless game? What do you think?

In the end, no, I don’t really care if Facebook planted the seed for this game in order to spark a new profit stream. But how can you not enjoy the irony in this mystery and the occasion to play conspiracy theorist? :)