On today’s SEM Synergy podcast, we spend some time looking at site performance — how long Google has factored it into rankings, how important it is for conversions and usability, and ways to improve the performance of a site.

Outside of marketing, superior performance can be seen in the world’s athletes, fine-tuned machines composed of muscle and grit. When it comes to love of sports, no game has my heart like the fiery passion and determination that takes place on ice.

Ice hockey is game played out of love. Did you know that the NHL is one of the lowest paid top-level professional leagues in the U.S., second only to Major League Soccer in the big five of sports? The big five I’m talking about are baseball, basketball, football, hockey and soccer.

Ice hockey is a game played with guts. Have you seen these black-and-blue, toothless tribes?

And ice hockey is a game played through talent. Players are endowed with the undeniable ability to turn a wooden stick and a rubber projectile into an extension of self.

Love, guts and talent sound a lot like what’s driving small business owners today. They’re good at what they do, they care about what they do, and they’ve taken a risk to do what they do. And so it’s not such a stretch to see that the lessons the NHL has had in the last 20 years are applicable to the greater business community.

Getting on the Map: A Worthy Underdog

The Miracle on Ice cemented ice hockey into the American consciousness. Russia’s Olympic team was widely regarded as the best in the world, so it was no surprise that they swept the competition to fight for a medal. However many hockey enthusiasts didn’t expect to see the cohesive and dynamic playing that got America to a medal round. Americans watching from home were on the edge of their seat in awe as the U.S. team rallied back from a 5-2 deficit to tie the game midway through the third period. The unsuspecting underdog had proven its mettle, gaining a country of loyal fans in the process.

Lesson learned: You don’t have to be the biggest game in town. If you prove your value, customer service and quality matches the competition’s, you have a foundation from which to build a loyal customer base.

Knowing Your Audience: Don’t Give Up the Fight

If you’re not a hockey fan, you may point to the bare-fisted brawls as unappealing. Over the years, even some fans have proposed taking the fight out of the game, numerous times. I’d say I’m a peaceful person, turned off by violence or resorting to physical solutions to intellectual disagreements. But fighting is part of the strategy of a physical game that relies on the psychology of intimidation and high-flying energy.

A check to the boards is often the best move when a player is speeding across the ice toward an opponent, and that kind of physical contact can understandably lead to emotionally-fueled retaliation. Fighting is simply a byproduct of the physicality of the game. Unfortunately, every time rules from on high come down to squash fighting from the game altogether, the sport loses the momentum of an otherwise growing fan base.

Lesson learned: If you provide a unique offering to the marketplace, embrace it and use it to your advantage. Be sure you know why your audience uses your product or service over the competitions’ so that you can capitalize on this differentiator. Of course, don’t hold on to your current offering so tightly that it paralyzes you from making progress….

I follow my team on Twitter, and they’ve got the channel down. Along with instant replies to fans, passing on stories of interest, updates on players, plays and scores during games, and fun features like photos of the beard of the day, the Kings’ Twitter maven gets interactive with fans at the game: 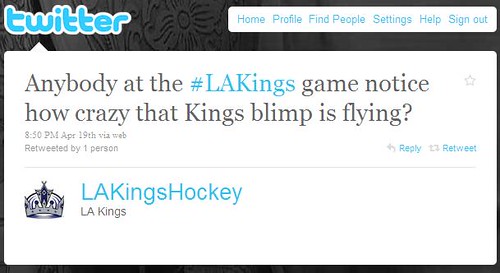 The King’s online presence is part of a larger, concerted effort by the NHL to dominate the digital space. In an interview with digiday:Daily, the NHL’s senior VP of media sales said, “A few years ago we made a strategic decision to own the digital space for hockey. We audited what other general sports sites were doing to cover hockey and we saw a better way.” They’ve capitalized on their tech-savvy demographic to pull in big-brand advertisers, and it’s these sponsorships that make it possible to develop the site into the rich-media hub it is today.

Lesson learned: Evaluate your industry’s big picture to see how you can match it and improve upon it. Interact and engage to bring in the tech-savvy crowd that’s looking for you (even if they don’t know it yet). People are living online, even when they’re out and about. Don’t forget to reach out virtually, even if they’re standing right next to you.