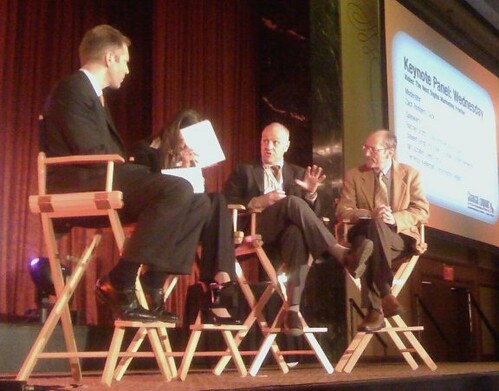 Mike explains that the industry big-brains on the panel will talk about where we are in search and where it’s likely to go. What’s happening in the tech space now and what’s likely to develop?

Henry says that in 2000 he was in the midst of a tectonic shift and Google has exploded into a huge and powerful business. He says it seems we may be on the verge of another tectonic shift caused by social media networks.

Jonathan says that in 2000, his content creation company became an expert in time — how long it takes to create and disseminate a story. This gave them a huge advantage in their industry. About nine months ago, the number of clients that call looking for content dropped to zero. They’ve had to close their freemium content model and move to lead generation.

Henry asks Jonathan what happened that they lost their business in the former model. Brad explains that SEO has changed and it’s now about community and personal networks and encountering what you want to find on the Web because a user surrounds themselves with sources that are important to them.

Brad agrees essentially, but he says that if they weren’t being affected by social platforms we wouldn’t be seeing them scramble to incorporate real-time content. And when a news story breaks now, Twitter is the first place they turn to post pictures. Google is the furthest thing from their mind.

Brad says that SEO now encompasses the social platforms. As always, you have to put content where users are and expose it in a way that people will just spread it in their personal networks. Virality is now more than just creating a funny video. Virality now is — well, no one really knows.

Erika says that she sees SEO now to mean “search everything optimization.” Less and less results are straight HTML pages, so you have to adapt to that.

Henry says he doesn’t see the commerce search utility in social. He asks Erika if that’s what she means by Google isn’t being disrupted. Erika replies that there are definitely category killers. Unless Google and Bing come up with a killer mobile marketing application, they’re not going to be the place where people tell friends about the baby they just had or to go looking for a hotel. They’re going to Facebook and Orbitz, for the previous examples.

Speaking of mobile, Henry asks when will mobile marketing that we’ve heard so much about come to existence, if ever?

Erika gives a futuristic example of the promise of mobile marketing, where your phone notices you’ve been lingering around the toothpaste aisle longer, and it knows your favorite toothpaste is Aquafresh. If you get a message that says “buy one get one Aquafresh when you mention this promo code”, that lives up to the promise. She says this would be the first time that consumers are reached during the shopping process rather than before or after as is the case today. She thinks mobile marketing should become footstep marketing.

Henry asks about what Bing’s chances are in search.

Brad says that in the publishing world, search engines aren’t considered as much as keywords are. Yes, they track referral traffic, but they get wins and losses on keywords.

Henry says that lots of people are predicting an upcoming app economy. Others are saying that mobile is just another browser and we have to make sure it renders, but don’t necessarily have to invest bi in app development.

Brad says that they’re definitely investing in apps, but it’s much more costly to do this, whereas addressing mobile rendering can be rolled out across their network. If you have to choose between developing apps and optimizing your site for mobile, go with optimizing for mobile because it’s a lower cost.

Henry asks if people should be investing in download apps?

Erika says that it takes two minutes to make your site mobile. No excuses for not doing that. As far as apps, it’s making her clients nervous that Apple has such a closed system. Still, yes, invest in apps but if you do, also invest in the marketing because people will have to find it.

Henry says that today there is Apple’s closed app platform and Google’s open and free app platform. Is it going to mimic the 90s when it was Apple vs. the more open Microsoft?

Jonathan argues that Android is going to become the dominant platform. He thinks they’ll easily scale past Apple. However, Android doesn’t offer the same ease of use but Google’s getting a pass from consumers because they’re Google.

Brad expects it to be Apple vs. Google over the next few years and sees it shaking out the same as Jonathan does.

They’ve gone on a tangent about Web TV, with Erika explaining the ability to buy the coffee table you see on your favorite sitcom. The rest of the panel groans and Brad says he doesn’t see the consumer appetite for this. Jonathan says that Web brands have become the dominant mover and shaker in their dominant niche market, but this is not a broad audience.

Most people aren’t advertising on the three major engines — just Google — they’re not segmenting ad groups, they’re not writing great ad copy. So why is there even a need to explore things like social when there’s so much money being left on the table in search?

Erika thinks marketers should pay attention to social media because of the listening factor. You don’t have the opportunity to disrespect any client because the one annoying client you deal with is going to tweet negatively. When that one annoying tweet shows up in the results, you’ll feel it.

What do you think of the social media ad model?

Brad thinks that Twitter falls most easily into the search ad model. Facebook is different and more complex.

How can we make the Web less of a slum?

Jonathan suggests consumers pay some tiny fraction of a cent for every page they visit on the Web. This would bring people to a better understanding that everything they touch online is worth something. That would cut down on the bloating of Web pages.

Brad says that users are faced with too much cheap content. He says the answer is some kind of filtering. Either a portal filters for you or you filter personally through your social networks. As a user, the tools are there to cut through the news. As a publisher you need to engage with those tools in a way that your stuff rises to the surface. Henry adds that there’s also brand filtering. Consumers buy brand.

Erika predicts “agents” on Twitter or Facebook, those with large followings, can be paid to market for businesses. Jonathan says that happens today.

If you have some really eloquent Harvard grad write incredibly beautiful content for your site, can that attract an audience?

Jonathan answers no and says that’s what has killed his content creation network. Brad says that there’s a continuum — from content mills to the new media skilled to an eloquent Harvard grad.

What advice can you give to new publishers to survive?

Brad says that any publisher that’s aware of changing conditions is thinking in terms of keywords and meeting search demand. For the freelancer or journalist, it’s always been a game of anticipating demand. They should be aware of query search engines that show what topics are in demand, because that’s what it’s about today.

One Reply to “Search Marketing: Analyze This – Keynote Panel”

Interesting the same people that said Android was DOA just over a year ago are now saying it will dominate the mobile landscape – way to read the tea leaves.