This morning’s SMX keynote is the first of its kind and all sorts of a big deal. Microsoft CEO Steve Ballmer is about to address the search marketing community for the first time at an industry event.

Danny Sullivan is going to be driving the show, and in my experience, that means no shots pulled. Plus there should be some audience Q&A at the end. A couple weeks ago, SMX co-chair Chris Sherman shared some of the behind-the-scenes planning that went into this event, and like him, I’m coming into this impressed at Microsoft’s apparent efforts toward transparency and outreach. Will we leave here illuminated or wanting more? 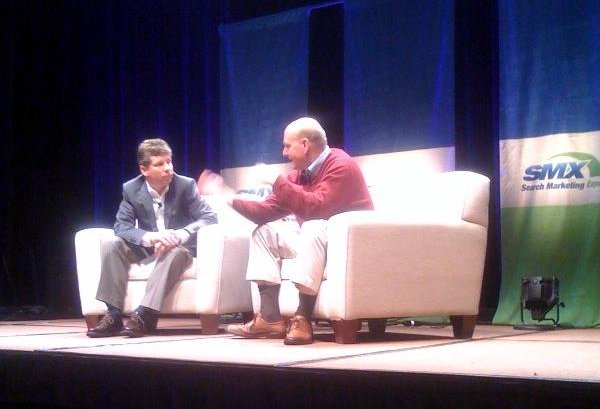 Danny: The deal with Yahoo!’s going to go ahead. How’s that going to help the people in this room?

Danny: Do you think you can make it to number one in search?

Steve: There’s no good answer for this. Say yes, you sound arrogant. Say no, you sound unconfident. So YES, eventually.

Steve: Of course not, but we’ve got great long-term optimism. We know that tomorrow’s goal is to gain a few tenths, a point.

Danny: Is Yahoo! going to survive as a search player? You want to beat them, but aren’t you going to just kill them?

Steve: No. Job one is getting people to use our searches. Yahoo! is participating in the search business. And growing overall search share is job one.

Danny: But you want to be more successful, on top of them at the end.

Steve: We want Bing to be the best product it can be. With Yahoo! we’re going to have 2 companies pushing to get that done.

Danny: Is Microsoft trying to get antitrust attention on competitors?

Steve: Check out the post from Microsoft Public Policy blog. A lot of times, initial complaints will come from competitors. We’re not silent. Sometimes it’s unsolicited and sometimes it’s because we’re asked.

We can comment on things that are making it harder for us to compete. But legality is determined by regulators, not by Microsoft.

Danny: What makes you concerned about your competition?

Steve: There are a lot of places where it’s very hard to break through. I’d love it if advertisers would share with us their experience on Google. We could probably offer the advertiser a better offer. Google keeping that data proprietary makes that difficult for us.

Danny: In China, Google might be pulling out. What’s that mean for Bing?

Steve: I think the real force in China isn’t Google and it’s not Bing — it’s Baidu. It’s relative to market politics in China.

Danny: What does Firefox tell you about why it uses Google as the default search?

Steve: Of course we want greater distribution. You could talk to Firefox about it.

Danny: Here’s another question about distribution. There are rumors that Bing might become the default search for the iPhone.

Steve: We’re going to continue to better Bing search for iPhone. But I’m hearing the rumors, like you are. With Yahoo! we will have multiple forms of Bing included in distribution deals. Part of distribution is buying and part of it is selling.

The story starts with a great experience. The core Bing experience, Bing for iPhone, Bing in a number of other forms.

Danny: Did the iPhone Bing App’s success come as a surprise?

Steve: It was free, so it had the right price tag. We knew there’d be a lot of curiosity. And we put out a good product. So, no, it wasn’t a surprise.

We have a better balance than anticipated regarding the queries on all our mobile platforms.

Danny: Will people have the option to choose search engines when the Windows 7 phone comes out?

Steve: My guess is we’re not going to get a huge amount of support for Windows phones from operators who don’t want Bing.

Danny: Will we get a Bing app for Android?

Steve: It’s a little more complicated. We’ll have to wait to see what develops for Android.

Danny: How do you see mobile overall in terms of the search space? Is it the year of mobile we’ve been waiting for?

Steve: We are at a year for mobile. I don’t predict a drop in queries coming from PCs, but I do see a rise in queries from mobile. It’s still too early to predict what kinds of queries will take off on mobile. There will be a whole class of query that will be mobile specific.

Danny: Is there something culturally different in Google vs. Microsoft when it comes to search?

Steve: I don’t work there so I can’t really comment. The #1 thing for Google is that they did search right first. Put aside culture. We started later and there’s a value for incumbency. We’ve got a lot of talented people focused on search innovations and it’s working. So whatever this culture thing is, we’ve got everything, even the other guys, moving the pace of search innovation forward.

Danny: How big a chunk of Microsoft do you see search becoming?

Steve: You asked me earlier what our ambition is for market share, so I’ll leave it at that. We do have ambitions to grow. First it’s got to break even, and then it can make a profit. It’s hard to predict, but it will be a growing share of Microsoft.

Danny: Are you at the Bing-plex a lot?

Steve: We’ve got 7 or 8 big business, plus a lot of customers, so it’s hard to pick apart, oh I’m working on this one, or I’m working on this one. I’m usually at an intersection. When it comes time to drive the search team, we’ve got a lot of talented people doing that. I give a lot of feedback. Things are improving. I’ve fallen in love with our real-time search.

Steve: We have a great relationship with Twitter, but it’s not clear whether we need to own the company or not. As an independent they have a lot of value and credibility with their user community. Would they have the same credibility if they were under another company, that’s not clear. So we want to have a strong partnership.

Steve: The things I’m going to say broadly I’m more likely to say on a page than in a short tweet. I do have a stealth account where I share basketball scores with my son’s team.

Danny: You said that you’ve given the search team constructive criticism. What was the last thing you gave them?

Steve: Key lime pie. I wanted to show my wife our new recipe search and I used what she was cooking at the time and the results weren’t there. We’re much better now with key lime pie.

Danny: What are you focusing on improving and what are you happiest with?

Steve: We’re working on relevance, especially tail queries. Then we want to take this show on the road. I’m happiest with the current Bing Maps, especially the Newseum App where you can see the front page of newspapers from across the world.

Q: Did the Cashback program work and will you be investing more, less or the same?

Steve: It has worked, it hasn’t worked fantastically in changing the economic structure of the business, but it has had positive results. I see us continuing cashback, maybe change some things around, to make it a more potent thing for the merchant as well as the user.

Q: I was impressed with the Windows phone 7. Where does Microsoft see money coming in from mobile? Licensing? Monetization of apps?

Steve: How does Apple make money on phones? A licensing fee. We happen to split that with the phone manufacturer. Is there also going to be search and app profitability on the phone? Yes, so we will seek to develop multiple revenue streams around the phone, including the licensing fees on the phones themselves.

Q: Follow up: monetization of apps or will HTML 5 take over for apps?

Steve: How you construct something and how you monetize it only have the vaguest of relationships.

Q: Where do you see Flash and Silverlight going for mobile?

Q: Does PPC monetize on mobile?

Steve: It turns out some people do click on ads from mobile. There will need to be more innovation and IQ applied to mobile advertising. How to bring that together and rethink the fundamental UI and design model of search. How organic and paid get laid out on a phone.

Steve asks the audience: We’ve spent a lot of time thinking of the evolution in privacy and confidentiality from the user perspective. Different users have a range of needs and desires and marketers and others should all want to respect that, yet we don’t want to go to the other extreme because some are willing to give up some privacy for better relevancy and services. I’m curious to know if that’s a major issue on people’s minds.

Maybe 20 percent of the audience raises their hand when Danny asks who is concerned with search privacy. If you want to give Bing your feedback on this question, e-mail steveb@microsoft.com or tweet @bing.