TL;DR version: At Google, it’s all about the user experience.

Before things really get started, Matt Cutts runs onto the stage after Danny Sullivan and Amit Singhal sit down. Matt says he wants a group selfie.

Ride that selfie train, my friends!

Hummingbird has been a complete rewrite of our system. The last time we did a complete rewrite was shortly after 2000. In the last decade, numerous new technologies have been built, including Knowledge Graph. And people are speaking queries naturally. To serve the future you have to change things. One thing that’s changed is that people are going to type 2-word queries. The mobile revolution has forced us to rethink a search system that is awesome, like Google has always sought to be.

Natural language, longer queries, how close various words are in order to signal a concept — these are things Google has been working on.

Danny asks whether Google looks at “Obama” and understands that’s a person. Amit says that’s indeed what Google understands, as communicated in the motto “things not strings.” Strings scientifically hit a limit as to how much you can work with them. In this more sophisticated system, they can look at “Bush” and understand if it’s Sr. or Jr.

Danny asks about links and if it still functions as a primary ranking signal. Links, Amit says, are clearly an important signal that shows the importance of popular content. But at the end of the day they look at a holistic view of the type of content a site has. 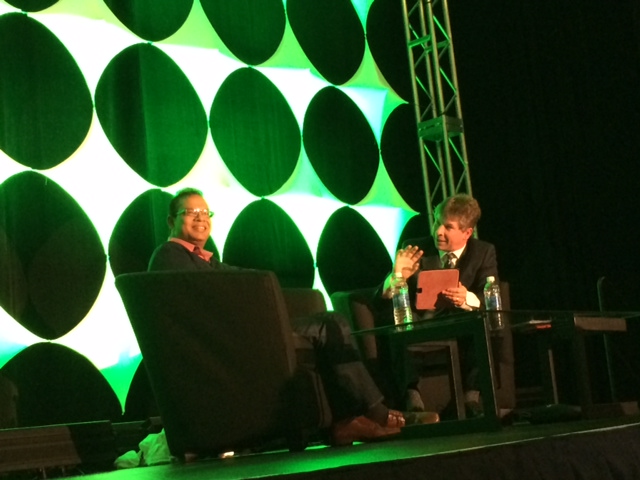 Double checking, Danny asks if social signals are still not being used for ranking. Amit confirms that’s correct and that social signals are unreliable as currently available. As they become available they’ll test them and could add them. Google+ is different because the data available is reliable, and thus users may see a great impact based on Google+ social signals when they’re searching logged in. This comes from the fact that Google believes that it serves the user based on their needs and psychology.

Beyond social and links are there other signals you would use to determine if a page is relevant, Danny asks? Amit goes back to the perspective of the user — what would the user find useful. Things you think are useful are the same things the Google engineers think of. Danny brings up authorship of content being something he could see as a signal and Amit says possibly it could.

May 2012 was the launch of Knowledge Graph. Danny asks how has that gone. Amit says it’s awesome. How far is the Earth from the sun? Yes, Google could deliver formulas and statistics, but what about the straight answer?! Giving straight answers when the circumstance calls for it, users love that experience.  Google views Knowledge Graph as their “understanding of the world.” Danny asks if there will be a day when Google delivers all results as answers. Amit says that the web is a Swiss army knife and you’re used to using all the tools. You’re comfortable with the knives and scissors. But sometimes you need a corkscrew. Knowledge Graph is a tool that you can use on the go, especially in the mobile world. When you add Knowledge Graph to your Swiss army knife, you use your knife more often and it becomes more useful and you carry it with you more. They don’t only use the one new tool more, they use all the tools available to them more.

How is search handled as a product within Google? Search is unlike some products like Android or YouTube because it crosses boundaries. Amit is a strong believer in the fact that beautiful products are built when separate areas collide. Ocean reefs see the most diversity of underwater life because they’re the clashing of worlds. Natural language processing, Knowledge Graph, and the next emergent area, these are all going to collide for the best search, and there’s no reason to try to define the boundaries of search because of that.

In the world of technology, you don’t know what comes next. Timelines are so compressed. If you don’t focus on products users love you will get passed by. Technology will come from directions you can’t predict. Make sure you’re doing right by your users.

Over time, Google searches have been moving toward secure servers and losing reporting of keyword referral data. When it comes to webmasters, there’s lots of info available to you on webmaster console and you can improve your user’s experience with this data. Google users have said that having secure searches are important to them in today’s world. Amit is hinting at an announcement, some coming solution to stay tuned for, presumably that addresses advertisers’ needs for data and searchers’ need for security.

What should marketers focus on in the future? The world is changing. The last few years have been about the mobile search revolution. The power of devices is tremendous. Users are living in a world where they have all these devices all the time. Even in a remote village in India you can reach the World Wide Web. Technology and knowledge is an equalizer and that’s an awesome time to live in. Devices will get smaller. And they’ll reach another 5 billion users. Marketers should think of how they’ll reach those next 5 billion users on devices with limited technologies but vast power.

What’s been awesome? The progress that’s been made in natural language understanding.

Do Larry or Sergey ever come into your office and say let’s do this? And do you jump or? Amit says that one nice thing about working at Google is everyone is a user.

Who’s the best Star Trek captain? Amit’s not getting in the middle of this. Danny says it’s Janeway. The crowd groans and Amit says that’s why he didn’t answer! Danny gives Amit a gift of a tricorder and a series of funky noises wrap up the convo. :) 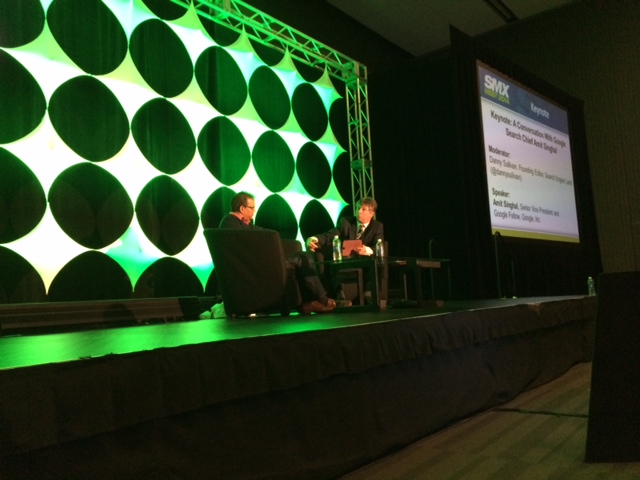 VIDEO: Watch the keynote address below:

Still on the hunt for actionable tips and insights? Each of these recent SEO posts is better than the last!
Bruce Clay on May 3, 2022