SEO and the Conversion Funnel

SEO and the Conversion Funnel

The conversion funnel is a visualization of the conversion process. Online, a conversion is the accomplishment of a goal on your site. A conversion can be anything from the purchase of a product to the download of a whitepaper to the sign-up of a newsletter. Basically it’s any action that represents a goal of your site.

It’s usually the case that not every visitor to your site will end up performing a conversion. From entering the site to placing a product in a shopping cart, to entering their payment info, the conversion process can require anywhere from one to many steps and at each step there is a percentage of users who abandon the process rather than continuing to the next step.

When the process from initial landing page to completed action is visualized as a series of steps, where fewer and fewer visitors are present for each consecutive step, this diagram is called a conversion funnel. 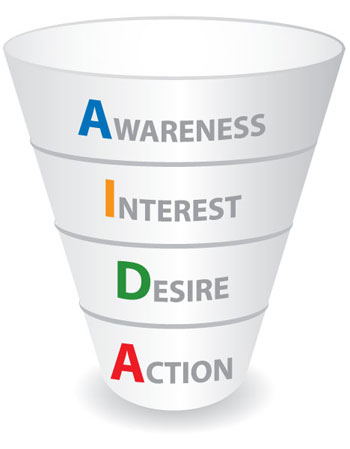 Ideally, a visitor to your site will move seamlessly from one step of the funnel to the next without hesitation until the conversion is achieved. Of course, this doesn’t happen every time.

For instance, you may define a conversion funnel on your site as a series of five steps. When you look at the number of visitors which remain in the funnel during each step, it goes from 100 at the first step to 80 at the second step to 60 at the third step to 20 at the fourth step to 5 on the final step.

An online marketer can focus their efforts on identifying and correcting the conversion obstacles occurring during the fourth and fifth steps as the drop off rate on the other steps is less severe and the obstacles are likely not as strenuous.

Consumers don’t ask for things they don’t know exist. A visitor that is aware of the product, service, newsletter, whitepaper, etc., is at least one step into a conversion funnel toward buying that product, requesting that service, signing up for that newsletter or downloading that whitepaper.

(Note: We understand that a conversion can be anything from a product purchase to entering an email address into a sign-up form. In the interest of simplicity, from here on out “product” will be used to indicate the subject of the final conversion goal.)

As with all SEO tasks, an important consideration when optimizing the conversion funnel is considering keyword placement on the various pages involved in the conversion funnel. Keywords are how the visitor knows what they’re reading about and keywords should match their understanding and desire of the product.

For instance, if the official name of a product is “indigo-shaded mini-gidget” but it’s commonly referred to as a “blue widget,” it’s a good idea to make it clear to the visitor during the awareness stage of the funnel that you’ve got the “blue widget” they’re looking for.

It is during this stage that the visitor wants to learn about the product. They are looking for information about the product, considering their options, and figuring out their decision criteria. When optimizing the awareness portion of the conversion funnel, the targeted keywords will be broad and the list of keywords will likely be on the shorter side.

Once a visitor is aware of your product, they may decide they have no need for it, or that they absolutely have to have it, or they may fall somewhere in between. It is this spectrum that gauges the visitor’s interest in the product. It’s the goal of a marketer to elicit the visitor’s interest by spelling out exactly how the product can meet their needs or solve their problem.

It’s often during this stage that consumer intends to compare your product with possible alternatives so they can make an informed final decision on whether or not to make that purchase. The visitor is or is becoming familiar with the product, so descriptions will be more detailed, and thus the keywords optimized in this portion of the funnel are narrower and more focused than those in the earlier stage of the funnel. Whereas during the earliest portion of the conversion funnel the list was short and broad, the list of targeted keywords during this stage of the funnel will be longer and will include more long-tail terms.

Content for this portion of the funnel will include a long list of highly targeted keywords. This stage caters to the most intent visitors, those who know a relatively good deal about the product and, following a decision to purchase, will move onto the next and final step of the conversion funnel. The keywords targeted at this stage will have a low overall search volume and a low level of competition, but will have a high rate of conversion.

All of an SEO’s efforts can be traced back to a strategy for getting a visitor on the site to take a final desired action. The action stage is where this conversion event finally takes place. It’s the click of the “buy” button after the visitor has navigated his way down a path from initial entry, to learning about a product, to becoming interested in the product, to deciding to buy the product, adding it to the shopping cart, and entering his credit card information.

When you’ve reached the action stage of the conversion funnel, the optimization goals revolve around simplicity and ease of use. Identify any requirements to purchase that may be off-putting to visitors at this stage of the funnel. Excessive forms or required fields may be enough to change a visitor’s mind. Streamline the action process so that it’s effortless and short. Give them as little reason as possible to abandon this final step.

The way to do this is to track visitors entering the site, evaluate their movements on the site, pick out those visitor paths that don’t convert as hoped for, determine why they abandoned the conversion funnel, and then address and improve that obstacle. Google Analytics is a free analytics tool that can track visitor behavior on your site and offers a useful report for performing the above process.

The Funnel Visualization Report will display the number of visitors that follow along each step of the conversion funnel you define.

As explained in Google’s Analytics Help, there are certain requirements that must be met in order for the Funnel Visualization Report to be applicable, such as a conversion goal with a defined URL as well as a monetary value that can be assigned to a completed conversion. If all requirements are met, you may set-up a goal and define the steps of the conversion funnel, using anywhere from one to ten steps. Google created a short video that explains how to implement funnel visualization through Google Analytics.

For permission to reprint or reuse any materials, please contact us. To learn more about our authors, please visit the Bruce Clay Authors page. Copyright 2009 Bruce Clay, Inc.