Every time Google does something on even the smallest scale a big brouhaha is normally made by all and sundry, when Gmail went down last week even for even a few hours, countless trees were sacrificed in order to bring the news that even the infallible Google could still hiccup. When Google announced a ‘change under the hood‘ of their market share leading search engine, there was the requisite incredulous response, so without further adieu (or any more fluff) I give you our take on Google Caffeine.

According to the official Google Webmaster Blog, Caffeine is the first step in an iterative process that Google will use to take search into another evolution in terms of index size, indexing speed, accuracy and comprehensiveness. Is this a response to Bing or as Google says simply the next stage in a project Google has been working on for months? Whatever the answer to that question is, there are some substantial differences between the regular Google search and Google Caffeine.

Speed. In today’s instant gratification world where speed is everything, the already lightening fast Google has been improved by Google Caffeine. Most Google Caffeine searches take about half the amount of time to process than the regular Google search. This change in milliseconds might not seem like a big deal however a research paper authored by Google, suggests that web search latency of 100 to 400 ms reduces the daily number of searches per user by 0.2% to 0.6%. When you are talking about many millions of searches every day, this becomes a big deal.

The Caffeine Google index seems to be much bigger that the regular search index, there could be many contributing factors here. Maybe the Google spider has been re-engineered to be more efficient and find more content. Another reason could be that Google Caffeine has measures implemented within it to make real-time search more visible and relevant, so more items like tweets, friendfeed info and more are being indexed by Google. This means the big G can be on the forefront of breaking news and present this news to its searchers. With Google Caffeine, Twitter accounts seem to be ranking much higher than in its regular search results. Here is an example to show the increase in the size of the index. 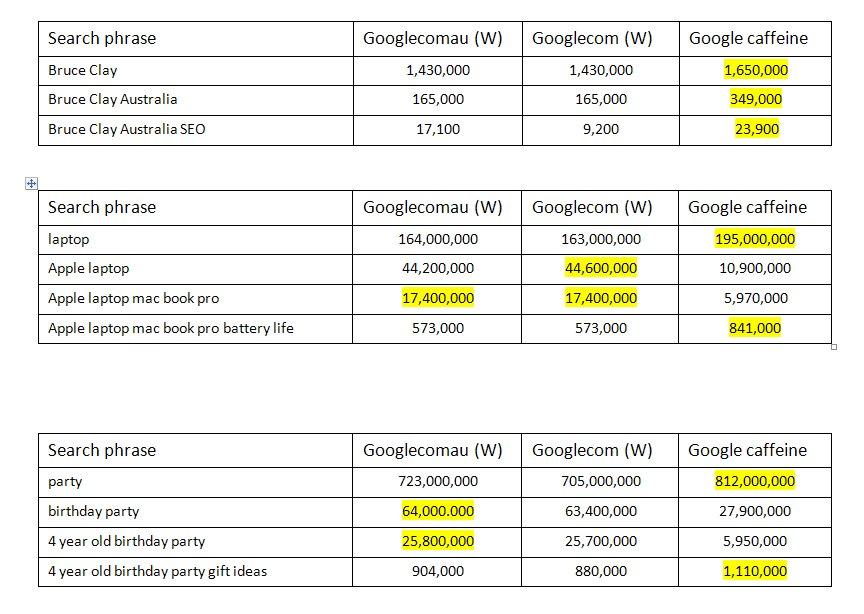 Preliminary research indicates more pages in the index at a high level but more emphasis as the search phrase lengthens. A strange things happens with really long phrases though, when a really long phrase is entered ( 6 words or more ) the index for that search results seems to be bigger than the regular Google index, i am a little stumped by this one, any genius PHD’s out there care to venture an explanation? So more options when you are searching a broad subject are offered while the focus narrows when you conduct longtail searches (for the most part).

So with Matt Cutts saying “Biggest update since the Big Daddy update in 2006” and “It is the re-architecturing of the Google indexing system” what SEO considerations should we afford to Google Caffeine right now? Nothing. Dont look at me with that shock and horror in your eyes you didn’t let me finish, nothing right now. Google Caffeine is just a test, it’s a demonstration that Google is still striving to be the best in search while also asking our feedback in the process. There are however a few elements from Google Caffeine that will be melded into the regular Google search algorithm sooner rather than later, these elements are:

Personally I think alot of the improvements made by Google Caffeine have already been implemented in the Google algorithm and the engineers are just waiting for the say so from the higher powers to turn up that dial. Whatever the case is, Google caffeine shows a commitment by Google to be continually innovating, never resting on their laurels and striving to be the best, no matter how popular they currently are.

P.S we are conducting some small internal tests with Google Caffeine and will let you know the results once the tests are completed.

Hi John, thanks for the stumble, yes it will be very interesting to see what happens when Google implements some of the changes made in Caffeine to its regular search algorithm

Great post.I have been taking a peek at Caffeine and I like the pic where you show the actual result differences/ thanks
Stumbled