Yesterday, I went to the Fourth Estate Domain to see Lars Rasmussen being interviewed by Mike Walsh about Google Wave.

For those who haven’t heard of it yet, Google Wave is a communication and collaboration tool that has been developed in Sydney, Australia by the team led by the brothers Lars and Jens Rasmussen, co-creators of Google Maps.

History
The initial idea behind Google Wave is to replace the ageing e-mail system, which was invented in 1961 at the MIT, even before the invention of the Internet. After four decades, it was about time someone came up with a way of rethinking this technologic dinosaur! So after Lars and Jens had finished developing Google Maps, Jens came up with the idea of re-inventing the way people communicate and collaborate on the web. 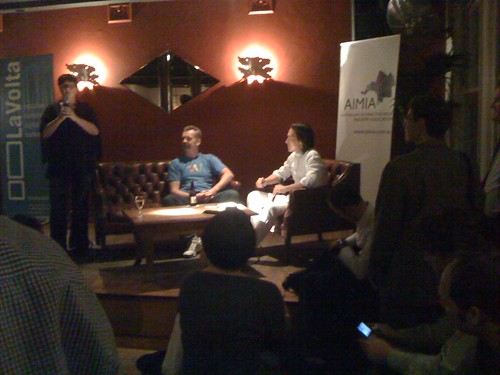 So, what is Google Wave? Well, according to Lars, “it stands in the middle of a triangle between e-mails, instant messaging and collaboration tools”. E-mail really is the transposition of the mail in an electronic version: Writing to a recipient, a standard e-mail conversation is made of multiple e-mails being exchanged between multiple recipients. 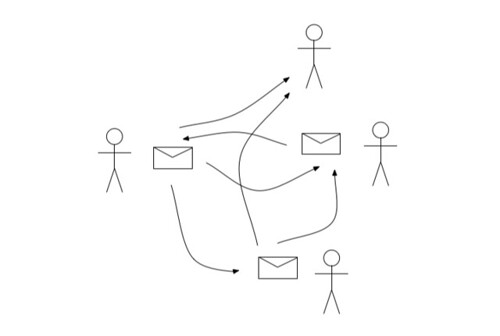 In contrast, Google Wave lives in the clouds, at the centre of the conversation. The participants are being invited to participate, exchange files and more, allowing Wave users to centralise the collaboration and communication processes into one place, therefore saving time, and ensuring full tracking and recording of the collaboration. 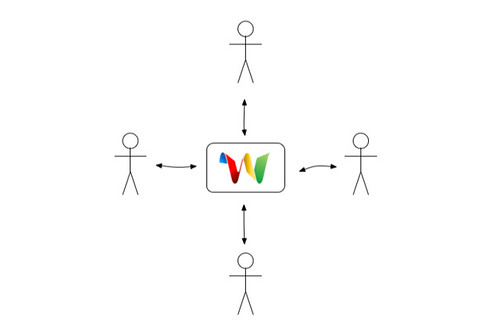 So in summary, this is how Google Wave looks like: The first narrow column on the left hand side contains the navigation and the Contact list, the second column is the Inbox, listing all the waves (communication threads), and the column on the right hand side is displaying the active Wave. It really doesn’t look that different your standard e-mail account. 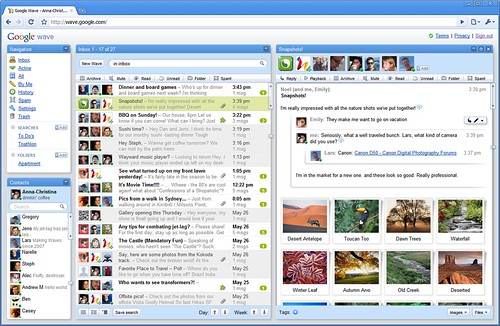 Obviously, there is a reason why I went to see Lars talking the other night, which is honestly, I am a big fan of this project, and here is why:

Decision Making
Google Wave can potentially significantly improve the decision making process at any level, be it with your friends to decide which movies to go and watch like in the Google I/O example, or with your business partners, to efficiently arrive to a conclusion.

Document collaboration
Second, it can improve the collaboration process when working on documents. With Wave, many collaborators not only will be able to edit a document together simultaneously, but they will also be able to discuss it, and exchange other types of information like maps or meeting request, all within one wave. When collaborating on a project and exchanging multiple documents with multiple recipients, e-mails are really getting confusing these days. Obviously, cloud computing solutions such as the famous Google Apps suite or Microsoft Office online allow us to collaborate efficiently on documents, but each tool is imitated to its application.

Future development
Finally, what I think is the most interesting part of Google Wave is its growth potential and future development. It is an open-source protocol in which everyone can participate, constantly improving it, and potentially applying it to multiple uses, using the Wave API.

However, this project is still under development, and even when it becomes fully operational for everyone to use it, some questions remain as to how this new Google project will be like:

Project Scale
There are 1.9 billion e-mail users out there, and having them adopt this new protocol is a very very ambitious project, and honestly, only a few companies could dare trying to implement such a large scale project. On a company perspective, taking into consideration that some still have issues migrating from Windows 95 these days, migrating the entire communication system will take time.

Resistance to change
As a direct consequence of the previous point, and like Lars admitted: Google Wave requires some practice. Users might not have the patience to adopt this new protocol. Companies might be reluctant to migrate to Wave, considering the cost of training and implementation compared to the potential time saving and efficiency benefits resulting from its adoption.

Wave – E-mails compatibility
Realistically, it seems difficult for an organisation or individual person to adopt Google Wave without being able to use it to communicate both with e-mail and Wave users. Lars mentioned that some developers might be working on this, but nothing official has been announced yet.

Previous Google communication projects
Mike Walsh joked about this point with a point of sarcasm when he mentioned that the previous communication projects initiated by Google such as Google Talk and Orkut have not exactly been major successes. So what to expect from such an ambitious project?
Realistic or not, this project is really exciting, if there is one company that can revolutionise the 60+ years old e-mail technology, Google is to me the best candidate.

Monetisation
We can’t expect from Google to develop such a project without finding a good way of making profits out of it, which is fair enough, but how?
Will Google place targeted sponsored ads like it does on Gmail? If this is the case, it will only be able to do so for their Google Wave interface.
What about the applications or extensions of Google Wave? Are they going to be free, like the Firefox extensions, or will it become a new iTunes-like market place with free, free-limited, and paid apps? Lars briefly mentioned paid applications based on the wave protocol; let’s just hope that this will not be the case for all of them.
For those of you who are interested about learning more about the Google Wave project, here is the Google I/O one hour presentation:

Alternatively, the 10 minute abridged version of the same conference:

For those of you who, like me, haven’t got a Wave account yet, you can request an account on the Google Wave sign up page, and if you are willing to get involved and contribute to the wave project, you can request a Google Wave developer account. Also, dear developers, if you wish to crack your head a little (or a lot) on this, you can visit http://code.google.com/p/wave-protocol/.
Google announced the release of new accounts on September 30th, and Lars mentioned this release will be split even between standard users and companies with existing Google Apps accounts. So Google, if you don’t mind, swing a wave account my way? Thanks.

Thanks, BruceClay – Google Wave is a really lovely reading. I really like your blog theme actually, I continually come back here and I don’t know why. I guess I just really like your web site lol…

nice post, tell me one thing would it play any role in search engine optimization also?

Hi there, anyone got a spare invite? Please share! ;)
Cheers!

i got invite to use google wave with my google apps but somehow can’t seem to find anywhere to access it..

Hey love this post, I think it is concept of Cloud Computing. isn’t it.