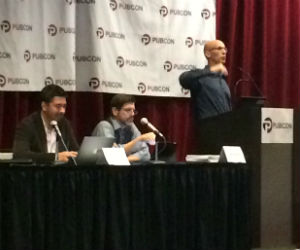 How much do you know about Reddit, and are you using it the right way to build your online presence? Brent Csutoras, social media strategist and content marketer, takes center stage at Pubcon Las Vegas to help you not only understand Reddit but also learn how to achieve long-term success on the site.

Reddit is one of the aggregate sites that still consistently grows. Digg grew, crashed, and died. You can count the social aggregator sites that tried and failed. One of the largest social networks, Reddit never makes an effort to grow or to sell you on their site. They’re a massive community built of influencers — people likely to make a topic viral.

While it’s a huge community, it’s very misunderstood by businesses. There are 100 million U.S. visitors that are educated, influential spenders.

Reddit is a platform. It’s a software solution. It’s not one community. Anyone can create their own community and can make their own rules. There’s no standard from one community to another. Think of it as being like WordPress or Tumblr. You start as a user, but if you create a subreddit you will be a moderator. Moderators can also be assigned by other moderators. Admins actually work for Reddit. They don’t get involved in subreddits unless they are violating an overall site rule.

Be anonymous. That’s how it’s done on Reddit. If everyone’s anonymous on Reddit, then you should be, too.

Become a redditor. Social is the place you should be marketing. Create content specifically for Reddit. Understand the lingo used by redditors (members/users), such as x-post (short for cross-post), FTFY (fixed that for you), and TL;DR (too long; didn’t read).

If you’re in the space, you care about learning, and you’ll actually get into Reddit because there’s no better place to find out more about how things are progressing in marketing. It’s more than a community. It’s generally a great tool.

Comment before submitting. There’s no rule for how long you should wait to submit before you comment. Commenting is where the emphasis is on Reddit. Comment on upcoming stories. Look at posts that are rising and find ones with only one or two comments where you can add some thought.

Find your passion in subreddits. Check those areas every day, because then you can have something to say quickly and authoritatively. This helps you become a better redditor and helps your profile, success and understanding.

Understand the difference between a large community and an active community. Total count of subscribed users is not as valuable as how many users are here now. Check Redditmetrics.com. Identify subreddits that are targeted and have high activity levels.

Read the community rules every time you submit because they change. They don’t care if you don’t know and they’ll ban you, and you may be silent banned and not even know it. Read the rules so you can tell if they preclude you from doing your ultimate goal, submitting links, for instance. Why waste your time somewhere if you can’t do what you want to do?

Research. Do a domain search (site:) for what is already working. In the subreddit, research the top and controversial posts. Submit at the right time — 10 a.m. EST, or whenever the right moderators are active. After 24 hours, the Reddit algorithm strongly devalues the content.

Don’t spam Reddit. It doesn’t work. It’s not worth your time. What does spam mean? 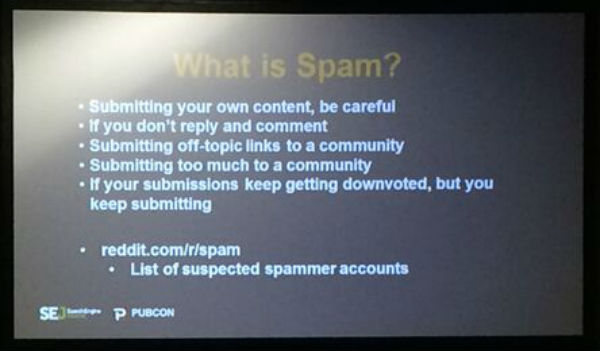 Reddit.com/r/spam — List of suspected spammer accounts. Spend a couple hours there and you’ll see the patterns redditors use as spam. You can also set an alert to see if your name is mentioned there.

Reddit-focused content — Re-create popular concepts over six months old. You can do a remix/spin of popular content. Or you can resubmit the same content because sometimes there’s a video that you may have seen a few times but it’s cute and you like to watch it again.

Reddit Gold — You, influencers, moderators, you may want to be a Gold Partner. It’s a few dollars a month that can give your belonging an edge.

One Reply to “Long Term Success with Reddit #Pubcon Liveblog”

Thanks for the insights. Not a huge users of Reddit but I wish I could become one.