Jay Baer, president of Convince & Convert, opens the keynote by explaining that marketing is more challenging than ever – attention spans are shorter, consumers demand more knowledge, and what worked twenty years ago won’t work today. In a keynote packed with real-world examples, Baer shows how brands are wielding transparency and “Youtility” to build trust and business.

Being a great marketer is harder than ever. There are three enormous obstacles to great marketing.

We spend more time looking at phone and computers that we do at televisions. People are doing their own thing, and it’s more difficult to reach them.

2. Marketing and customer service have collided.

Ten years ago, what would you do if you stayed at a bad hotel? You would write a letter or call customer service. But today, the Internet has enabled us to be passive aggressive. We take to the web to write reviews like this: 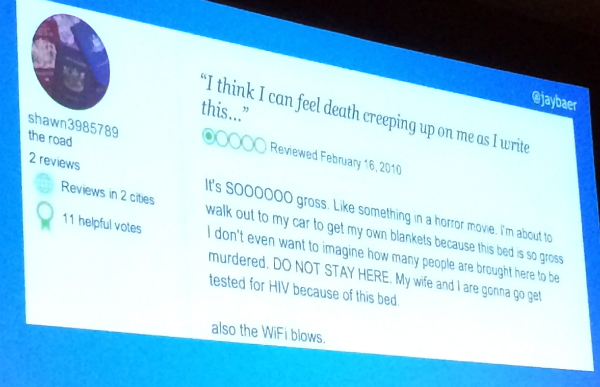 Customer service is now a spectator sport. All the trust and awareness you build with your Internet marketing can be undercut by a review like this.

Stop being amazing and start trying to be useful. Amazing isn’t a strategy – useful is. The difference between helping and selling is just two letters – but those two letters make all the difference. When you help someone, you create a customer relationship for life. It’s not about right now. It’s about lifetime relationships.

Baer shares an example. Hilton has a Twitter handle called @HiltonSuggests, and the whole aim of the Twitter account is to help people with traveling questions. Hilton called together 20 employees to look for ways to help travelers in their spare time via Twitter. The aim is to help, not sell. 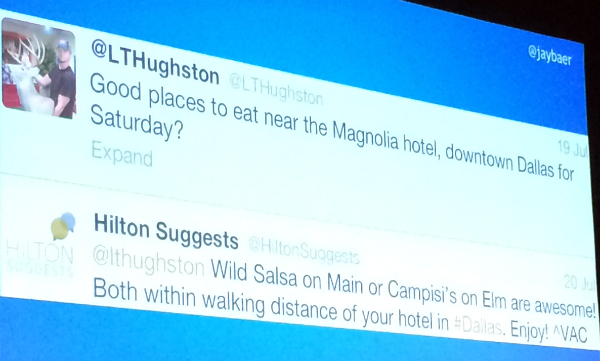 Herein, Hilton is playing the long game. Hilton is making relationships. Notice in the above example, Hilton doesn’t mention their own properties.

Youtility: marketing so useful that people would pay for it.

Make marketing that people cherish rather than marketing people tolerate.

Useful articles are forwarded 30% more than average. We are wired to appreciate youtility.

Do you have the courage to create youtility?

Consider Clorox’s Find a Stain/Take a Spin app. It give you information on how to remove a stain. Clorox determined that they are not always the best answer. And if Clorox was always that answer, moreover, that would change the experience of the app. Clorox considered sharing coupons through the app, too, but decided not to – because it would make it an ad, rather than a piece of Youtility.

3 Ways You Can Create Youtility

We crave information like never before. Google interviewed tens of thousands of users and found that the average American consumer need 5.3 sources of information (review, article, testimony from friend) before making a purchase (2010). In 2011, they needed 10.4.

Every single person here has access to all the world’s information at all times in their hands, via smartphone. Today customers are hyper researching everything, because why wouldn’t they? There’s no barrier to research.

Baer shares an anecdote. He was recently watching “Orange is the New Black” and wanted to know where he had seen one of the actresses before. He simply looked her up on IMDB on his phone. After getting the information he wanted, he considered the fact that before the Internet, this would have been impossible. He wondered what it would have taken to get the answer – he determined at least four hours to go to the library and scour information. He reasoned that he wouldn’t have done that, and would have just settled on “I don’t know.”

But today, “I don’t know” is no longer an acceptable answer for anything. Your phone knows, Siri knows, and we all have to know.

He shares an anecdote about a swimming pool and spa company that was on the brink of going out of business. They decided to write blog posts on every customer question they fielded. On evenings and weekends, they wrote 400 blog posts (they now have well over 1000 blog posts). Those 400 posts turned their business around. They now have more traffic than any other swimming pool company in the world.

B2B customers contact a sales rep only after 70% of the purchase decision has been made (Sirius Decisions 2012).

The better you teach, the more you’ll sell. Relationships are created with information first, people second.

The truth always comes out. There’s nowhere to hide. It didn’t used to be that way. Smart marketers realize, then, that they need to come out with the truth first. Smart marketers choose to be radically transparent.

This is Domino’s entire marketing message: “Hey, our pizza used to suck. Now, not so much.”

Trust is the prism through which all business success must pass. Without trust, nothing else matters – not search rankings, not price, not anything. The best way to keep trust is to be radically transparent and give away useful information.

McDonald’s has a functionality on their Canadian website where consumers can ask any question. And the questions are not easy.

“Maybe you could post a picture of these happy ‘family farms’ in which you say your animals are raised with the best care?”

In the old days of marketing, businesses would have run away from questions like this. Now they run toward them. What did McDonald’s do? They made a video showing McDonald’s Canadian Senior VP Jeff Kroll visiting a farm in Canada where the animals are raised.

Since implementing this Q & A functionality, the trust rating in Canada has gone up 31%.

Be hyper relevant in some particular circumstance. Take, for example, The Corcoran Group. Every time it rains in New York City, they share a tweet that directs people to a very useful piece of content they created. 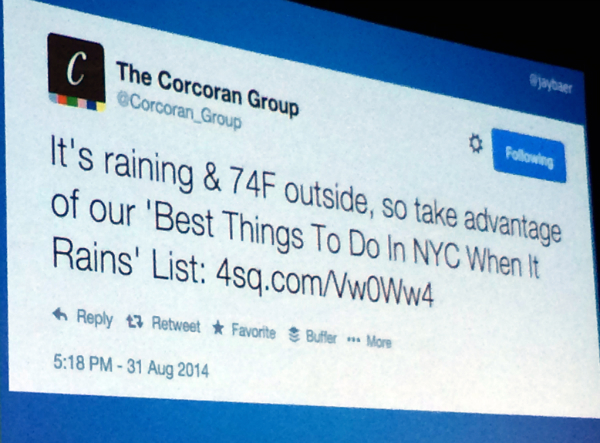 Nowhere in the article do they attempt to sell – but they’re creating relationships by being useful. And relationships like this lead to top-of-mind recall.

Great Youtility can transcend the transaction. Give yourself permission to make the story bigger – you don’t just have to talk about your own stuff. You can talk about other things that are relevant and useful.

Focus on what people really need. Nobody ever, in the history of the world, has ever needed socks. But everybody in the history of world has needed their feet to be warmer. Know the real need. Know your customers better than you already do.

We are surrounded by data, but we are starved for insights. We have more data than ever before, but every time we run a report we are by definition treating our customers as a number and they are more than that. If you are not regularly having conversations with customers in person or on the phone, you are doing it wrong. Talking to them will lead you to amazing, useful ideas that can help them.

Twitter was not created to be the world’s shortest press release outlet. The only reason brands are even tolerated in social is because it keeps us free for the rest of us.

Youtility is a process, not a project. Inspiration doesn’t respond to meeting requests.

Baer’s book, Youtility: Why Smart Marketing Is About Help Not Hype, is a NY Times best-selling business book.