Session No. 2 coverage and I already feel like I need a gallon of water transfused into my body via IV. The good news is my buddy Tony Adam from MySpace is sitting next to me.

In this session, we’ll take an in-depth look at Google Instant’s impact on search results thus far, with a focus on what marketers need to know to maximize performance in the new world of search results. This is another big panel; fingers don’t fail me now.

Danny starts by talking about a press event at Google where they announced Google Instant. He jokes about the panic people felt, his exact word was “slaughter” – he’s being sarcastic, of course.

First up is Othar Hansson from Google. He’s talking about how he was at a party with other Googlers before Google launched Instant a year ago and people were thinking it was insane, and the end of SEO. They thought it was crazy because of the technical challenges. But in the end, it was executed great.

Google Instant is about getting to search results faster. This makes users happier. We like to make search faster. Instant Previews is motivated by making search more fluid through Previews. Today, they announced Previews was available for Android.

What you now know about Instant: Users notice the changes now when they type. But usually, people don’t notice what’s new. There are four main features: Instant results, scroll to search, prediction, keyboard nav – and now working on other features. In eye tracking, tests show that users focus on the autocomplete and then focus on the screen when they find what they want. 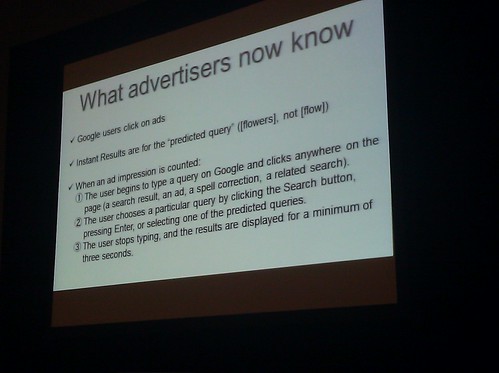 What webmasters need to know: Have good content that’s able to be crawled well and ranks well. Think about the words users will type to find your pages. If you’re in real estate, you don’t need to be worried about people seeing a result for REI. They will likely type until they see “real estate” results. Impression counts may change because of three-second pause queries.

Chrome Instant is now an opt-in in Google Chrome – he thinks it’s Version 9. Instant on mobile is an ongoing opt-in. In Toolbar, they launched it in the Labs feature for a while (may still be live).

That’s the end of his talk. Avi Wilensky is up. He jokes about his height and if anyone can see him behind the podium.

He is telling a true story about a man named Bob. Bob has some carpet stores and is not interested in doing online business. Bob’s reputation was his pride, and was reflected on the Web through Yelp and other places. But, he started seeing some “weird” things online once Google began rolling out some changes, like “Bob’s  Carpet vs. Paul Carpet,” and bad reviews.

Bob calls Google. No response – ha. Bob starts looking for SEO firms. Nothing happens even after six months with an SEO firm. There’s still complaints showing up. He hires another SEO firm. No results.

Google Instant launches. The predictive searches begin rolling out negative results in the search results. Bob freaks out and starts throwing more money at the problem. Sales are down. Bob begins to drink. [Avi has some really hilarious slides with stick figures. He says it was the work of his graphic designer.] Then Bob hires Avi’s firm.

His research shows Google’s suggest is not reflective of what’s going on in the SERPs, stuff you wouldn’t normally find on the regular SERPs. It’s sensitive to what people are searching for.

At his firm, they did some tests where they crowd sourced some people to run the same queries that are not popular, “Avi Wilensky is a rock star” – because he says there’s nowhere on the Web that would say that about him. They found that it began showing up in the autocomplete in Instant.

He shows an autocomplete that starts with “SEO is” and the results are not good for the SEO image [Try it, it’s kind of funny]. Point is, that it’s not reflective of what’s on a typical SERP. This can hurt businesses.

That was entertaining. Now we have Erez Barak to talk about SEO and user behavior.

Google Instant: Top questions people are asking. Staring with: What goes into predictions? This morning, he types in “w” into Instant, he gets “weather” results in autopredict [location]. Then, types in “a” – he gets AT&T because he’s been having issues with them lately [behavior]. Seeing signals like local, social, popular, trending, etc.

Next, question: What’s going to happen to keywords? Keyword diversity has not changed much. As on online marketer, you should know it does change for some websites. The same amount of long-tail searches typically stays the same.

Looking at click-through rate, the next question is, has organic CTR changed? They did some research where they designated that a head term is anything with more than 1,000 searches – their research showed that for head terms, there was a big jump for Position 1 after Instant. Long-tail shows better overall CTR on the first page.

Next up is Anthony Coleman talking impact on paid side of things. It’s his first time speaking ever. We’re on your side, Anthony!

The negative impact he’s seen on small business and long-tail keywords is the ADHD impact. People get distracted by the suggestions. The multiple options distract them form their true intent. He saw with one client, a 63 percent drop.

How to address Instant? For clients, they started targeting keywords that aren’t complete, like for “dentist boulder co” would be “dent bould”. Geotargeting for the correct locations is also helpful. Target multiple geolocations, not just metro areas.

That was a quick talk. Next is questions.

But, before we go into questions, Othar says Google views it as abuse for people who try to manipulate autocomplete in some way (referring to Avi’s crowd sourcing tactic).

Avi says they did what they had to do to help the client since Google is not available to resolve problems for users unless you’re a high-paying AdSense customer. [Wow, cojones.] People are applauding.

Q: Danny asks Avi what the perfect world would be. [Can feel the tension, just a little. But, it’s a friendly debate.]
A: Avi says he’s standing up for the little guy. He wants Google to do more fact-checking. He says the question is, why would Instant serve results that wouldn’t otherwise be available online?

Q: Can a brand opt out of having brand terms in Instant?
A. Othar says no.

Still on the hunt for actionable tips and insights? Each of these recent SEO posts is better than the last!
Bruce Clay on July 12, 2021

Core Web Vitals: First Input Delay – What It Is and How to Improve It for SEO

When I asked Matt Cutts if the number of new queries they were seeing at Google was still 25%+ he didn’t answer. I think chances are it’s not providing the results they wanted. While I can appreciate the goal of Instant was to expedite the search process it’s also been to consolidate search queries to drive up Adsense revenue.