Good morning and happy Tuesday! Yesterday was a great day of learning, and I had a blast liveblogging for all of you. My goal is to only get better at reporting, so that the people at home don’t miss a beat by not being here.

Today’s keynote features Danny Sullivan, editor-in-chief of Search Engine Land, to talk about recent changes in search and where things may be going in the future.

I’m like 45 minutes early today and nabbed myself a front seat. Lisa Barone of Outspoken Media was already here, working, when I walked in – talk about being prepared!

I know I haven’t had enough coffee yet because my normally sucky typing skills are at uber suck right now. (BTW, I do see the irony in the fact that I am a writer and don’t type very well.)

Danny just came on and is addressing the slow state of the WiFi in here. The guy next to me asked if it was dial-up, it’s so slow. If you’re here and have MiFi, turn it off, it’s messing with our stuff!

We are starting off with The Biggest Search Geek award. Did you try your luck at that? And the winner is … [drumroll] – David Chung! He is receiving a really nice-looking award, actually. Sorry all you other contestants, you’re still geeks in my mind.

Danny is starting the keynote and says he forgot his notes. He starts off with saying search used to be cool. He first shows a slide of Google founders, then a slide of Facebook, then a slide of Charlie Sheen (as if that was the evolution of cool).

Danny declares, “Search is back, baby!”

People are talking about search, and it’s been going strong for the good part of 2011. It’s picking up in the mainstream headlines again. He’s talking about the Google spam debates, the “farmer” (Panda) updates recently and how it’s been at the top of the news stream.

A lot of people took search for granted for many years, but it never went away. Now, people are starting to pay attention to search again. People still used search, but it wasn’t important to them.

We’ve had an unprecedented amount of change recently in search. More than Danny has seen in his 15 years of doing search.

He goes over the DecorMyEyes incident, and talks about how huge the move that Google made to address that was. That was just one algorithm change in many to come. He talks about the scraper algo update, the “farmer”/Panda update.

Danny says he asked Google what the name of the update was, and they said it was Panda but not to call it that [long story], so Danny used Farmer.

Then later, they said they wanted to use Panda, so now we have two names for it: the Farmer/Panda update. He says he’s staying away from calling it “Panda/Farmer” because it infers we are farming pandas.

The question is, how does Google get rid of not only spam but unsatisfactory results? He says this plagues not only Google but Bing and Blekko as well. It’s not just a Google issue but they take the heat.

Danny says there has been some improvements with the algo change, but he thinks it will be like the “nofollow” for comment spam. Google presented that option when people were yelling at Google for the blog spam problem, and then people stopped yelling. Similarly, the Panda update may help solve the perceived content farm problem.

J.C. Penney is now the topic of conversation and the fact they were busted by the New York Times for paid links. Then, Overstock. And now everyone stopped buying links [sarcasm], and the world is safe.

Do paid links have to be policed or not? There’s so many gray areas. There’s “nofollow” madness right now. He says it would be nice to pass authority sometimes. We should reward sites that deserve the linking.

The links analysis system was designed to do that and now it’s gone. The entire system starts breaking down and is being fixed with duck tape. He then lists all the ways duck tape is useful – car bumpers and so on. But, it’s not enough.

More search 3.0: He thinks Google is going to start rolling out more news, video, shopping and such in the results. More search 4.0: humans via socialization and personalization.

He’s now talking the Bing-Facebook deal and how it socialized and personalized search. He’s poking fun of people who said SEO was going to die because of it. He’s now talking about the authority of people on social networks and how that’s now factored into search.

Social has arrived, and come into the search engines. They are still not quite sure how to deal with it; especially when you’re dealing with Facebook, which makes changes every couple of months. He said soon there will be “Zuck” buttons instead of “Like” buttons.

Danny talks about the importance of search within social networks such as Twitter. People are asking people in their networks for things, looking for help, looking for services and answers. This is search.

BSE: Before search engines; we would talk to families, friends, librarians, etc. These were our search engines, these were the people we turned to for answers. Suddenly, the Internet was where we received our answers.

We liked it because it was fast. We felt it was trustworthy, confidential — it wouldn’t judge you for any disease you might have. Humanity is now caught up in the search engine revolution. You can get answers right back at you from people again, in the social networks. We are now digital creatures.

The other big change is personalization. December 2009 and February 2011 are the dates that he refers to as “searchquakes.” When Google announced personalization in 2009, everyone freaked out. Then last month, Bing announced they were personalizing search results. People lose their minds over a one-time update. Search engines are always changing. 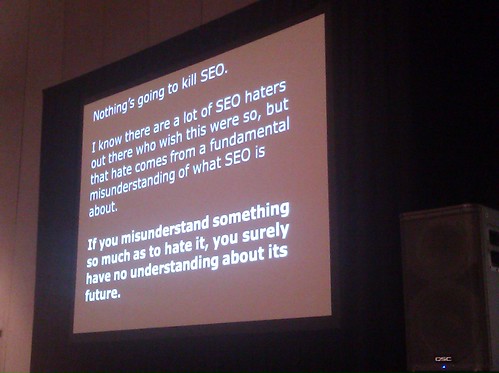 SEO is alive, he declares. (But, people still hate us.) He talks about the mainstream media mention of “SEO,” or in their words, “spam” in the show, The Good Wife. Those SEOs are all shady … and committing murders.

He just said ignore everyone who says SEO is dead. Don’t let these people get you down and continue to do good things.