Which Social Media Networks Should Your Business Invest In?

Are you evaluating the many social media networks and aren’t sure which would return the most benefit for your investment if you were to build an active presence for your business?

With so many choices, kicking off social media marketing can be overwhelming. To help you choose the best fit social networks for your business, we’re shining a light on: 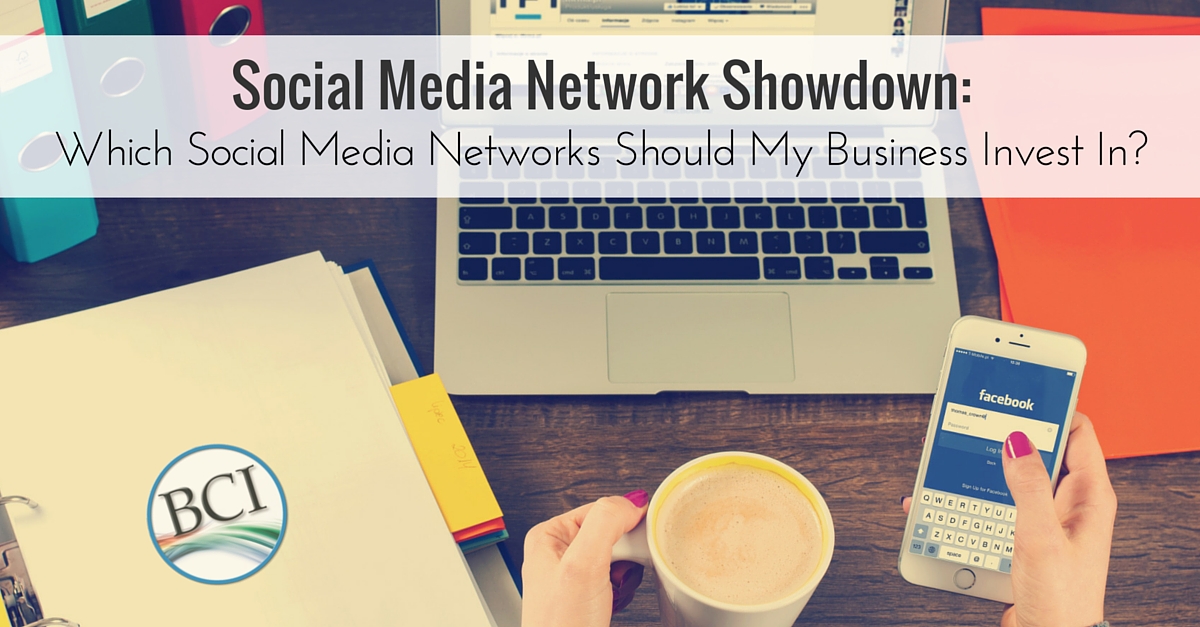 These are the six social networks covered here:

You can jump to each section from the link above.

Criteria for Evaluating a Social Investment

Here are some questions to ask to decide if a social network is right for your business:

Below you’ll find each network’s primary user demographics and the popular content types as well as an example of a brand that has built a loyal and engaged community of followers.

While the examples of brands making each network work for them provides a template of what your business might be able to do, what has worked in the past is certainly not the limit to what could work in the future.

It’s important to note that every successful campaign strategy begins with creative thinking about a business brand and the audience it serves. In other words, your brand story could break the mold and be the next case study of a business doing social right!

Pinterest users post images to the platform (usually images they came across while browsing the web, sometimes images or graphics they may have created or published themselves) sorting or categorizing them by theme or subject matter which other users can then follow or browse. Pinterest has become a hub of inspiration for creatively inclined people, 4 out of 5 of whom are women. The industry themes that thrive on Pinterest include:

Upscale cosmetic retailer Sephora joined Pinterest in 2012. The brand boasts more than 290,000 followers and 6,500 pins showcasing product lines, tutorials for how to use their products and beauty looks created with their products, in other words, their products at work.

Since Sephora began advertising on Pinterest, Pinterest became one of Sephora.com’s top ten sources of referral traffic. Not only is Sephora boosting its reach with Pinterest, but it’s also able to improve its offerings via the data collected through it. Sephora learns about their users and the products they are most interested in, along with other key marketing information, by mining their Pinterest data.

How new content will be used on Pinterest is a consideration of every new campaign. “When we create content for our site or emails, we think of additional ways that we can help the story along on Pinterest,” said Sephora CMO Julie Bornstein. “We use web analytics to look at top pins, test quote layouts from brand founders, and try different product shots — we spend time learning about what works and experiment often to get it right.”

On Instagram, users publish photos and videos (up to 15 seconds) dressed up with filters, user tagging and hashtags. Brands that succeed on Instagram are those with stories to tell, drawing users into the lifestyle the brand is portraying through the vignettes and characters featured in their photo stream.

The ice cream purveyor Ben & Jerry’s reached 9.8 million users on Instagram through a paid ad campaign on the network. The campaign consisted of 4 sponsored images of its ice cream disseminated among a target audience of 18- to 35-year-olds in the U.S. over eight days. The end result was greater top-of-mind recall, brand recognition and product demand.

“Since its launch, Instagram has provided us with an amazing platform to connect with our fans and tell our story visually. Ads on Instagram let us reach and engage with more fans about our flavors, fun and values,” said Mike Hayes, digital marketing manager at Ben & Jerry’s.

Also see 4 Reasons Your Retail Brand Needs to Be on Instagram Right Now.

Brands leading the way on Google+ include:

Read brand stories and case studies for each of these companies.

Like many other leading brands on Google+, British chocolatier Cadbury has leveraged Google+ to create conversations via Hangouts On Air.

“The thing that’s most different (on Google+) is Hangouts – you can’t really do it on any other platform. We’ve done three hangouts so far. The first one we created a chocolate version of our Google+ page. Then we did a second with Rebecca Adlington, one of the Olympians we’re sponsoring … We just met up with one of chocolate tasters and had an informal discussion on the basics of chocolate,” said Jerry Daykin, Cadbury’s social media and community manager.

“We spent quite a long time with our first Hangout thinking what will we do, when will we do what, and made it quite complicated in our head. And the reality was it’s as easy as having a conversation with someone face-to-face … My favorite feature about Hangouts On Air is the ability to have this really close connection to a small group of people but do it in a way that lets thousands of people see it.”

Among LinkedIn’s users are many owners, presidents, founders and C-Suite executives – i.e., people with the ability to make change, hire companies and acquire new talent. If you are a B2B company, LinkedIn provides a golden opportunity to market your company in front of businesses who can hire you.

“With LinkedIn, we’re able to truly identify our core audience by going a step further and targeting by company, job title, job function and groups,” said Dan Slagen, head of paid search marketing at HubSpot. “This gives us the unique ability to tailor messaging and target the exact audience segment that we need.”

For HubSpot, LinkedIn advertising resulted in a lower cost-per-click rate than with search engine advertising. Slagen said that the CPC averaged at $3, “which is actually a fraction of the cost of paid search advertising … on traditional PPC search engines, we’ve seen average CPC rates that are … as much as three times higher.”

Facebook: Local and National Brands Alike, but Come with a Budget

Facebook has been the dominant platform within the social media sphere for many years. It has the most users, and, speaking to its prominence users’ daily lives, 48 percent of 18-34 year old Facebook users check Facebook when they wake up. But when talking about Facebook as a marketing channel today, the discussion must begin with advertising.

If you’re considering investing in Facebook for your business, you should understand that you will likely need to dedicate an advertising budget for promoting your content on the network, even among your own fans. Without paid promotion, Facebook reportedly shows brand page content to a mere 1 to 2 percent of a page’s followers. In order for a brand page’s posts to show to its fans and followers, reach must be amplified by paid promotion.

On Facebook, national brands and local retailers alike successfully pay to play with the social networks. Global retailer Michael Kors, for example, was able to use Facebook ads to drive more than one million view to its sneaker videos, increasing brand awareness and sales.

Sam’s Chowder House, a locally owned restaurant in San Francisco, attributed a 19 percent increase in guests and revenues to Facebook’s promoted posts. The day after their most successful promoted posts, they experienced 58 percent sales increase and 22 percent guest count increase.

“Consumers who see Tweets from retailers are people who, for one reason or another, are engaged in conversation about or with that retailer. These people prove to also be much more likely to shop and buy from retailers’ websites … The results demonstrate that more exposure correlates with more retail activity.”

Here’s a photo tweet by @BruceClayInc of me speaking on social media marketing at a recent event in LA. Photos are easy to post to Twitter through the mobile app, and tend to get higher engagement than tweets without images.

As with Facebook, brands of all sizes and from all industries are using Twitter. Chicago bakery Whipped Bakeshop used a promoted account to increase followers in Philadelphia and attract new customer. The Barack Obama presidential campaign used promoted trends get keep voters informed in real time and gain record engagement in 2008. The American Red Cross used promoted tweets to drive donations (reaching 100% of its goal) and attract new volunteers.

Next Steps for a Social Media Marketing Strategy

Success in social media marketing is measured by the quality of interactions over the quantity of interaction. No matter how your business’s online social presence develops, it’s critical to determine and track metrics that align with your business goals so you can decide what’s working and what’s not.

As you’re deciding what social network to invest in, determine the metrics you’ll be tracking to measure your efforts. That way, when you’ve launched a campaign to build brand awareness, provide customer service, enhance visibility of your products, and grow loyalty, you’ll be able to tell if your efforts are making progress for your business and adjust your tactics accordingly.

If you’re interested in a free 15-minute social media review from me, BCI’s social media editor, and learning more about how we can help you build your online presence, let us know and we’ll be in touch!

Kristi Kellogg is a journalist, news hound, professional copywriter, and social (media) butterfly. Currently, she is a senior SEO content writer for Conde Nast. Her articles appear in newspapers, magazines, across the Internet and in books such as "Content Marketing Strategies for Professionals" and "The Media Relations Guidebook." Formerly, she was the social media editor at Bruce Clay Inc.

6 Replies to “Which Social Media Networks Should Your Business Invest In?”

Twitter is my favorite social networking site because of easily tweets.

Thank you kristi for this long article that help businesses to understand how they can find success in social network like branding and community building. Keep up the good work!

G+ seems like a no brainer if you into SEO , not really sold on the benefits of isntagram yet

Facebook for long time first business promoter isn’t it? As of social media.
Than must be G+, twitter and all other that was mention in article. But yes, now there are also a big profit could be acquired at photo and video based social media.
Thank you for really qualified article.

Nice post..Thank you for sharing this information!!