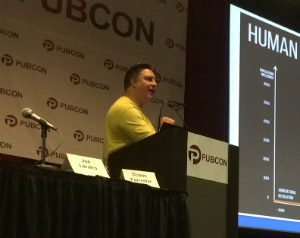 Bing’s face of search, Duane Forrester (@DuaneForrester), is going to deliver a lively keynote at Pubcon Las Vegas 2015. Titled “The Future of Search May Not Be What You Expect,” his stat-packed talk covers many topics, including:

Millennials were born between 1982 and 2004. Right now, they are between 10 and 34 years old. Many of them are entering their prime earning years right now. Also, they’re savers.

Millennials want to attach to a brand, but they are not loyal. They’ve watched the world economy melt down, personally. They’ve never known a time when there wasn’t the Internet. If you’re in the banking industry, you have a tough, tough road ahead of you.

They’re not into objects but experiences — if you sell products, stop it. Sell experiences instead.

They spend differently than previous generations, preferring to throw cash at new experiences and adventures and to reward socially responsible companies that they can connect with and deem authentic. It’s easiest to see this change in the food industry, where millennials are helping to disrupt the landscape of casual restaurants and boosting the earnings of chains such as Chipotle and Panera.

Millennials are spending the greatest amount of money in the coming year on fresh fruits, organic foods and natural products. Less favorable, in their minds, is spending on luxury goods, soda, applications and handbags.

An industry that millennials particularly dislike is banks.

Thoughts on Mobile and More

Forrester says the future of mobile is the seamless blending of the mobile with the functionality of a desktop — Samsung has a patent out for something called Project Arcadia, which will allow users to easily port Android and iOS apps across a billion Windows devices. Imagine a world where laptops and power cords aren’t necessary!

In the next two years, we’ll have ingestibles — we’ll be able to take a pill that will provide information for doctors about the inner workings of our body.

U.S. Starbucks is Winning at Mobile 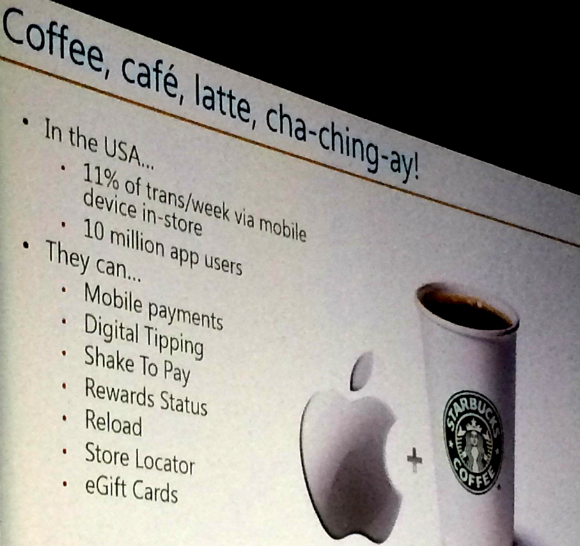 Forrester says that while he doesn’t enjoy Starbucks coffee, he loves the sense of community that comes with being a Starbucks consumer.

“I crave the moment when I flash my band in front of the register and the cashier is like, whoa that’s cool! I’m blowing minds one latte at a time,” says Forrester.

I’m blowing minds one latte at a time, says @DuaneForrester. 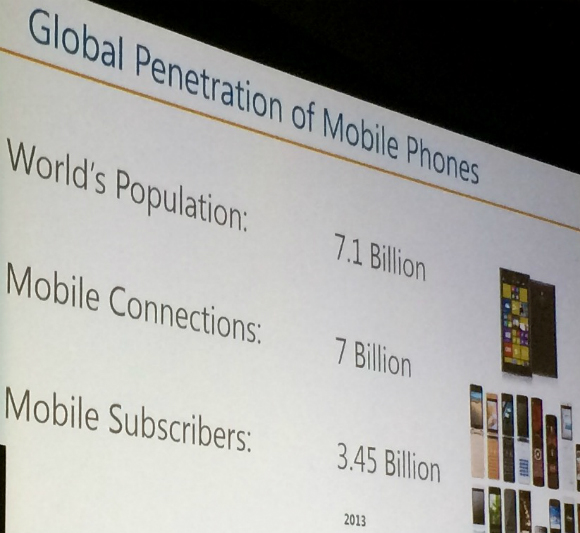 “I have a phablet and I swear I’ll never go back. I even edit Power Points on my phone. But the fact of the matter is it’s still a small device. Phones are small devices, so we have to be careful about what we show on these devices,” says Forrester.

In the next five years, we’ll have self-driving cars on the road — and that signals the end of the physical act of driving an automobile. We’ll be using our time better. During traffic, we can be working. Note:

Forrester sees a future where you can catch a ride with branded cars for free via affinity programs — if you’re willing to listen to a few ads: “This ride brought to you by Home Depot.”

All Your Data is Out There

Forrester says, “Data is the new oil.” Why? It’s the most valuable commodity in the world and it’s growing exponentially.

Right now, you’re leaking data. Data signals are everywhere. You might be concerned about this … but what can you do? According to the Federal Trade Commissions, Axciom has a minimum of three thousand data points on every single person in the U.S.

Axciom has a minimum of 3,000 data points on every person in the US, per @DuaneForrester keynote.

Where Are We Going? Machine Learning

Forrester quotes billionaire magnate Vinod Khosla: “In the next 20 years, machine learning will have more impact than mobile has.”

Forrester agrees. Search systems now have the raw data to start making sense of the world in which they exist. Examples of machine learning at work:

We can know everything.

The Future of Search

A time of limitless expectation and technology. Search is advancing:

One way into all the riches? Use Schema.org.

Imagine an Agent working for you to:

Imagine telling your Agent, “I need a cable for my phone,” and not having to think about it again until the cord shows up at your hotel. That’s the reality that’s coming. Your Agent will know what phone you have and what cord you need, where you’re staying, and be able to search to find a retailer who can deliver that phone to your hotel.

Will you be ready for the day search is internal, not external? When search is baked into every touchpoint we have? When it’s no longer a destination page, but something that brings you answers without your asking for them?

When considering the future of search, remember:

Thank you for sharing this excellent post. Being a SEO person I would definitely need this information.

My site deals with professional services (attorney/lawyer/law/legal concepts). The longer articles I have might be 2,000-3,000 words. That’s a lot to read on a small display. Given that the mobile market continues to grow, are there any stats showing whether shorter articles (500-1,000 words) are more popular with users on smart phones?

Great question. I don’t have any stats on that but now you’ve piqued my interest and I’ll be looking out. I do think there are things that can be done to make long articles more reader-friendly for mobile. For instance, include a sort of TOC (deep links to anchors in the article at the top of the article) so readers can jump to sections they’re looking for. It helps to remember that your mobile visitor is a different persona, they have different needs and interests. They probably aren’t the reader who’s going to look at long articles, but rather go straight to the contact page or about us page, to find out if they want to get in touch. Then optimize those pages for people who are on the go and in need. You may want to read another liveblog post from around this same time: http://www.bruceclay.com/blog/winning-at-mobile-ppc-advertising-smx-liveblog/. Aaron Levy’s presentation, “Know Your Mobile Audience,” is good food for thought on this subject. Thanks for reading, Michael!