At some point, you’ve probably heard Twitter labeled as shallow, vapid, useless, etc. — I know I’ve heard as much. And certainly, Twitter has its silly moments, but it is also a powerful platform — especially for a journalist, who has many of the same goals as a publisher. As a journalist, I’m sharing exactly how and why I wield Twitter as a part of my job for businesses curious about the usefulness of this social media tool for their own online brand building efforts.

1. Twitter lets you put your articles in front people who want to read them. 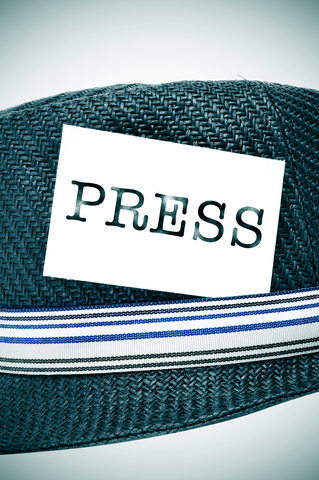 Building a personal brand — or the business of marketing yourself — is an advantageous pursuit for any journalist. A journalist’s goal is not to write articles that nobody reads. She investigates and interviews so that as many people as possible will read — and ideally benefit from — her work. She doesn’t write (nor does she get paid) for her articles to exist in a vacuum. Articles are meant to be shared, spread and read. Why would a community-minded journalist not share links on a social network with more than 218-million users, read: potential readers?

By strategically using Twitter (linking to her own content as well as other relevant content; engaging with her followers; sharing pertinent 140-character musings), she aims to build up her Twitter followers — and consequently her readership — over time.

Another reason a reporter/journalist/content strategist/writer-of-any-kind might take to Twitter is to connect with sources. How many emails must Search Engine Land Editor Matt McGee receive per day? Too many, would be my guess. When I was tracking him down for an interview as part of last month’s SMX East 2013 Interview Series I used the “contact the author” form available on one of McGee’s articles, but also alerted him via Twitter in an effort to, from my end, mark the message as urgent.

In one minute (!), McGee responded to my tweet. The opportunity to instantly connect with those outside one’s circle — that is the power of communication on Twitter.

@mattmcgee I just sent you an email via “contact the author” on @sengineland inquiring about an interview for Bruce Clay’s SEO Newsletter :)

@KristiKellogg thx – will look for it :-)

In another example of unexpected connections on Twitter, my friend, former colleague and longtime media professional John Garcia recently tweeted a picture of a misleading headline. His tweet mentioned actress and “Girls” creator @LenaDunham, and within ten minutes she responded: 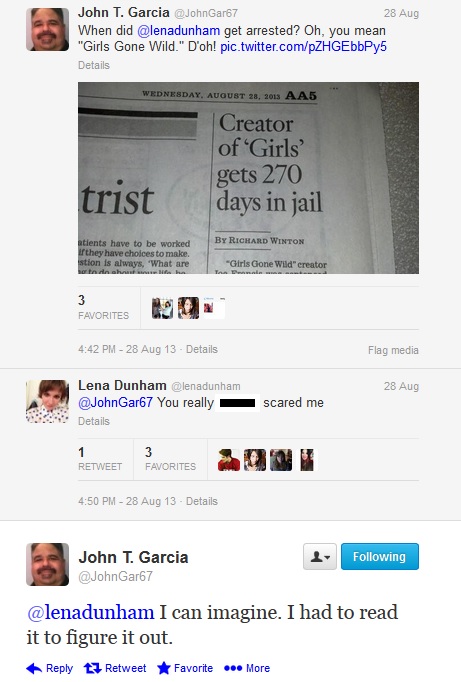 Garcia has also had Twitter exchanges with directors Lee Unkrich (“Toy Story 3”) and Brad Bird (“The Incredibles,” “Mission: Impossible – Ghost Protocol”). Without Twitter, these connections would be unlikely. Why use Twitter? Because people — even people like McGee and Dunham — are listening, and open to engaging with you.

Editors, actresses and directors aren’t the only sources Twitter can connect you with. In another example of a journalist wielding Twitter, New York Times science reporter Sabrina Tavernise cast a net for everyday sources just this morning:

I’m hoping to chat with people who will be affected by FDA painkiller changes. Please email me, sabrinat@nytimes.com http://t.co/azHCOEdmHL

In the same way that Twitter allows the journalist to connect with sources, it also allows readers to connect with the journalist. An active, responsive Twitter account is another way for readers to access you, and that accessibility is a trust signal. If journalists tweet and engage with users regularly, it’s not unreasonable to believe that they will continue to do so in the future. If a reader has a question, concern, rant or rave — they’ll be there, with an answer, clarification, etc. In some newspapers, phone numbers are included underneath bylines, and online, there’s often a link to “email the author.” Phone numbers, email options and Twitter accounts are all ways for readers to access the journalists delivering their news.

4. Twitter can be used as a research tool to gauge trends and interests or monitor up-to-the-second news.

If I’m intensely monitoring an event, trend or person, I often get information faster via Twitter than any other media source — and time is a valuable commodity for a journalist. I can create a feed in TweetDeck for any newsworthy hashtag or keyword phrase and watch tweets unfold in real time. Despite the joking over this new part of speech, hashtags serve an actual purpose — they’re a sorting mechanism. When you click on a hashtag, you can see all the tweets materializing with the hashtagged word or phrase.

Hashtags aren’t some sort of decoration for words — hashtags represent trends. Let’s say I’m writing a story on Penguin 2.1 and want to address people’s concerns about this minor update (minor in the sense that it impacts less than one percent of queries). As I brainstorm what to address, turning to Twitter and searching for tweets about “#penguinupdate” can be useful.

I am not alone in my conviction that Twitter is useful for journalists. The Associated Press includes the following list of “How Journalists Use Social Media in Their Work” in the AP Stylebook:

While Twitter is home to journalists like James Rainey, it’s also home to Beliebers, bots and, well, pop culture products like #starbucksdrakehands. Regardless, Twitter is what you make it. As a journalist, I can leverage Twitter to get in front of sources, gauge trends and interest, establish trust/recognition with readers and, of course, share links to valuable articles (including my own).

Really like your suggestion of using twitter to gauge trends. On a side note… like your plug on hashtags too! I would love to see people use #hashtags properly. : )

1. Twitter lets you put your articles in front people who want to read them.
4. Twitter can be used as a research tool to gauge trends and interests or monitor up-to-the-second news.
I am in favor with these two. You just spot on the good reasons why journalist should use Twitter. And this review is good. It will lighten up every journalist that uses only Facebook to target people, to be in front or to know the trends.
The two numbers are the things that social media network called Twitter can offer. This must be read by others. Glad you shared this! Nice and great post huh!

I found this post shared on Kingged.com, the IM social networking site, and I “kingged” it and left this comment.