Search Marketing > SEO > Beyond The Web: Why App Deep Linking Is The Next Big Thing

Beyond The Web: Why App Deep Linking Is The Next Big Thing

If you have an app, then app indexing should be more than on your radar — it should be a practice, according to the speakers of this lively SMX East session. Mariya Moeva, Emily Grossman, and Igal Stolpner all take the stage to offer convincing anecdotes and facts for why you should be implementing app indexing now. They also provide tips on how to do it.

Mariya Moeva: Get Your App Indexed with This One Weird Trick!

Here she’ll cover app indexing best practices. She says it will be practical, specific advice for people with apps.

Where are we with apps? The progress with app indexing is similar to where websites were in 1999. There are no set standards with apps as we have today, like with HTML and CSS, and we’re learning as we go. Google currently supports deep app links for signed in and signed out users on Android. Soon (in October, says Moeva) they will support iOS 9 universal links, and then you’ll see app deep linking in Google Search for iPhones in Safari, as well.

Google has indexed more than 50 billion app links, and the number is growing every day. Twenty-five percent of searches on Android return app deep links.

Visit g.co/appindexingstudies to see featured case studies. You can read these to ask yourself: does this makes sense to you? Have some accurate KPIs that you can measure so you can see if you’re getting what you want out of it.

Add your app to Google Search Console. You can see clicks and impressions for your content, as well as queries. You can also be part of their beta test by going here: g.co/SearchConsoleTester. 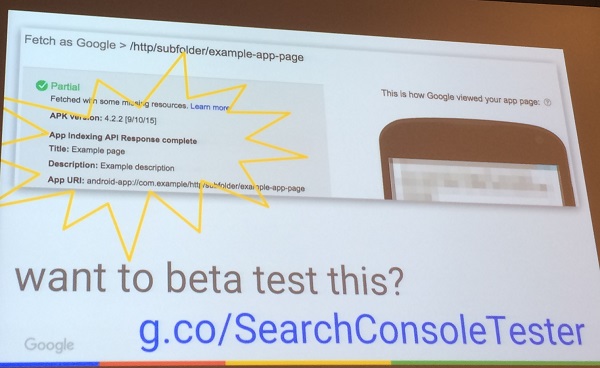 Google updated its infrastructure so that it can do deep linking for iOS. A year from now, she hopes for a shared standard that we can talk about that gets app content in front of users in the same way we have for websites.

Note: Here’s where you can find Google’s documentation on app indexing: https://developers.google.com/app-indexing/

Beyond The Web: Why App Deep Linking Is The Next Big Thing By Emily Grossman from Search Marketing Expo – SMX

The app store model relates to meta data providing a preview of the type of content that’s in the app. Until recently, Google wasn’t able to get inside of apps to understand what’s inside. That’s a problem if you’re Google and your goal is to index all the world’s data.

Now rather than an app store model, we’re looking at a search engine model powered by deep linking. A specific URL is assigned to an app screen in either of these ways.

Grossman shows the headline of an article she co-authored on Search Engine Land that explains how marketers can promote their app content in Google Search.

If you use custom scheme URLs, you have to do web markup. Here’s the deep link URL format: 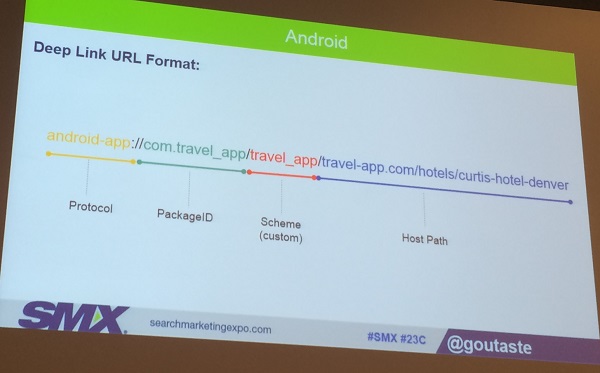 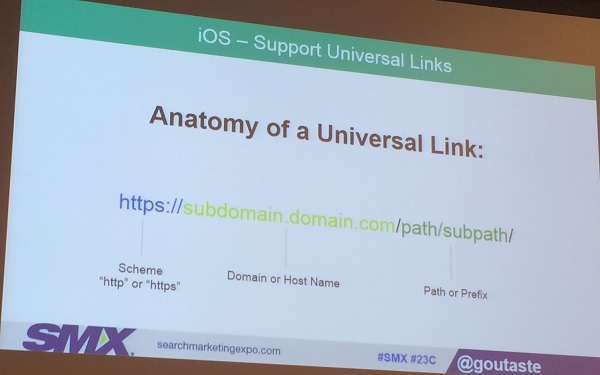 Requirements for app indexing to support universal links in iOS:

Get your app ready:

Get your server ready: 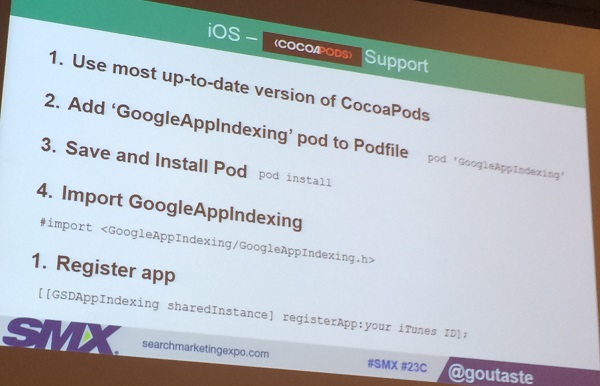 [Editor’s note: View the slide deck embedded above for more of the technical details.]

Apple is invested in getting users into apps because Apple’s made $9 billion on the App Store. Apple Search works with a public and private index. Results in Apple Search pull from both. 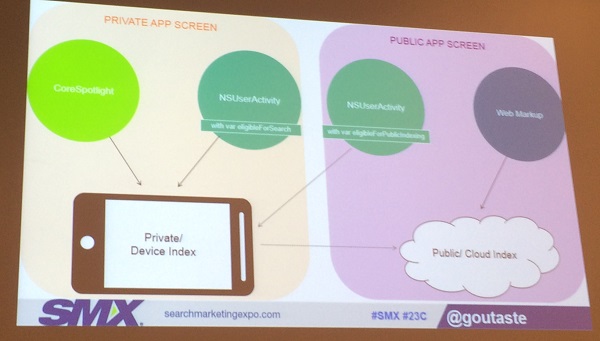 Using the App Search API Validation Tool, you’ll find out how Apple sees your app and how it will show up in search results.

Igal Stolpner: App Indexing Case Studies and Why You Should Invest in Deep Linking Too

Stolpner says he just now learned from Moeva that you can soon test an SDK (software development kit) before going live, and that’s a very big thing.

Apps and app indexing aren’t for everyone. Apps do a better job for his industry (finance) because:

They offer the same content on both apps and their mobile site. They discovered the apps brought more pages per session and more monthly visits per user.

Since implementing apps in early 2014, there’s been a drop in the number of non-daily users from 15 to 8 percent.

Why aim for app indexing? 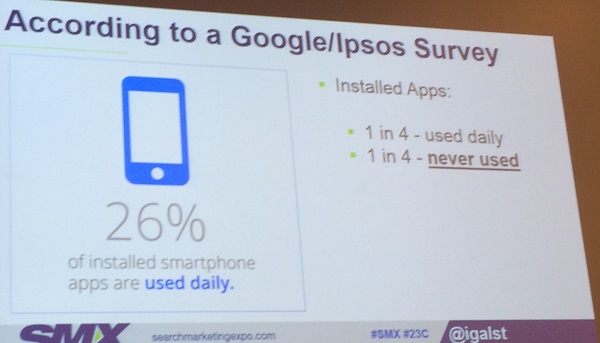 Users coming to the app from Google Search view 20 percent more screens in a session and spend longer in the app. If a user has the app installed, they’re getting higher rankings.

He suggests that you read the guides carefully. He also notes that the final quarter of 2015 begins tomorrow; invest in deep linking today.

Question for Moeva: Can you explain the ranking boost again?

If you have web content corresponding with an app page, you get a ranking boost.

Is the ranking boost given regardless, or just for high engagement?

There aren’t many apps using the API now, and those that are are all high quality, high engagement. As more apps join, they’ll tune and adjust.

Still on the hunt for actionable tips and insights? Each of these recent SEO posts is better than the last!
Bruce Clay on April 15, 2021

17 Ways to Boost Your Web Content Performance This Year
Bruce Clay on April 7, 2021