What happens when the clicks on your digital ads are not from interested people but from bad actors trying to take you down? What if that click is from a competitor trying to drain your budget? CMOs take note: This is click fraud and it’s still a concern.

According to one study by the University of Baltimore, invalid clicks will cost advertisers an estimated $23.7 billion globally by the end of 2020. 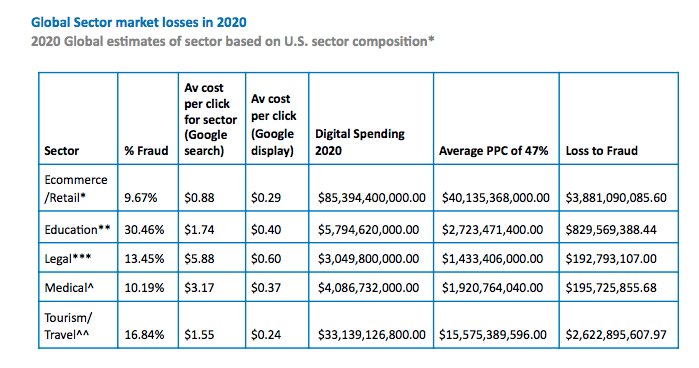 Bots are a big contributor to click fraud. And it’s estimated that bad bots made up about 24 percent of all web traffic last year.

Google says it tries to stop click fraud. The company uses a mix of automated detection and manual review to tackle this problem:

Our global team of over a hundred PhDs, data scientists, engineers, and researchers constantly monitors and analyzes traffic to prevent advertisers from paying for invalid clicks, impressions, views, or interactions, and stops publishers from generating invalid activity from receiving undeserved advertising income.

But the one click per day from differing incognito IP numbers at random times can easily fly under the radar. Does it matter? Maybe only if your pay-per-click keyword exceeds $900 per click as some do in the legal industry.

However, Google has said in the past that invalid clicks make up less than 10% of clicks, with only 0.02% negatively impacting advertisers.

Google makes money on clicks. Their goal is not to prevent clicks at all but rather to remove click billing until people stop complaining. It is all about stopping the worst and hoping nobody complains about the rest.

But many disagree. As a result, Google has seen its fair share of litigation over click fraud. At one point, it was estimated that Google had not refunded advertisers up to $75 million due to click fraud.

And it’s not just Google facing litigation over click fraud. Consider the litigation from one company against another. In 2017, a court awarded digital advertising company Wickfire $2.3 million in a click fraud case in which its competitor was found guilty of multiple schemes, including:

… Defendants clicked on Wickfire’s online advertisements for 12 to 14 hours a day over a period of months for the sole purpose of forcing Wickfire to pay for the clicks, and this clicking, which ultimately resulted in 4,080 clicks, could have run Wickfire out of business.

Google makes money on clicks, and I could easily argue that even though they have detection software, the goal is not to prevent clicks at all but rather to remove click billing until people stop complaining. It is all about stopping the worst and hoping nobody complains about the rest.

So what are the takeaways for CMOs?

This article is part of a series to summarize digital marketing topics in less than five minutes. If it helped you, please share it and subscribe to our blog.

However, there are others who disagree. So far, Google has been involved in a number of lawsuits alleging click fraud. Google was said to have lost up to $75 million in advertising revenue as a result of click fraud.

Truly, I have been a casualty of this google click extortion. Truth be told, I recall an episode wherein I sawed an enormous difference between the quantity of snaps announced inside my google show crusade and the reports of my investigation. I think click misrepresentation is more dynamic in showcase network crusades that search.

I really like your blog, thank you very much.

Yes, I have been a victim of this google click fraud. In fact, I remember an incident in which I sawed a huge contrast between the number of clicks reported inside my google display campaign and the reports of my analytics. I think click fraud is more active in display network campaigns that search.

Thanks for this article! I’d def. be more than happy to discover:
a) How to detect a click fraud
b) What can you do in order to prevent yourself from click frauds as much as possible.

Food for thought for the next article!

Ranky: Noted! Thank you for the good suggestions for a follow-up how-to article.

That’s why CMOs need to trust organic clicks and SEO more as it saves money for them, prevents them from answering the Board on ROI questions and CLTV from a organically acquired customer is way too higher as compared to PPC.

Search click fraud (making competitors spend more) is rare, and these days Google does a great job catching it.
Display click fraud is still huge because the site owners earn money from it.
Reducing it won’t change things much, in aggregate, if all advertisers have clearly defined ROAS targets/limits. Why? Because it is an auction, and if click fraud decreases, ROAS improves and advertisers will start bidding higher.

The paid search fraud we see in 2020 isn’t from competitors, it’s from Google directly – with their poor variant matching.