Search Marketing > SEO > Does Paid Inclusion Diminish Search Quality? Are Users Too Trusting? A Look Into Google’s Responsibility to Consumers

Does Paid Inclusion Diminish Search Quality? Are Users Too Trusting? A Look Into Google’s Responsibility to Consumers

Yesterday, MarketingLand.com published an exposée of sorts on Google and what seems to look like a “paid inclusion” model. Later that same day, an article from Wall Street Journal came out announcing Google’s “pay to play” model in its vertical search, Google Shopping. My initial reaction to anything Google does that’s business related is “Welp, Google is a business, after all,” but I wouldn’t be a true Web marketer if I didn’t scrutinize Google’s decisions to turn a profit, right?

I had to ask myself what the real issue was here. It’s not paid inclusion, or the fact that Google is trying to make money by monetizing its products; it’s that it seems as though Google isn’t always living by its MO of doing what’s best for the user. In this post, we’ll explore discrepancies in relevancy of the search results and Google’s vow to improve user experience. We find out that a search engine user’s level of knowledge (or lack thereof) can work to Google’s advantage, and why Google needs to be extra careful with this.

First, let’s talk paid inclusion. In Danny Sullivan’s post on Marketing Land, he discussed what seems to be paid inclusion in vertical search results for things like flight information and hotels.

When performing a search for something like flight information, sponsored results are featured in the search engine results page up towards the top (below ads and above organic). These sponsored results have an info button, that when hovered over, says that Google may be compensated for some of the listings.

In a conversation Sullivan had with Google’s Amit Singhal on the inclusion of sponsored listings in this manner, Singhal said they had a problem prior, where relevant results for specific queries like flight information simply weren’t being fulfilled, and Google needed to establish relationships or license data with information providers in vertical markets to provide that.

The sponsored listings area for results for flights gives flight data from multiple airlines right in the SERP, versus the organic listings, which take you to another website to do the same type of search.

The pro? Seemingly more simple for the user. The con? Commerce taken away from the top-ranked sites. Another con is that the sponsored listings promote flights directly from the airline. In comparison, the top-ranked sites are travel discount sites like Orbitz and Expedia, which offer less-expensive options for users. So is sponsored results really the best for the user experience?

Here’s what the SERP looks like for a search: “flights LA to Boston”: 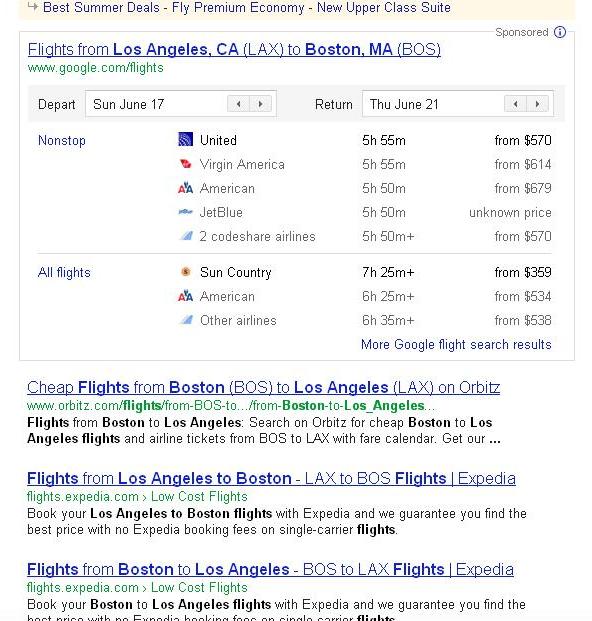 But playing the devil’s advocate here, isn’t it everyone’s responsibility to use search to the best of their ability to find what they need?

The problem lies in the ability of the user to know how to use a SERP. Does the average searcher understand the intricacies of a SERP, and is the page laid out in a manner that is clear enough for the user to understand? More on this later in the post.

The other problem lies in Google’s ability to provide that information to its users free of charge. I mean, it’s Google – they have some of the most brilliant people and technology of any company in the world, and they can’t figure out how to give the most relevant results for things like flight information? To add more fuel to the fire, Google announced its once-free vertical search Google Shopping will now have a pay to play model.

I talked to one of our developers here, Michael Terry, and asked him if it would be very difficult for Google to partner with airlines to get relevant flight information in its results. He had this to say:

“It would be trivial for an airline to provide an API for that. It’s quite possible they have an http API already for internal use; they’d just need to clean it up and document it to make it available for Google. So yeah, really easy for Google.”

So How Do You Pay for an Inclusion?

Sullivan was hard-pressed to find out how Google forges these sponsored relationships with these organizations. He found nothing in the Flights help section of Google that alluded to partnerships or inclusion.

But, I did find a bit of interesting info myself on a search features page for Google. A mention of where Google gets its flight data for the vertical search: OAG and QuickTrip by Innovata.

So if Google is licensing data from organizations such as these to provide better info to users, where does Google’s compensation come in — who is being compensated? It makes me think that strictly having a relationship with these data hubs was cause enough for Google to call them sponsored results, and that there may not be any direct paid inclusion at all.

In fact, in the Singhal interview mentioned earlier, Singhal did state that Google was playing it “super safe” by not calling them organic results because there was a “special relationship Google has established with someone.”

But if it is a paid inclusion, how does one get involved? Again, Sullivan mentioned in his article there wasn’t much in the way of finding information on this, but I did find one interesting tidbit on the topic of being listed in Google’s Hotel Finder search results, which led me to believe this could apply to other vertical searches in the future as well.

In the Hotel Finder help pages, Google says the following:

How can I include my hotel in Hotel Finder?
Hotel Finder uses multiple data sources to determine whether or not to display hotels in our product. So while no single measure can guarantee inclusion, there are steps you can take to help improve your presence on Google.

Yep, that link takes you to a page on the benefits of Google Places. So if there’s any takeaway here – especially in light of the changes going on with Places and Google Plus, it’s that you should probably be paying attention to your business listing there.

Age-Old Question: Is Google a Hypocrite?

Google touts user experience as its No. 1 priority. And while I don’t doubt that it upholds this through its stringent guidelines for sites in the index, does it uphold the same standards for its own products and services?

Back in January, Google announced a page layout algorithm update that looked at the layout of the Web page and the amount of content a user sees on the page once they click through to the result. Google says in its official blog post on the matter:

Rather than scrolling down the page past a slew of ads, users want to see content right away. So sites that don’t have much content “above-the-fold” can be affected by this change. If you click on a website and the part of the website you see first either doesn’t have a lot of visible content above-the-fold or dedicates a large fraction of the site’s initial screen real estate to ads, that’s not a very good user experience.

This seems like a good move on Google’s part; but it doesn’t seem like Google itself is following its own advice. Yesterday, I noted what the SERP looked like when performing a search for flights from L.A. to Boston: 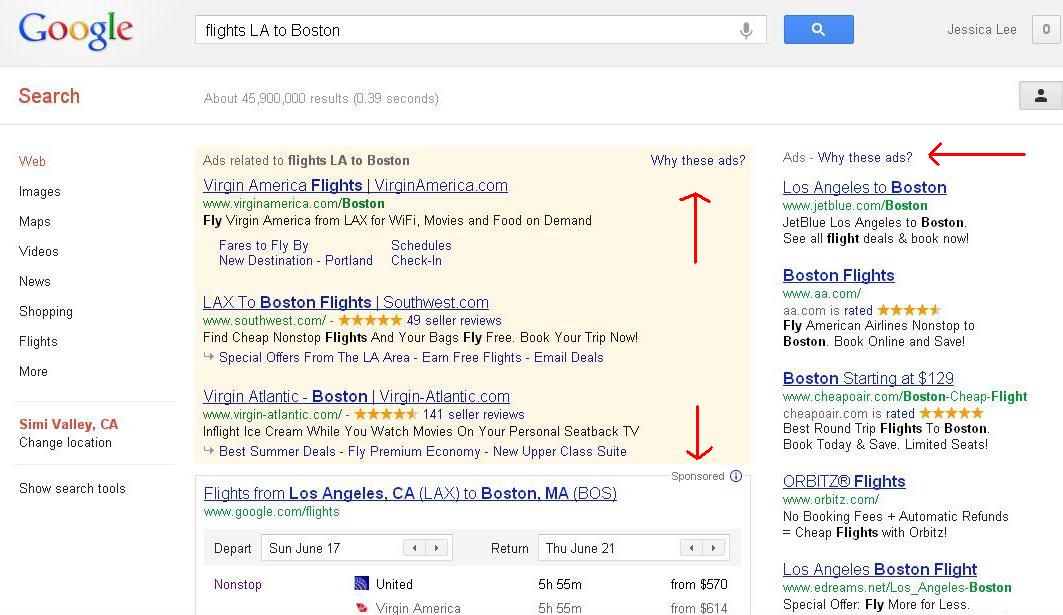 Do you see any organic listings above the fold? Neither do I.

The second part of the sponsored results equation as it relates to relevancy, is how much of a SERP an average user actually understands.

Back in 2005, Pew Internet, a division of PewResearchCenter, published a study that stated 62 percent of people couldn’t distinguish an ad from an organic result. Today, the population is much savvier on how to navigate a search engine, but you may or may not be surprised that it depends on things like age, income and even race.

This year, Pew published another study on search engine use and found that since the last study in 2004, perceptions of the fairness of the search results has barely changed. In 2004, 68 percent of users said search engines were a fair and unbiased source of information; in 2012, 66 percent of respondents said the same.

That’s a large population that never questions Google or its results.

And the younger the respondent, the more faith they had in the results they received. Seventy-two percent of 18 to 29 year-olds said search engines were a fair and unbiased source of info compared to 65 percent of 30 to 49 year-olds, and just 54 percent of users age 65 and older felt the same.

On the other hand, younger adults were reported to be more likely to spot conflicting or contradictory information in the search results, versus older adults who reported feeling overwhelmed by the results, and least likely to report critical information was missing.

Other interesting bits that highlight search engine users’ perception and experience include:

How does this all relate to the sponsored results and the idea of paid inclusion? I believe if all users truly understood what went into the layout of a SERP and how the information is rendered for both paid and organic listings, perhaps 66 percent of users wouldn’t think search engines like Google were a fair and unbiased source of information. Perhaps they’d begin to scrutinize it a bit more. And perhaps they’d demand more out of Google, changing the course of its path.

Stats like those I just outlined tell us that demographics and expectations will almost certainly drive the changing face of the SERP. The responsibility lies in how Google uses information like this. Will it take advantage of opportunities where the end result might not always be the in the best interest of users?

In the end, when it comes down to the question of Google monetizing its products, it’s not really about the business side, because of course a business is going to try and make profit. It’s about ensuring users have choices and a clear understanding of what they’re getting.

But does the responsibility lie solely in Google? No, as with any product a person buys or uses, they should work to understand it and essentially use it at their own risk. But the reality is that the typical consumer won’t try to understand the intricacies of the search engine. They expect Google to be on their side.

When it comes to things like Google’s product offerings, Google needs to be able to uphold standards across the board. That means practicing what they preach in every area. That means applying the same standards they expect of other businesses to their own products. That means balancing their mission for great user experience with their own business interests.