We’re here at the evening forum. Danny doesn’t have a presentation or agenda; he walks around and talks. Everyone here may be called upon to participate. We’re going to hear the assorted issues that the assembled community is experiencing. 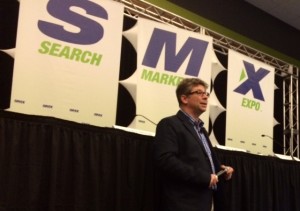 Question: If you have $500 to spend on marketing, where would you spend it? Context is small non-local brand.

Danny: First he’d make sure there’s a website. A lot of small businesses don’t even have that. Spend some of that money on your own domain name (instead of somesite.tumblr.com). He’s spend some time educating himself on SEO. He’d read Google’s own SEO tips guide. You never go wrong starting off with the things Google’s recommending. He’d spend time opening social media accounts on Facebook, Twitter, Google+ and possibly LinkedIn. If it was a location-based business he’d make sure he had a Google+ Biz page. As part of the SEO process he’d spend time understanding the key terms for his site. AdWords might be good to dip into to get a sense of the kind of traffic coming from those terms, but he’d probably spend more time learning about organic.

This conversation between Danny and the questioner evolves into a debate about black hat SEO as the questioner suggests black hat is one of the only ways to get fast traction in the organic space. I don’t have to tell you I disagree. Danny’s argument is that if your business is offering something uniquely valuable you’ll grow naturally. 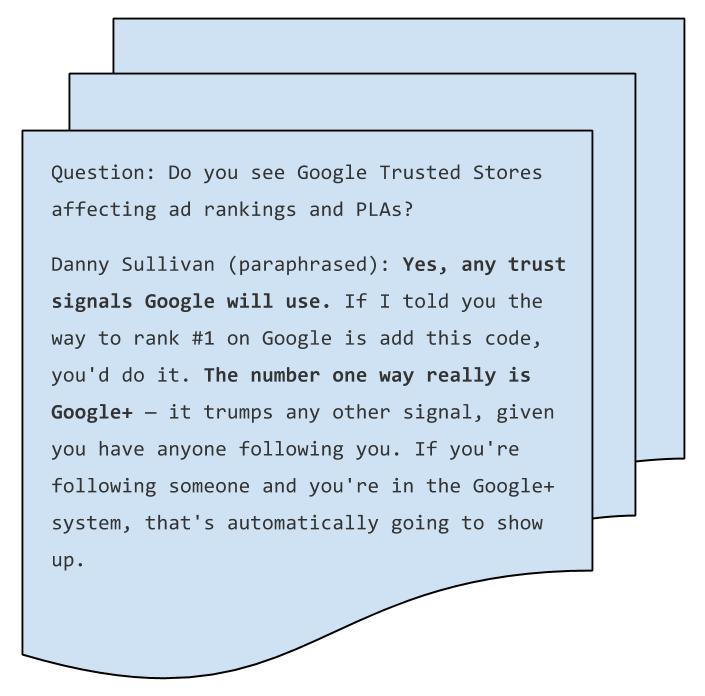 Question: What are the negative and positive directions that Google has been moving in, as far as our community is concerned?

Danny: Amit Singhal taking the time to come out is a sign that there’s some encouraging moves by Google toward the SEO community. Until that point there’ve been a lot of discouraging moves, like the shopping search engine that requires payment for inclusion as well as the switch to not-provided. There’s a big conflict between Google as a search engine and Google as a product provider and publisher. As an example, when Google purchased a travel content service there was then conflict for any travel sites that would then have to compete with a Google property. Danny has also been concerned by a convoluted system of links; it seems like it’s easier to just recommend “don’t get links” because it’s way too complicated. He wishes Google would just say we’ll count links we think are good and not count links we think are no good. That said, Google deserves credit for providing the majority (or big portion) of free traffic to websites.

Question: Given what we heard from Amit Singhal last night, what’s your gut feeling about what we’ll hear about not provided next?

Danny: He wrote up an article of 5 possible things that could happen in “Google Reviewing “Not Provided,” Withholding Keywords From Organic But Not Paid Search Clicks.” Most likely it’s one of two things:

1. Google will recommend making your site secure because in that case secure search and secure sites keep the chain and the web will be more secure as an added bonus.

2. Or the paid search terms will be turned off. Several times Amit mentioned talking to the ad team and you wouldn’t need to get them involved unless the change involved them. 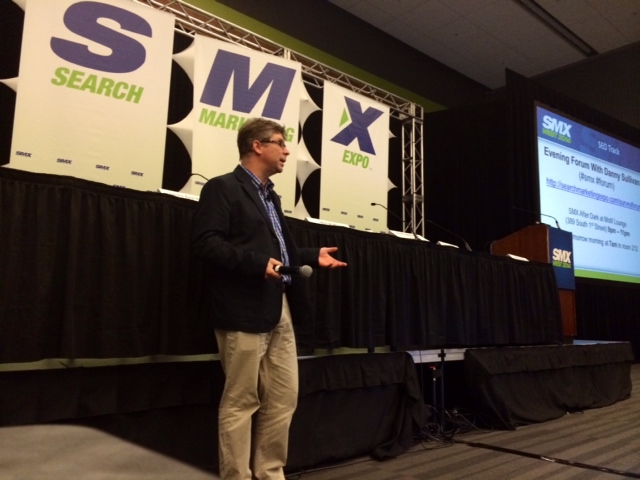 Question: From a coding and value add perspective should you use structured data markup?

Danny: Oh yeah. Any opportunity, especially when Google says you’d do well to do this, you should do. This is data that Google will need to add to their understanding of “things not strings.”

Question: I have a niche question and theory. When the great Authorship Apocalypse happened, authorship pics started disappearing. If you go into the Rich Snippets tool and you don’t have authorship set up you’ll see the publisher logo show up.

Danny: He thinks “publishership” is definitely coming, and may be just that Google is waiting to get more accurate with Authorship first.

Danny: Yes, any trust signals Google will use. Throw yourself into the Google system. If I told you the way to rank #1 on Google is add this code, you’d do it. The number one way really is Google+ — it trumps any other signal, given you have anyone following you. If you’re following someone and you’re in the Google+ system, that’s automatically going to show up.

Question Rant: Penguin was a disaster and Google penalized many sites doing things Google has been saying don’t do for years but a ton of innocent sites got pulled into the mess. Why isn’t the disavow list we SEOs are providing to Google not the direction that Google is going in as far as fighting spam?

Danny: Penguin was a disaster for innocent sites, you say? He won’t make that concession. Yes, innocent sites get caught up but most who claim that aren’t so clear cut. But the disavow tool is also a questionable move — a tool we wouldn’t need if Google didn’t just not count bad links they detect. When they don’t do that they open themselves up to the spectrum of negative SEO. He thinks there’s a misunderstanding that Penguin both penalized sites and took away the votes from bad links that previously counted for them.

Question: Our company is an education company and we sell programs to students to help them graduate. We do a good job at publisher type ranking efforts. We have a challenge with the authorship part of it. I think the easiest answer is to get our instructors authoring content but they’re very unreliable. They also know that their students aren’t in the Google+ space.

Danny: Have this conversation: the best way to rank on Google is to have a company Google+ account. Your website needs to be linked into Google+ so people understand there’s a connection between your brand there. Authorship ideally will be set up for each instructor, and it doesn’t matter if they don’t use it — it’s still a digital business card. 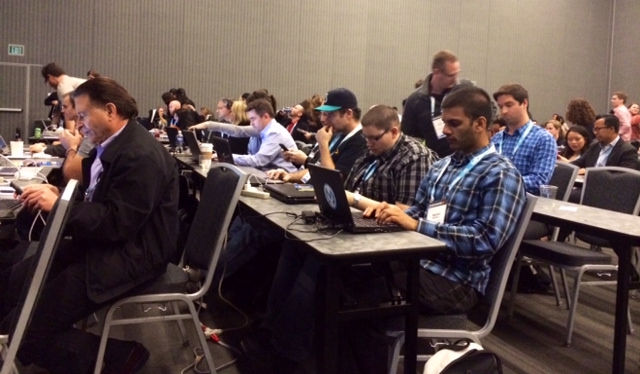 2 Replies to “#SMX Liveblog: Evening Forum with Danny Sullivan on Google and SEO”

Thanks Virginia – I really appreciate you posting this for those of us who couldn’t make it :-)