Confession time! (These are always so fun.) I indulge in the reality TV show called “Real Housewives of New York.” These privileged, confrontational ladies afford a guilty pleasure — a dash of intrigue and excitement I’d rather personally experience as a couch potato.

So on “Real Housewives of New York” last week, Crazy-Eyes Ramona went to a party that Holds-A-Grudge Jill was hosting for Kodak. Leave it to Ramona to break the ice with pleasantries along the lines of, “Jill, do you really want to be associated with Kodak, a dinosaur going out of business?”

Sorry Ramona, I beg to differ. You may have a successful line with HSN (pot, kettle, anyone?), but I think you’ve missed the point of the party. Kodak’s event promoted its online photo gallery. The site has all the functions you’d expect of the old-school photo line, like prints of all sizes and photo-adorned tchotchkes, but it’s clearly trying to get in line with the times with its emphasis on online sharing features. [Flailing around helplessly while you’re dying is still dying. Team Crazy Eyes! —Susan]

The online gallery launch is part of a larger effort to bring the company offerings into the new millennium. Adding to its inventory of things the company has in common with the Housewives, the old standby motto, “Kodak moment,” is getting a facelift.

Before, Kodak wanted consumers who experienced Kodak moments to use Brownies, Instamatics, Fun Savers or other Kodak cameras to take snapshots that would stimulate fond memories when looked at years later in albums.

The goal of the new meaning is to suggest that Kodak moments generate warm and fuzzy feelings only when photos, images and video clips are made available through social media, e-mail messages and other forms of sharing technology to parents, grandparents, friends, co-workers and even, these days, strangers.

See, girl. Kodak knows what’s up. And you, as much as anyone, understand it’s never too late to re-invent yourself.

Now, it’s certainly nice to see a traditional brand like Kodak exploring online communities, but you don’t need the deep pockets and on-site community built from the ground up to get social these days. Last week Facebook made it easier than ever for brands to tap into its network of 400 million engaged users and bring that interaction and activity to any site.

Today on SEM Synergy I interviewed Marty Weintraub, officially the president and founder of aimClear Search Marketing, and unofficially, a social media evangelist with a penchant for identifying the next great marketing opportunity. He walked me through the eight new Facebook social plugins released to developers at the f8 conference this month.

I don’t know if it was just me, but I totally missed the scope and potential of these plugins when they first came out because I was lost in the mounting pile of privacy leaks and Google-killer hype that dominated the conversation. Luckily Marty offered up a crash course to Facebook social plugins, and if you haven’t had a chance to look at them for yourself, his guided tour is a great place to start. 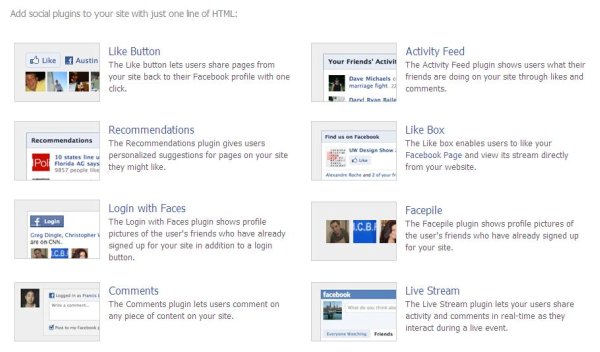 If you listen to the show you’ll hear Marty explain that not only have the stakes been raised in SEO, but more so, the power of a 400-million-strong fanatical network is now at the fingertips of marketers to integrate and leverage in promising new ways.

More and more, people are finding their cravings for a connection satisfied through their time spent online and the relationships shared there. Kodak gets that. Facebook gets that. And more and more businesses will start to get it, as frameworks for integrating social connections on a site find their way into the mainstream.

The prominence of Facebook isn’t the only evidence that social is a big piece of the Internet marketing and visibility pie. A University of Maryland study asked a group of college students to go without media for 24 hours. Would they do it? And if they did, how would they feel at the end of the day? Overwhelmingly, the students felt that they were missing their connection to the world. Cravings and anxiety plagued them. They felt isolated and cut off. The researchers’ conclusion: “Going without media meant, in their world, going without their friends and family.” [Unsurprisingly, for SEOs, the timeline to withdrawal is even less, a mere 45 minutes. —Susan] You’re right. We’re our own examples of how consumers live the habit.

Are you ready to let that kind of enthusiastic desire to connect pass your business by?

Too bad the chat room was down when Marty was on – he is always entertaining & an excellent speaker IMO.

Are you coming out to SMX Advanced in Seattle?

Michael, wasn’t that depressing?! Though I can’t be too sad because, yes, I’m going to Seattle! Susan and I will be liveblogging. :D