‘State of the Media’ — Keynote by @Jason Calacanis at #Pubcon

Good morning from the Las Vegas Convention Center. Last night Pubcon started with a warm reception and today the meat of the marketing material launches with a keynote address by Jason Calacanis, founder of Mahalo and a long-time VC investor in the industry.

Brett Tabke welcomes the crowd calling this “the networking conference where you get tuned into the industry.”

Jason introduces himself as a serial entrepreneur and rattles off a bunch of companies he was involved in launching, with Inside.com being the latest upcoming. Today he’s going to talk about the state of the media business, where it is today.

In 2012, the Internet had more ad rev than magazines, radio and newpapers, where TV has almost double what the Internet does. He says that the Internet will eventually consume TV. Sales of console hardware in the US is flat. Downloadable (digital) sales will overtake physical sales. The big story is the boom in mobile games. Social gaming and online casual games are flat to moderately up. Gaming is the #1 activity on mobile devices in terms of minutes spent.

What if the iPad and iPhone were consoles? They have more units in the field than the next 4 or 5 types of consoles combined. In-game revenue is the trend in buying on mobile. Another trend is that casual mobile gaming is the winning game type. Candy Crush makes $886K a day. AAA games (like Grand Theft Auto, which don’t cost a lot to make) and blockbuster movies are also doing big business.

Another trend: The microconsole market has emerged. These are like Ouya and Gamestick.
Prediction: XBOX One and PS4 save the console market. 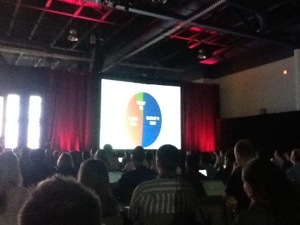 In this pie chart, YouTube is the slice at the top, with broadcast and cable placed as you go clockwise.

Cable vs. streaming subscriptions: Google Fiber will be in all American cities – this is not a test. There’s nothing stopping Google in this area in their will and resources to execute. Video streaming is the growth area, compared to cable, Dish, DirectTV. Consumers want control of their time and their spending more time streaming and more recording.

Internet TV is trending toward free. The Apple TV was introduced at $300, then went to $99 and now the Chromestick is $35 with 2 months of free Netflix. Jason says if there’s a hashtag to this talk its #googlewinseverything

Prediction: Google will buy NFL digital rights.
Prediction: Apple launches TV and buys Netflix. He explains his reasoning for this position, briefly that their new Mac Pro has 4k capabilities but not the technology and it would make sense to introduce it with the TV.
Prediction: Twitter take on YouTube. Twitter has been amassing video partners and it’s only a matter of time before they start splitting revenue with partners.
Prediction: Direct-to-consumer TV grows.

Worldwide film industry: consumers driving art is working against creativity. Making products that appeal to the whole world will water down the creative since international sales is where the majority of revenue comes from.
DVD sales will continue to drop.

Video streaming is the industry’s new hope. Crowdfunding is the great hope for new content. Major directors in addition to indy people are adopting Kickstarter, not necessarily for the money but to get the email addresses of their most interested and dedicated fans. It’s a marketing tactic and the system is being gamed when producers are then contributing to their Kickstarter to break their donation goal and get to promote that “achievment.” Still, finding your 1000 true fans and building deeper relationships with them is what he’s looking for as a signal on the investment side.

Online radio is growing and usage of AM/FM radio is most used in a car and dropping at home, work, on trains, busses and on the go. Pandora is the most popular radio channel today.

Trend: Public radio dominates podcasting. Why? People like branded shows, they remember them and can search for them. Direct-to-consumer radio is growing. Swell is the platform that’s dominating online talk radio. These new platforms will influence terrestrial radio. People will start identifying with verticals rather than stations. Vinyl album sales in the US shot up in 2007 thanks to the phenomenon of Hipsters. Spotify will be the next Netflix. YouTube is the “real Spotify” and there’s lots of ways to download and rip MP3s and videos from YouTube.

Prediction: Spotify grows from streaming service to record label. They will hit 20M paid subscribers and provide tour and merchandising support for artists.

Ebooks account for 23% of book sales. Ebook sales are expected to outpace hardcover books in the next 5 years. Indie books see major growth. Another trend is books are getting cheaper (low single digits to $10).

Fighting for survival and selling half as many ads. Subscription sales and single copies have been demolished. He says the only reason people buy single copies of magazines is the 15 minutes on the plane you can’t use your electronic devices, but that’s going away.

Top 10 Newspapers in the US by total subscribers: WSJ, NYT, USA Today, LA Times. NYTimes and WSJ has a good amount of online subscribers. The top 3 have made the jump and are being looked at for national issues coverage and other papers can only hope to be the local choice.

Prediction: Crowdfunded newspapers replace local papers and produce far better product. He says that someone will figure the Patch model out and names Curbed and Gothamist as doing well.

Search and display leads ad formats, and mobile ads are strong. Search – 46%, Display/banner – 21%, Classifieds – 7%, Mobile – 9% = percent of total ad spend in 2013 ($36.6 billion). The top new media sites are socially shareable, as opposed to the SEO strategized. Publishers have taken Google advertising, AdSense, off their site because they were pushing the publishers advertisers down the page; Google is good at selling based on what their readers like. Publishers have come to view Google as the enemy, not even wanting a Google pixel on their site.

Savvy publishers have figured out how to make socially shareable content (17 sexy apple pie shots you have to see) as opposed to content that attracts Google (how to make apple pie).

Native ads drive major revenue. Buzzfeed is the master of native ads. Expect the FTC to come down on this.

Trend: New faces in the newsroom. See Jeff Bezos buying the Washington Post for $250 million. “Put the reader first. Invent. And be patient.” Jason believes him and that we won’t have to worry about the news because of this, and other billionaires who want to see the world be serviced with great journalism.

All-star journalists are becoming very powerful. Kara Swisher and Walt Mossberg left the WSJ and are getting a big investment to start their own organization. Bill Simmons, called ESPN’s “shadow president” after creating Grantland and 30 for 30 series. This comes back to consumers driving creators and rewarding content they like.

The competition is fierce, if you take away anything from this presentation. Anyone can beat anyone – see all-star journalists and Candy Crush. The ability to make world-class product, design, UX and overall execution is what drives success.

Audience question: What’s the hot pitch today? Jason names 3 things: “Collaborative consumption” (AirBNB, sharing cars), the “Uber-fication” of everything (instantly getting whatever you want), and robotics combined with machine learning. We’re coming up on an era of great prosperity and no jobs. Technology is getting rid of jobs and it’s going to cause a lot of strife. In the post-job world there’s some ideas, like giving everyone a minimum monthly payment and he thinks this is the most sustainable model for when unemployment hits 30-40%.

Audience question: #googlewinseverything vs. publishers avoiding Google – how do you reconcile these? For a decade, Google told everyone they were going to be publishers’ best friends and Matt Cutts told them all how to do stuff for them. On the other side, Google figured out how to be the ones monetizing on all their publisher partner websites. Then, every week Google replaces its partners with its own services. Then Google took away tons of traffic from these partner sites with the penalties, resulting in these sites needing to lay off employees. What kind of partner is that? In advising businesses he always warns against trusting Google as a partner.

Awesome info and kudos on having an ad for the post so quickly! It worked!

very interesting news. Thanks for sharing!! :)