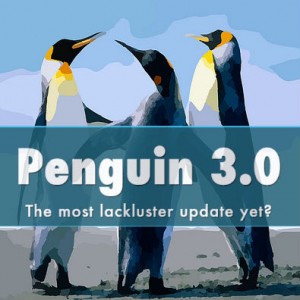 For 12-plus months, organic search marketers have been waiting for the Penguin 3.0 update that would allow reformed corner-cutting clients to claim full penalty recovery and regain SERP rank. With six months between updates set as the standard through 2012 and 2013, a full 12-month cycle between updates created quite the build up for Penguin 3.0.

So, when an Penguin 3.0 update was announced by Search Engine Land on October 19, significant SERP rank fluctuation was expected. Instead, what we’ve seen in the six days since the update can only be described as overwhelmingly underwhelming.

Speculations: Why Release an Update That’s Not Really an Update?

With so much anticipation leading up to the long overdue (in our opinion) release of Penguin 3.0, we can’t help but wonder: after a year, why would Google release a Penguin “update” that is so insignificantly affecting so many?

Here are four speculations we’ve cooked up in our internal discussions:

What Now? We Wait and See

With a substantial lack of data to show Penguin 3.0 significantly impacting the SERP space, or an at all, really, we can only continue to wait and speculate among ourselves.

If above-mentioned speculations one, two, or three are true (or near truth), the seismic Penguin update we’ve been holding our collective breath for could still, very well, be on the horizon. This means hope could still be in the cards for former corner-cutters who have been working hard to prune their backlink profiles and waiting patiently for the Penguin update that would result in penalty resolution.

If the more dramatic fourth speculation is closer to true, we’re in for a real game change. In the Search Traffic portion of their Webmaster Tools Help, Google goes to great lengths to teach webmasters how to disavow unnatural links and correct manual link penalties. We like to believe all this training and effort means something and that Google really does want what’s best for your site, and for the greater good. For that reason, we choose not to put too much weight on the Penguin-3.0-as-eternal-death-sentence speculation.

But, still, it all boils down to waiting and seeing.

The bottom line is that something has to give sooner than later.

We’ve been waiting over a year to see Google refresh the algorithmic elements that manage the analysis and judgment of backlink profiles so that reformers can see rank recovery. What we saw this week just wasn’t that update.

Here’s to hoping that update is coming our way…soon.

I am at the same point in Local SEO after a revision of Penguin was done. The first time I got hit by the update.

Thanks for sharing this article. I am facing ranking drop. My website dropped suddenly rank. Please help me how to get well rank.

VERY nice and informative article about Penguin update. Google has always been surprising us with new updates. Sometimes its hard to grasp the new update. You explained it in very simple language. Thanks.

Webstod: Keep in mind that Penguin is now part of Google’s core algorithm, running in real-time all the time. This post explains what changed back in 2016: https://www.bruceclay.com/blog/real-time-penguin-update/. Best to you!

Waiting for the updates. and iam suffering a lot in ranking my website, Rather it is going down day by day. Iam worried too, please someone help me how to imporve my ranking on google following the google algorithms.

Hi Brian – Penguin now works in real time and may not be the reason your rankings are falling. However, if you ever engaged in link buying, you may need to submit a disavow file and clean up your backlink profile. For general SEO help, check out our recent blog posts, the SEO Guide, or fill out our contact form for a free quote and consultation. I hope that helps you!

Thanks for shearing good article,
My website is facing crawling issue, website ranking dropped, how to get back ranking

In order for our sites to rank well for competitive terms, we need to adapt with Google quality policy changes. But with every update there also lots of confusion and misconception. If you have been badly hit by Google’s Penguin update, its time to revise your on-page optimization practices where you have gone wrong.

Good article. I saw some improvements and some drops as well after Penguin 3.0. Please keep us updated when you do discover the full potential of this penguin update.

Can do, Miraj. Thanks for chiming in!

Couldn’t agree more with this post, we can only speculate what is really coming. I highly doubt that Google is done yet and hope that we see some more action too, also interesting predictions on what could come.

I am at the same point in Local SEO after a revision of Penguin was done. The first time I got hit by the update.

In order for our sites to rank well for competitive terms, we need to adapt with Google quality policy changes. But with every update there also lots of confusion and misconception. If you have been badly hit by Google’s Penguin update, its time to revise your on-page optimization practices and correct where you have gone wrong.

Worli — In addition to revising your on-page optimization, I’d add that it’s critical that you assess and reassess your backlink profiles. Penguin in a linking penalty that penalizes manipulative or otherwise illegitimate inbound linking practices. Know who’s linking to you; never buy links; and use the Disavow tool when necessary and appropriate!

i wonder if someone do the bad practise to harm competitor website or blackmailing any website for some money for not getting harmed by google algorithm. i’m afraid there will be a new kind of business like punishment seo job.

Based on our analysis for the latest update, some of our client websites ranking dropped on average of 20-30 positions. And as we checked their impressions during that date, it showed that their was a drastic drop of percentage. But as we checked it again after couple of days, we notice that some of keywords are back on track and can be seen on SERP again.

I firmly believe that there is a great chance that the refresh is just a preparation of something bigger. They are preparing for changes in their guidelines to become more precise and way stricter that can lead to unforgettable punishment to the sites that cheat their way to be on top. This Google punishment will provide no hope for penalized sites to ever fully recover.

nice articles, impact of Google penguin 3.0. my website ranking has been remove from search engine. how can i do to get ranking in search engine.

I Completely disagree with this article , Almost 7 out of 10 client websites ranking dropped on average of 10-15 positions .

Also few of our pages got dropped as well . I’m better expecting news about SERP Fluctuation from webmasters

We love hearing case studies about how the update has been affecting other SEOs.

Wow! 70% of your clients dropped 10-15 positions. You’re right; that isn’t underwhelming at all. That’s pretty significant. We’ve been working consistently hard with our clients to make sure their backlink profiles are tidy and white hat, so we didn’t see any drops like this on our end. Our experience, on the other hand, has been more similar to what fellow commenter Andre Doshn is describing.

Thanks for sharing your experience; it’s always good to hear multiple sides of the story.

There are an excess of locales that I’m seeing that have done staggeringly careful cleanups, have a great base of regular connections, and still are positioning past page 10 for their principle decisive words.

On our front we have seen some decent recuperation of destinations hopping again on to page one in the wake of being stifled by Penguin for quite a while. Yet, we have a few situations where I KNOW they need to see change but they have not.

Hoping that this is the first of several rollouts of the “refresh,” that might be wishful thinking though. All things consider this refresh was not the same shakeup that had been seen with previous updates. Noticed very little changes in my own websites.

Well written article. Please keep us posted when you do discover the full potential of this update/refresh.

Good article. It’s encouraging in one sense, and also sad in another sense, to see you post that you haven’t seen a massive change across the board in rankings. Perhaps I’m naive, but I am still thinking that we will see more changes in the next few weeks. There are too many sites that I’m seeing that have done incredibly thorough cleanups, have a good base of natural links, and still are ranking beyond page 10 for their main keywords.

On our front we have seen some nice recoveries of sites jumping back on to page one after being suppressed by Penguin for a very long time. But, we have several cases where I KNOW they have to see improvement and yet they have not.

So, for those who are waiting…don’t lose hope.

Thanks for jumping in, Marie! We, too, are still hoping with our toes crossed that we will see more changes and SERP fluctuation happen in the next few weeks. As I noted in the article, this was an international-first rollout, so there is still a glimmer of hope that the best is yet to come.

Realistically, though… we’re thinking we’ve seen about as much as we’re going to see from Penguin 3.0 and we’re shifting our sites (and optimism) toward a post-holiday season 3.1 refresh that makes more of a splash. Maybe March 2015? March 2015 would make us happy. (No promises, of course!)

In closing… We (I) feel your pain — and the pain of those sites who have worked hard to reform and are still not seeing any recovery! I think a lot of SEOs are feeling this pain right now, actually. Here’s to flexing our patience muscles and waiting for the big changes that are (theoretically) right around the (theoretical) corner.