Pudding Is Delicious, Eavesdropping Is Not

A long, long time ago, when I was just a small girl, pudding was something that was yummy and delicious and would always somehow end up all over my face and between my fingers. However, now that I am grown, The Pudding is scary stalking software that eavesdrops on your phones calls and then tries to sell you stuff you don’t want based on what it hears. I miss old pudding; new Pudding gives me nightmares.

In case you’re enjoying yourself living under that rock, The Pudding is a new Web service that invites users to make free phone calls from their PC to any land line in the United States. The one small catch is that computers will be listening to your call and using voice recognition software to serve up relevant ads on screen. Of course, none of that is mentioned in their shiny press release. They simply talk about the "cool new dimensions" and "timely information" they’ll be giving you. Ooo, I trust them already!

Don’t worry if those little hairs on the back of your neck are standing up right now. So are mine.

Honestly, the entire Pudding concept terrifies and confuses me. Pudding Media’s CEO Ariel Maislos seems to think that privacy traded for personalized content is something the world is ready for. I’m not so sure. Even as the folks at TechCrunch try and compare Pudding to Gmail, I’m still not sure.

I mean, I get the argument, I do; but it just doesn’t work for me. There is a ginormous difference between allowing Google, a company I trust, to scan my emails for keywords, and letting a company I have never heard of listen in on my phone calls with voice recognition software. Especially when that company won’t even publicly acknowledge what it is they’re doing.

To try and ease privacy concerns, Pudding promises that they’re not keeping recordings or logs of past phone calls, and that ads are only being served based on a user’s current call. That’s nice. I’m sure lots of people will take their word for that. I’m not inclined to be that trusting, myself. It seems to me that the best way to prevent the government from subpoenaing the full transcript of my phone records at a later date is for them to never exist in the first place.

What I’m really kind of curious about is how this is going to work. According to the New York Times, this is what a normal ad will look like: 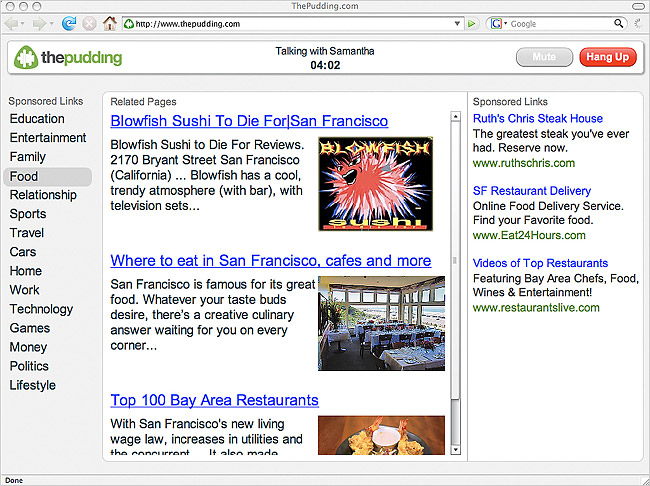 Okay, now I may not have done that well in math class, but to me, that looks more like 6 ads, not one. And here’s the bigger question – Can’t I just minimize that window and go on with my life, talking to my friend Samantha and ignoring all the ads? You would think that Pudding wouldn’t allow that, right? Which means that Pudding may actually freeze up your computer so that you physically can’t close the window, thereby rendering your computer useless. I’m sure that’s going to go over well with users.

Even if we forget about the creepy factor and the possible jamming up of a computer, I can’t see users declaring Pudding anything but universally annoying. Instead of being able to pay attention to their phone conversation, they’re going to have a page of ads staring them in the face. How long do you think it’ll be before they forget whatever it was they were talking about and just start talking about the ads themselves? [Apparently not very long. –Susan] This may be good for advertisers, but it’s probably not going to be good for your personal relationships.

3 Replies to “Pudding Is Delicious, Eavesdropping Is Not”

All discussions of the civil-liberties squick-factor aside (vital as they are), for this to work well, the voice recognition software has to be excellent. I’m just thinking about the way I lapse into my natural high-speed northern English accent when I call my parents; How many people speak in slow, measured tones when they’re chatting? How would it cope with foreign and regional accents? What are the chances the majority of ads will be completely irrelevant to the conversation?

This should be in the strange but true category!

It’s hard to imagine what they were even thinking when they were building this. There are other free services minus the creepy. So who in their right mind would sign up?