Social share buttons are a great way to spread the content you have deeper into networks across the Web – but which social share buttons are right for your site? Sometimes, the “catch-all” approach to buttons that we so often see isn’t the best route; you know, those widgets that produce a bunch of buttons for social communities for the sake of trying to reach everybody and their mother … Oftentimes, this can just confuse readers or make them think more than they should have to in order to share the content they like.

The Social Share Buttons We’re Getting Rid of and Why

Here’s a snapshot of the social share buttons on our newsletter article pages: 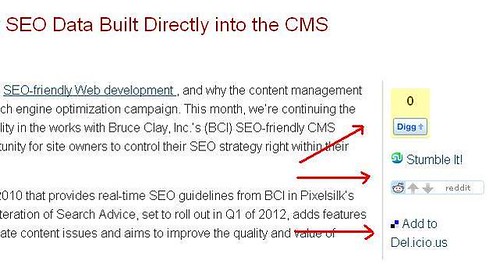 As you see, we have Digg, StumbleUpon, Reddit and Delicious. Looking at sitewide analytics, we saw that we did have traffic from all of those sources, but some more than others. And for many, there were specific stories behind the traffic. But, before we decided, we wanted to understand the health of the individual community and the types of audience it draws. 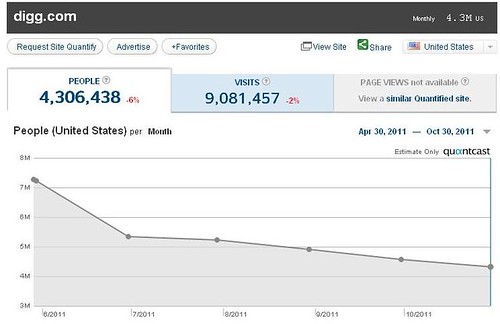 At this point, we were ready to delete the three social buttons we just discussed from our newsletter article pages, but we performed one final sanity check to see if any of them factored as strong social signals in the search algorithms. As far as we know, they don’t, so in the end, it didn’t look like any of these turned out to be significant to us.

StumbleUpon is a growing network that presents a lot of opportunity for people to share content (more than 1 billion referrals per month, according to data in this post on visualizing the StumbleUpon audience). StumbleUpon itself offers many resources for people to target and grow their intended audience, and has also been known to be a factor in content “staying” power. For us, it made sense to keep this button and further explore how we could maximize our presence in this community.

LinkedIn is an often-overlooked network that’s proving to be more and more important as a place for professionals of all industries to share ideas and content. If you’re feeling lost about how to best use LinkedIn for business, check out resources like “RockTheWorld with LinkedIn” – a webcast on WebmasterRadio.fm.

I don’t think much of a case is needed for this one. Facebook is where the eyes are, and is the volume leader in social networks. Not to mention certain search engines have reported using Facebook signals in its algorithm for search results. Looking in our analytics, we already receive a ton of traffic from Facebook. Bottom line: It’s probably never a bad idea to have a Facebook Like button on your Web content so it’s sharable there. If you want to learn more about this button and how it works, check out, “The Facebook Like Button, Dissected.”

Again, it’s hard to argue against the idea that a Twitter share button is good for pushing out content. With 80 million users (according to an October 2011 stat by Quantcast), the microblog Twitter is an ideal place to share good content and have it spread quickly. On our blog, Twitter is a popular way our audience shares content, and it’s considered a social signal in certain search algorithms. You can learn more about the power of tweets and retweets on rankingon SEOmoz.

While many might argue that Google’s social network, Google+, is only used by a niche community (comprised of lots of techies), one report predicts the network will reach 400 million users by the end of 2012, if it continues at the pace it’s going. The fact that the community is comprised of lots of tech people works in our favor; for businesses in other industries, it’s worth exploring whether Google+ and its +1 button is the right place to share content. When a person +1s content, it not only shows up in the Google+ community, but the endorsement can also be seen alongside search results. And as many of us know, these types of endorsements are becoming increasingly important for many reasons. Many are speculating what the Google +1 button will mean to the future of search. For us, we’re going to stick it out with this share button and see where it takes us.

How Do You Know if a Social Share Button Will Work for You?

There’s a million things that a person could examine in order to validate the use of one social share button over another. In fact, I could probably write a 10-part series on this if I really dug in. The important thing to remember is, whichever direction you choose, don’t just shoot in the dark.

Take the time to understand who your audience is, where they are spending their time online, how people are coming to your site and the long-term health of the social community before making decisions about which social share buttons you want to include on your Web content pages. The more choices a reader has, the more likely it is to cause analysis paralysis. And the messier your Web page might look with all the social share button clutter. Give fewer, more targeted options to make it easier for your visitors to choose and share content.

And test! Don’t just put a button up and then ignore it for the rest of your life. See if it’s working for you by extracting the important data to measure social share button success and their impact on your content goals.

Do you have thoughts on this topic? Please share with us below!

11 Replies to “How to Choose Social Media Share Buttons”

SEO thing is not a steady thing… Every year different algo are used to rank up pages. Comes to that, different social media may emerge, so you have to update your site on what social media button is more useful to generate links as well as reach your potential audience…

Is it worth using social media buttons at all? I much prefer RSS.

I added social media but when you have several different types it is difficult to assess which ones, if any, are contributing to traffic growth. It is also difficult to assess 2nd and 3rd order effects of the sharing of information across the web. Any good tools to help quantify this?

In my (VERY) novice experimentation I’ve found some interesting information about who is going to my site. It is mainly organic searches (google, bing, etc.) that is driving traffic – not social media.

Although I still think it is necessary to have sharing options on my site – I won’t be driven by it. I will focus mainly on SEO and of course great content!

And personally – as to location – most folks see share buttons on the bottom of an article. But there as like in this post you can put it at the top AND the bottom. Or there are tricks to have an option to the left that “floats”. Tons of options out there – only way to really find out for your site is experiment and get feedback from your user base.

Thanks for describing how you’ve been refining your use of these buttons. My main site has not employed them at all until recently so, this is very timely and helpful. As my site update project progresses I’ll be watching to see which communities generate interest and traffic.

Hi Nick — agreed and thanks so much for taking the time to opine!

There are hundreds of social sites to share content, but the question is- are they relevant to your audience? There really is no sense in including every single social share button on your content. It just causes clutter. Great points that testing is key and it’s important to actually spend time figuring out which buttons would be essential for your individual strategy. Obviously no two businesses are the same.

Hey, my pleasure, Patrick. Thank you for reading and taking the time to comment!

Hey Jessica……..Thanks so much for this post. You’ve shared so much insight and information that is greatly appreciated. Your information is very useful for social networking sites. Social media share buttons are a great way to spread the content.

Hey Robert — thanks for your kind words and the question. I’m still doing some research on that, but some data show people tend to like, +1 or share after reading the content versus before reading, so it seems like a good idea to have it be accessible at the end of the content. Mashable wrote a code that allows for a floating share dashboard that follows the reader while he or she scrolls — we’re thinking about implementing that. You can find it in this post: http://mashable.com/2011/03/11/add-social-sharing-buttons/. I’ll share more on this topic as I delve in.

Great information Jessica. I have a question about position. Where do you like to position your social media share buttons and why? I know positioning has a lot to do with the effectiveness of how much the buttons get used.