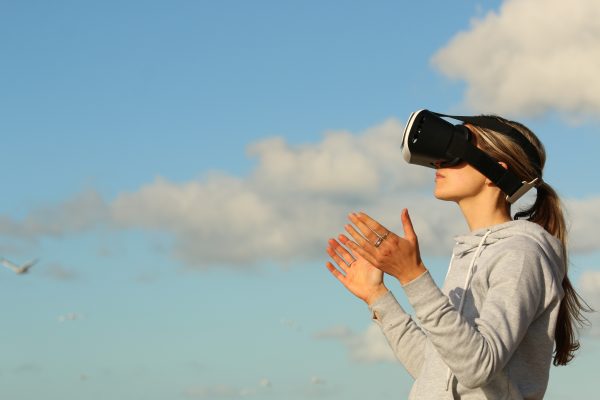 Imagine putting on a virtual reality headset and joining your favorite social media platform as a highly interactive experience with friends.

Imagine shopping for a new dining table by picking up your phone and seeing the table in your dining room, as though you’re taking a video of it right before your eyes.

Sound a little like the holodeck in “Star Trek”? Yes, but this may not be science fiction in the near future.

The opportunity to engage with one another, see new places and reach a mass audience will create opportunities to shop with a confidence never before available from the comfort of your home. This is what’s available through virtual reality, the newest form of marketing.

Creative digital marketing strategies will usher brands into the virtual reality realm. Read on for an idea of:

What Is Virtual Reality?

There can be some confusion about what virtual reality is. What does VR actually do? How does it work? What am I going to look like with that headset on my face?

Let’s first get clear on the definition of virtual reality (VR). When we talk about VR, we’re talking about a computer-generated simulation of a 3D environment you can interact with using special equipment like goggles with a screen and sensors you hold in your hands.

The key is that true virtual reality meets a few requirements:

How People Are Using VR Today

People are using the term VR as an umbrella term for a variety of experiences. Purists consider VR to be technology that accounts for user perspective, interactivity and navigation. But you might also hear “VR” used to describe 360 videos, like those you might have seen on Facebook or YouTube, where you can move your phone around to see a 360-degree view from where the photographer stood.

Basically, under the VR umbrella, there are four major flavors of virtual reality, depending on the technology used and whether the environment is 2D or 3D.

Here’s an example of 360-degree video (note how you have the control to move the screen any direction you wish during the video):

Google is betting big on VR, and Google positioned its Daydream View smartphone headset released last November to be one of the ways that affordable VR tech gets into the hands of the mainstream. Apps for Daydream, and other smartphone headsets like the Samsung Gear VR, include Netflix, HBO and a growing list of games. More on how the entertainment industry is going to be one of the first industries impacted by VR below …

How Virtual Reality Will Impact Businesses

VR will eventually transform much of how we live and work online, although some sectors may embrace virtual reality sooner than others — and for different reasons.

Entertainment is the sector where we’re seeing the fastest movement in VR. Product catalogs are also being enhanced with virtual reality as we speak.

The travel industry may use virtual reality marketing to entice potential travelers to their destinations.

The education sector may use VR as a way to bring concepts to life in the classroom, or to allow people to complete their university degrees from afar.

Let’s look closer at how some industries are using VR …

Virtual Reality and the Entertainment Industry

Immersive movie and gaming experiences may be the gateway to getting a VR device into households. Right now, VR is finding the most use here.

As a result, expect to see premium VR series and film content (not necessarily paid) coming from YouTube this year.

Experiencing a concert in virtual reality may not be too far off. Experts predict that paying for a VR concert would be an easy win, and in the future, may be an important revenue stream for musicians and producers. It could also free musicians from renting expensive venues.

Companies like VRTIFY are popping up, too. VRTIFY transforms music into fully immersive experiences using a variety of technologies, including VR.

A close cousin to VR is augmented reality (AR). AR is the technology in which you look at a screen reflecting your current environment and see a virtual layer on top of it. IKEA’s ground-breaking 2014 furniture catalog is a prime example of AR assisted shopping.

If you’re selling products, you should know about Augment.com. This service lets retailers and manufacturers put their product catalogs into an augmented reality shopping experience, like IKEA’s.

Interior design and architectural design are seeing advantages of envisioning a room or building before it is composed. Seeing an interior or building design come to life before committing with cash has obvious appeal. There are a growing number of apps and services that let users design a room with floor plans, wall color and trim, furniture and decor, then pop their smartphone into a VR headset to see their interior design in virtual reality.

Virtual Reality and the Travel Industry

Some businesses in the travel sector are already taking advantage of VR marketing.

Marriott delivers virtual travel experiences via a “teleporter station” and an Oculus Rift headset, transporting people to the beaches of Hawaii and the chic lobby bars of their hotels.

Several travel companies are already using VR to create their own promotional videos:

“We see virtual reality as an innovation that will change the travel business,” says Marco Ryan, chief digital officer for Thomas Cook Group, a U.K.-based tour operator that began testing VR content last year to boost sales. “The closer you get to the destination, the more excited you are to have that experience” — i.e., buy that experience.

To take advantage of the compelling VR experience and close the gap between the lack of VR headset owners and the consumers, “some VR producers set up at trade shows, shopping malls, pop-up stores and even on the street where they can provide the headsets.”

Virtual Reality and the Education Industry

There are already several niche companies out there that specialize in curriculum, content and teacher training around VR like Immersive VR Education.

In 2015, Google jumped on VR education and launched Expeditions, a way for teachers to take their students on virtual field trips around the world.

Virtual Reality, and the Future of Marketing and Advertising

No matter what industry you’re in, virtual reality marketing may become part of your mix in the not-so-distant future.

Whether it’s through the storytelling power of VR content and experiences, or advertising placements within a virtual reality world, start thinking now about how your brand might fit in.

Think with Google believes that the medium has the potential to make any message even more impactful saying VR is an “incredibly powerful tool to create empathy. When a viewer feels like they are there, they have a greater sense of the situation. Messages become more impactful.”

Given that Facebook owns Oculus VR, it’s likely that social media will be a big catalyst for the adoption of VR among the masses. Once there’s money and connections to be made there, its adoption will likely become more mainstream.

In my 2017 digital marketing predictions, I predicted new forms of behavior around virtual chat rooms this year. Social media platforms are innovating new means of online engagement instead of meeting people in person.

Why Being Virtual Will Be Virtually Mandatory

Virtual reality headsets are a solution waiting for a problem. The problem is what your target audience wants and needs. The technology is just a new way to give it to them.

The only thing standing in the way of VR right now is the adoption of this new technology. To move it to mass consumption will take a catalyst — catering to the desires of your consumers.

Once this mass adoption begins, it may already be too late to be an early adopter.

So, as you think about how to continually be where your customer has a need, consider exploring new technologies like virtual reality to evolve your brand’s storytelling, marketing and advertising strategies.

I want to know if you can imagine your brand in the VR space. Tell me about it in the comments below.

Virtual reality marketing is still in the future, but your cutting-edge digital strategy should be a work in progress. Partner with a digital marketing agency and stand out above your competition today and tomorrow. Give us a call or start talks today.

Intriguing Article! VR will change item advertising as we probably am aware it.

Who knew that the old view master of the 70’s would inspire so much forward thinking..

LOL…That is where my head went right off.
Great article Bruce Clay,thanks for sharing.

Interesting Article! VR is going to change product marketing as we know it.

Thanks for this article.

Amazing factful article…. really VR/AR will change the phase of marketing business online. This will bring changes in every business model online… great future ahead.
Thanks for sharing

I won’t go that far! It will be an opportunity for some design and decorations shops, also for some museums, but not for all customers.

Don’t forget the awesome effect VR/AR (or as Bartley calls it, MR) on product catalogs, Lorna! :)

We’ve developed five different VR appliance servers that address a broader range of solutions than what you’ve covered here. Including Crime Scene Reconstruction for law enforcement, 3D spinning products for appliances sold on-line and a 3D flooring kiosk simulator with HP that rolls out this summer.

We even created a Google Daydream VR server.

For us, 360 AR / VR is more like MR (Mixed Reality). We blend photographic reality with augmented reality in a clever way that requires no programming or understanding of Unity 3D.

Bartley, that’s awesome! Great to have someone with such advanced domain knowledge jump into the conversation. Mixed reality sounds like the right terminology here. Thanks for sharing with us!